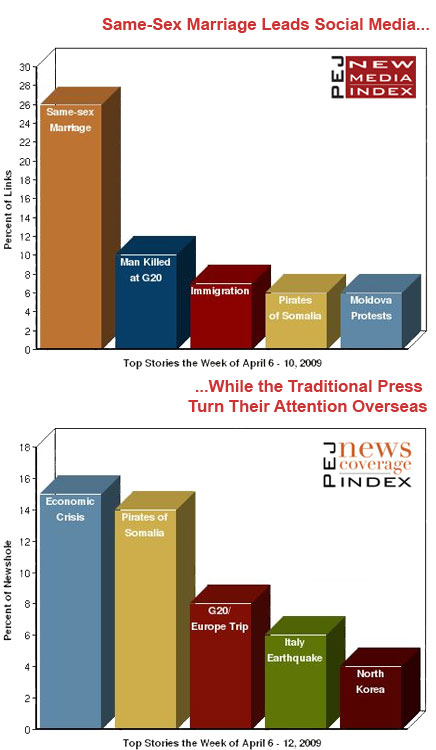 In a week that saw landmark same-sex marriage votes in Vermont and Washington, D.C., bloggers devoted far more attention to that story than any other-with most applauding the legislative gains for gay couples.

More than a quarter of the links (26%) by blogs and social media sites from April 6-10 focused on the gay-marriage issue, according to the New Media Index from the Pew Research Center’s Project for Excellence in Journalism. That differed dramatically from the traditional press, which devoted only 1% of last week’s newshole to gay marriage, making it the No. 15 story in the mainstream media agenda.

The second largest story online last week, with 10% of the links, was a video and report on the Guardian Web site concerning an April 1 incident in which a man named Ian Tomlinson was knocked to the ground by police while walking through the protest area during the G20 Summit in London. Moments after the encounter, Tomlinson suffered a heart attack and died. The Guardian article called into question the version of events offered by the police.

The third largest story (at 7%) was an April 8 report in the New York Times that suggested Obama was going to push for immigration reform despite the political challenges involved with the divisive issue.

Fourth (at 6%) was the drama that ensued when Somali pirates targeted a U.S. merchant ship and took Captain Richard Phillips hostage. Bloggers responded to reports such as the April 9 story on CNN.com that described how a warship was nearing the pirates’ boat. (The standoff ended on April 12 when Navy sharpshooters killed three pirates and rescued the captain.)

The fifth-largest story last week, also at 6%, was another subject that received scant attention in the traditional press. On April 7, the New York Times published a story about protests in Moldova against the Communist leadership. The storyline that caught the attention of bloggers was how protestors had used the popular online communication tools Twitter and Facebook to organize and gain support.

The traditional media did include some of the same subjects among its top-five stories last week, such as the piracy saga and Obama’s overseas trip. But their European coverage was different in that it centered more on the politics and geopolitical implications of Obama’s trip. The traditional press also focused on several stories that did not garner much online attention at all, such as the U.S. economic crisis (the No. 1 story), the devastating earthquake in Italy and the controversial missile test by North Korea.

These are some of the findings of the PEJ’s New Media Index for the week of April 6-10. The index is an effort to monitor the content appearing in new media platforms. The biggest element of this Index is what appears in the more than 100 million blogs and other social media web pages concerned with national news and public affairs tracked by two monitoring sites, Technorati and Icerocket. Both track the commentary online by identifying what news stories bloggers and other websites link to. Each weekday, PEJ captures the top linked-to stories and analyzes their content. It then compares those findings with the results of its weekly analysis of more mainstream media, the weekly News Coverage Index. The Project also tracks the most popular news videos on YouTube each week.

On April 7, Vermont legislators voted to allow same-sex couples to marry and Washington, D.C.’s Council voted to recognize gay nuptials that had been performed elsewhere. Coming on the heels of a decision by the Iowa Supreme Court to allow same-sex marriages the previous week, gay marriage supporters cheered what they saw as the growing political momentum behind their cause.

"I like the direction the fight for equal rights for gay people is taking! Iowa, Vermont, and now D.C.! Excellent!" proclaimed Rebecca Hartong.

"Get down with your bad self, Vermont," praised somewaterytart. "What was that we said the other day about inevitability? May the train roll onward."

"It’s been an amazing last few days for gay rights in America," declared Collin Kelley. "The Vermont legislature approved same-sex marriage, so I guess that means the Christian right-wing crazies and their Republican cohorts will have to find someone else to blame besides ‘activist judges.’"

While most bloggers who linked to the reports applauded the developments, a minority were critical of what they saw as an ominous turn of events.

"While we Christians should abhor the events that have taken place in Vermont," warned Nathaniel Darnell, "more concerning to to us than the legalization of sodomy should be the Church’s failure to proclaim the Law of God and the failure of fathers to train their sons in manliness."*

"Most Americans do not agree with ‘gay marriage’ and traditional marriage has served as the backbone of Western civilization…" said Mr. Grey Ghost on the blog Politik Ditto. "Indeed, for liberals, marriage has become nothing but another instrument to exploit their self-serving, immoral agenda-and the needy pols are right there along with them to open the door."

Death at the G20 Summit

The second biggest story online last week was one that demonstrated the power of Internet reporting. The British Guardian ran a story and posted a video showing British police pushing Ian Tomlinson to the ground as he walked near protestors at the G20 Summit. Tomlinson arose, but according to media reports, died minutes later. The official police statement did not acknowledge any confrontation with Tomlinson and claimed efforts by medics to help him were delayed by the nearby protestors. The footage outraged many.

"I watched it about 20 minutes ago and my heart is still racing," wrote James Graham on the Quaequam Blog. "More than anything, it frightens me. That could have been me, minding my own business…This is what it feels like to be afraid of the state."

"This really frightens me, especially when you couple it with the official version of what happened," echoed Brilliantology. "I hope this gets a lot of reblogs (Brits, do your duty!), because this is absolutely disgusting and the authorities should not be allowed to bury it."

On April 8, the New York Times reported that Obama was planning on pushing for immigration reform as one of his priorities, despite potential political difficulties and the challenges posed by the recession.

Those who opposed the idea, a solid majority of the commentators, warned of populist outrage to come.

"This is political suicide – I can only figure that Obama will push it either because Obama is really, really stupid or that the hispanic groups have gained so much leverage over the Democrat party that they can’t be refused," figured Mark Noonan on Blogs for Victory. "We shall see if this actually comes to pass-but, if it does, I’ll gladly accept the rather large number of GOP seats we’ll get out of it."

"Democrats will push to legalize millions of illegal immigrants this year thus enslaving America under their socialist agenda for decades. This comes as no surprise," warned Gateway Pundit.

Demonstrating the world-wide appeal of YouTube, the five most-viewed news videos from last week were about overseas events-including four that related to Obama’s trip to Europe and the G20 Summit.

The most popular individual video was footage of the playful exchange between President Obama and Italian Prime Minister Silvio Berlusconi as world leaders were gathering for a photo opportunity. According to some reports, Queen Elizabeth was startled by the interplay between the two heads of state.

Note: Technorati’s list of top-linked to stories, due to technical errors, was not updated for Monday, April 6 or Tuesday, April 7. Therefore, this week’s data is based on Technorati’s lists Wednesday – Friday and Icerocket’s lists all five days.