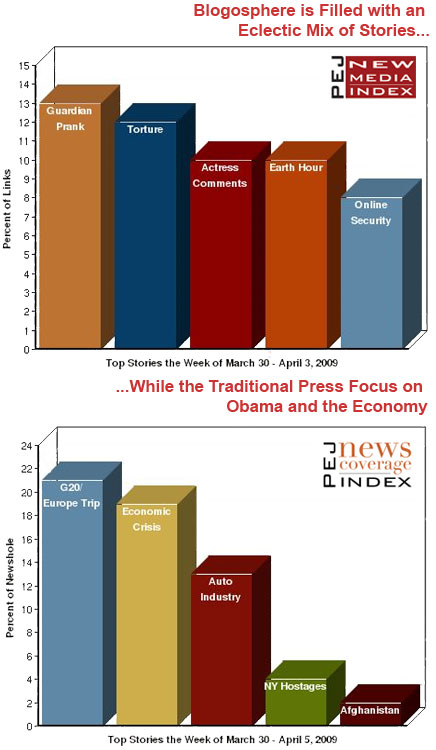 After two weeks when the economic crisis was the overwhelming focus of social media, bloggers, from March 30-April 3, spread their attention evenly over a more eclectic group of stories.

Indeed it was a week of stark contrast between the mainstream and social media agendas. The top three stories in the traditional media-the G-20 Summit, the economic crisis and the troubled U.S. auto industry-all related to the dominating U.S. recession. The three leading topics in the blogosphere-an April Fools’ joke about journalism, anti-terror interrogation techniques, and an actress who is no fan of Barack Obama-had nothing in common except an ability to spark online conversation.

The most discussed story last week wasn’t even real. An April Fools’ Day report on the Web site of the British paper, the Guardian, proclaimed it would scrap its print edition and use the popular online communication site Twitter. This story received 13% of the links by blogs and social media sites according to the New Media Index from the Pew Research Center’s Project for Excellence in Journalism.

While bloggers got the joke, it gained attention because some felt the phony Twitter story offered genuine insight into the huge economic and technological changes transforming the news business.  It also marked the third time since PEJ began the New Media Index in January that a practical joke was one of the top subjects. (The other two included a digitally altered road sign and a teenager who painted a graphic image on the roof of his home.)

The second-largest story, garnering nearly as much attention (12% of the links), questioned the effectiveness of torture as a technique for gaining intelligence information. Bloggers focused on a March 29 Washington Post report that the harsh interrogation techniques used on al-Qaeda suspect Abu Zubaida yielded no useful information and gave fodder to those who opposed the use of such methods by the United States.

The third most linked-to story of the week (at 10%) was a mix of Hollywood and politics. Actress Angie Harmon, in an interview with Fox News, said she was tired of having to defend herself against charges of racism because she opposed President Obama.

The fourth story (also at 10%) was a collection of pictures on Boston.com that showed buildings all over the world participating in Earth Hour 2009, an observance where people turn off lights to highlight issues of climate change.

Rounding out the top five subjects online (at 8%) were stories concerning cybersecurity, such as a March 28 New York Times report about a vast spy system that had already infiltrated computers in 103 countries.

None of the top online stories registered in the top-10 list for the traditional media last week according to PEJ’s News Coverage Index. Instead, Obama’s European trip, the U.S. financial meltdown, the ouster of GM boss Richard Wagoner, the killing spree that left 14 dead in Binghamton, New York and the war in Afghanistan drove that coverage.

These are some of the findings of the PEJ’s New Media Index for the week of March 30-April 3. The index is an effort to monitor the content appearing in new media platforms. The biggest element of this Index is what appears in the more than 100 million blogs and other social media web pages concerned with national news and public affairs tracked by two monitoring sites, Technorati and Icerocket. Both track the commentary online by identifying what news stories bloggers and other websites link to. Each weekday, PEJ captures the top linked-to stories and analyzes their content. It then compares those findings with the results of its weekly analysis of more mainstream media, the weekly News Coverage Index. The Project also tracks the most popular news videos on YouTube each week.

After 188 years of using ink, an April 1 Guardian article announced that the paper would now produce news via the popular Web site Twitter, which requires content to be delivered 140 characters at a time. As an example of how history might have been recorded by Twitter feeds, the Guardian offered this account of Charles Lindbergh’s famous 1927 flight: "OMG first successful transatlantic air flight wow, pretty cool! Boring day…otherwise *sigh*."

"The Guardian is one of my absolute favourite newspapers, and it has a little fun by embracing Twitter-or as it’s known here, ‘blogging for people with ADD,’" wrote Curtis Brown at Endless Spin Cycle.

But others highlighted the story because they felt there was something symbolic, or even predictive, behind the prank.

"It was of course an April Fool’s joke," explained Suzanne Robinson on her blog, "but I feel there were serious undertones…The joke article clearly shows that the Guardian recognises the impact that services such as Twitter, Facebook and citizen journalism are having on the newsgathering process. There is no doubt that the paper and other mainstream news organisations are already harnessing the "unprecedented newsgathering power" of non-traditional news outlets."*

"They jest, but given the lackluster quality of contemporary journalism, this is actually a pretty good idea," added a commenter named Aaron on the blog ubiwar.

Some played along with the ruse.

"In journalism news, the Seattle Post-Intelligencer gave up print … both of Chicago’s daily newspapers are bankrupt … Detroit’s newspapers only home-deliver three days a week. But none of them is as brave as the Guardian: Twitter switch for Guardian, after 188 years of ink …. Guardian FTW!!!" exclaimed Charlie Montney at A Songdog’s World of Random Thoughts.

Questions about a Terror Suspect

The Washington Post’s March 29 story entitled, "Detainee’s Harsh Treatment Foiled No Plots," reported that harsh interrogation techniques, such as waterboarding, used against al-Qaeda suspect Abu Zubaida in Guantanamo Bay provided no value for the intelligence community. The story fueled critics of Bush Administration policies on interrogation but also led some defenders to protest.

"So while BushCo steadfastly maintains that their policies made us safer, the evidence discloses it accomplished nothing of the sort and actually has only removed us from the moral high ground necessary to persuade hearts and minds," claimed Sisyphus on 43rd State Blues.

Blogger Dan Gillmor went one step further: "The Washington Post does an excellent story on torture during the Bush administration, but, in the cowardly way that the paper has done all along, refuses to use the word ‘torture’ forthrightly. It is not ‘harsh interrogation methods,’ as the Post insists on saying…It is torture. Period."

Others, though in the clear minority, disputed the claims.

"The Left’s assault on the CIA program continues with today’s front-page story about the interrogation of Abu Zubaydah: ‘Detainees Harsh Treatment Foiled No Plots,’ argued Marc Thiessen at the National Review. "The story, like so many on this program, is rife with errors and misinformation…The Left is desperate to discredit the efficacy of this program, and they have launched a desperate campaign to destroy it."

The Actress vs. The President

Some conservative bloggers responded to a Fox News interview with actress Angie Harmon, perhaps best known for her role as prosecutor Abbie Carmichael on Law & Order. Harmon discussed her opposition to Obama’s policies, said she was tired of defending herself against charges of racism because of her views and voiced admiration for former vice presidential candidate Sarah Palin.

"Support Angie Harmon," urged the Sarah Palin Blog. "She is smart, beautiful, talented and not afraid to stand up for her beliefs! Angie Harmon is an endangered species – A Republican in Hollywood."

"I am constantly telling people not to listen to celebrities because they’re all ignorant and should be entertaining us, but I’m going to make an exception," suggested Megan Fox at Webloggin before offering a bit of unsolicited career advice.

"Ang, be prepared for your name to get added to that big black list in Tinseltown. But take heart! Talk radio is always hiring hot conservative chicks who can articulate like you can."

The most viewed news video last week was a short clip from an interview with NBA star Lebron James that appeared on the March 29 edition of CBS’s 60 Minutes. James, talking with correspondent Steve Kroft while walking in his old high school gym, launches an improbable half-court shot. The ball swishes cleanly through the net before James declares, "I’m one take, baby, that’s all." Little wonder that the video was used in a CBS promotional ad for the show.

Once Again, Interrogation and Torture Drive the Online Debate