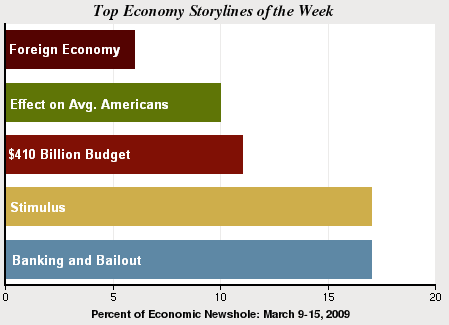 In a week highlighted by a rise in the stock market and a showdown between a comedian and cable host, the financial crisis was again the top story in the news—by a wide margin.

The economic meltdown, with its spreading storylines, accounted for 35% of the newshole from March 9-15, according to the Pew Research Center’s Project for Excellence in Journalism. Related stories, such as the Bernard Madoff scandal and problems in the auto industry, added another 8%, as measured by PEJ’s weekly News Coverage Index, an examination of 55 different mainstream news outlets across five media sectors.

Last week, the narrative seemed to focus more on what had been a smaller but ongoing element, the hunt for people or institutions that appear to embody the nearly unbridled excess that contributed to the unraveling of the financial system.

One earlier example was former Merrill Lynch CEO John Thain, who generated attention and scorn for spending more than $1 million to refurbish his office. Or troubled Citigroup, recipient of billions in bailout money, which made headlines with plans to buy a $50-million jet—before reversing course.

Last week, that spotlight moved back onto insurance giant and multiple-bailout recipient AIG, which was lampooned as a financial “black hole” by late night host Jay Leno. Over the weekend, AIG also made front-page news that provoked populist and political outrage after revelations the company would pay a reported $165 million in bonuses despite taking $170 billion in federal funds, and the storyline appeared to be spilling over into this week as week as well.

Another culprit also emerged during the week—the media itself, particularly the financial cable news channel CNBC. Jon Stewart, host of the Daily Show, had recently spent time fingering CNBC “Mad Money” host Jim Cramer, among others. Things culminated on March 12, when Stewart, channeling Mike Wallace, grilled Cramer and accused CNBC of abandoning journalism for cheerleading in the run-up to the Wall Street collapse. The encounter, complete with Stewart’s four-letter expletives, became an instant online video hit and made its way to the White House, where Obama press secretary Robert Gibbs told reporters he had “enjoyed it thoroughly.” By week’s end, the feud had become a major event in the mainstream press, page one material and a Twitter favorite.

Madoff, perhaps the single-most-visible villain in this run of economic bad news, also attracted substantial attention last week for pleading guilty to bilking investors in a $65 billion Ponzi scheme. By himself, Madoff was the No. 3 story of the week, filling 7% of the newshole.

As was the case the previous week, coverage of the economy last week was driven by a variety of related storylines, each receiving significant attention. The top component, at 17% of the economic newshole, was the credit crunch/financial sector bailout. That was followed very closely (also 17%) by coverage of the stimulus package, including some talk, which quickly abated, about the need for a second stimulus bill. The $410 billion measure funding the government—which contained numerous earmarks—accounted for another 11% of financial crisis coverage. That was followed by coverage of the recession’s impact on average Americans, at 10%.

The good-news-is-no-news theory also seemed to be validated last week when attention to the Dow Jones, which gained about 600 points, resulted in less coverage of the market. Rising stocks filled 6% of the economic narrative. The week before, when the Dow had plunged by almost 440 points, the storyline accounted for 16% of the coverage. 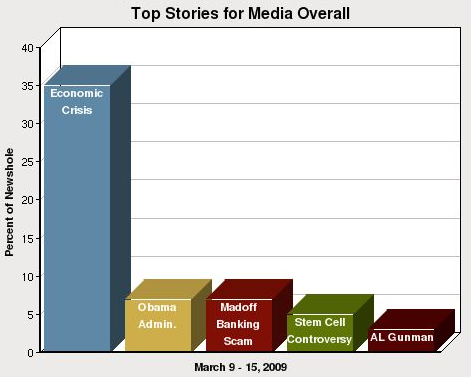 In its never ending search for causes, the media were quick to peg the beginning of the week’s gains on a ray of optimism from one bank in the beleaguered financial sector, Citigroup.

As a story in the March 11 San Jose Mercury News noted, and echoed elsewhere in the media, “A memorandum from the chief executive of Citigroup, Vikram S. Pandit, fueled early gains [in the stock market] after he said that the bank’s quarterly performance to date, before taxes and special items, was the best since the third quarter of 2007…investors took the memo as a sign of better days ahead for Citigroup, which had an $8.29 billion loss in the fourth quarter of 2008.”

The bad, and potentially infuriating, news from the financial sector broke at the end of the week. “Insurance giant American International Group will award hundreds of millions of dollars in employee bonuses and retention pay despite a confrontation Wednesday between the chief executive and Treasury Secretary Timothy F. Geithner,” reported the March 15 Washington Post. “The bonuses and other payments have been exasperating government officials, who have committed $170 billion to keep the company afloat—far more than has been offered to any other financial firm.”

That story immediately spawned speculation about a real flare-up of populist outrage and the growing pressure on the administration to challenge, legally if necessary, the AIG payouts.

One other story earlier in the week clearly had the Obama White House on the defensive, the $410 billion spending package to keep government operating that was loaded with thousands of earmarks.

“No photo op for this signing,” noted CBS anchor Katie Couric on the network’s March 11 newscast. Added correspondent Chip Reid: “The last thing the President wanted was a high-profile ceremony as he signed a bill stuffed with pork barrel spending”—including such items as $950,000 for a Myrtle Beach South Carolina convention center and $238,000 for a Polynesian Voyaging Society in Hawaii.

One of the more memorable media moments last week quickly became known as the “Stewart-Cramer smackdown.” If Cramer, the manic CNBC host thought his March 12 Daily Show appearance would mitigate Stewart’s ongoing criticism of the financial cable channel, it didn’t happen. At one point, Stewart, boring in relentlessly and mirthlessly, told Kramer “I understand you want to make finance entertaining, but it’s not a [expletive] game.”

The encounter attracted numerous press reviews. A March 13 Politico story sampled these reactions: “Variety proclaimed Thursday’s ‘Daily Show’ interview ‘the most foolish appearance by someone whose name sounded like ‘Cramer’ since ‘Seinfeld’ went off the air,’ while others called it ‘a beat-down’ (The Chicago Tribune); ‘a massacre’ (Huffington Post); and a ‘remarkable public service [in] gutting Cramer’ (The Baltimore Sun).”

Washington Post media critic Howard Kurtz wrote that, “The result was riveting, if not particularly hilarious, television, with Stewart dominating all the way…Stewart became "Crossfire Jon," the avenging media critic, demanding to know why CNBC failed so badly in warning us, the investing public, of the looming meltdown. He was mad and loaded for Bear Stearns.”

The Cramer interview was reminiscent of Stewart’s October 2004 appearance on CNN’s Crossfire when he criticized the argumentative, partisan nature of the show, telling co-hosts Tucker Carlson and Paul Begala to “stop hurting America.” (Crossfire was cancelled within months.) It also highlights Stewart’s unique niche in the media culture.

While Stewart has always resisted labeling his show as journalism, a 2008 PEJ study concluded that, “The Daily Show performs a function that is close to journalistic in nature—getting people to think critically about the public square. In that sense, it is a variation of the tradition of Russell Baker, Art Hoppe, Art Buchwald, H.L. Mencken and other satirists who once graced the pages of American newspapers.” 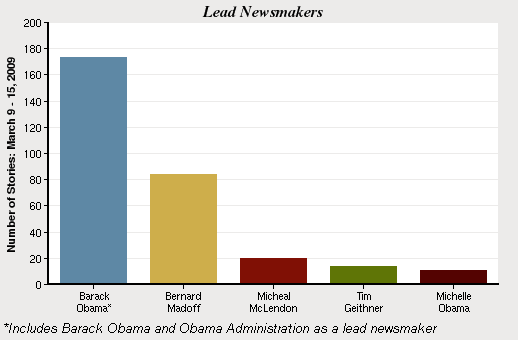 The one virtual certainty as long as the economic crisis dominates the news agenda is that the man elected to fix it—Barack Obama—will be the top newsmaker. Last week, he was the lead newsmaker in 13% of the stories (meaning he was featured in at least 50% of those stories), the same level as the previous week. But sometimes being closely tied to continuing bad news on the economic front has its own gravitational pull. A new poll by the Pew Research Center for the People & the Press found the President’s current job approval rating sliding to 59% from 64% last month while the disapproval numbers jumped to 26% from 17%.

The second leading newsmaker was Bernard Madoff, at 6%. From there the drop-off was notable.

The No. 3 newsmaker (at 2%) was Michael McLendon, the man who killed 10 people before turning the gun on himself in an Alabama rampage last week. No. 4 was Treasury Secretary Tim Geithner (1%). Tied at 1% were First Lady Michelle Obama, who made a visit to the military base at Fort Bragg, as well as Jim Cramer, who was on the receiving end of Stewart’s wrath.

After the economic crisis, the second-biggest story the week of March 9-15 was coverage of the new Obama Administration that did not involve the economy, at 7% of the newshole. The biggest component of that story was coverage of White House appointments, and in that area, the Charles Freeman episode was a substantial newsmaker. A controversial selection to chair the National Intelligence Council, Freeman withdrew under pressure last week and created a furor by blaming the “Israel Lobby” for distorting his record.

The No. 3 story, also at 7% was the Madoff case. The No. 4 story, at 5% of the newshole, was Obama’s decision to overturn Bush Administration policy by lifting restrictions on federal funding for embryonic stem cell research. The story played out largely as a culture war pitting advocates of science against cultural conservatives. In one sign of how politically divisive the issue was, the story got the most attention (11% of the newshole) in the radio sector, which includes the ideological radio talk hosts. That was followed (at 3%) by Michael McLendon’s March 10 killing spree through a swath of rural Alabama.