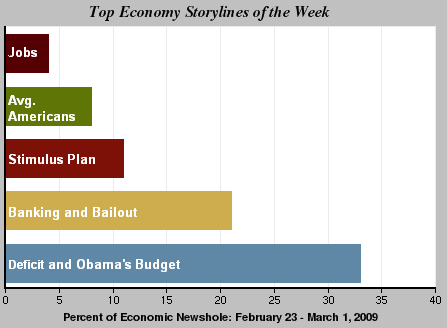 In a week chock full of major events designed to address the crisis—a fiscal responsibility summit, a prime-time presidential speech and the unveiling of Obama’s first budget—the increasingly frail state of the U.S. economy again dominated the headlines.

And amid the swirl of events, a media meta narrative was forming that was considerably greater than the sum of the news: After only five weeks in office, Obama was staking his presidency on a stunning and sweeping overhaul of domestic priorities.

Driven primarily by the Obama budget and concerns over the nation’s red ink, the economic crisis was easily the top story from February 23-March 1, according to the Pew Research Center’s Project for Excellence in Journalism. It filled 38% of the newshole, compared with 39 % the previous week. But that is only a partial indicator of the dominance of economic news last week.

The second biggest story (10% of newshole), was Obama’s Feb. 24 speech—delivered to Congress but aimed at living rooms—intended to strike a balance between reassurance and urgency about the country’s economic stability. Coverage of the failing U.S. auto industry accounted for another 2%. Some of the media’s attention to the mechanics of the new Administration last week also included an analysis of Obama’s ambitious efforts at domestic restructuring.

As events unfolded, the developing theme was the sheer breadth and scope of the change—certain to trigger major battles in Washington—that Obama was pushing in the early days of his tenure.

“The budget President Obama proposed on Thursday is nothing less than an attempt to end a three-decade era of economic policy dominated by the ideas of Ronald Reagan and his supporters,” declared a story in the New York Times.

A similar, if blunter, sentiment came from Atlantic Media blogger Andrew Sullivan who wrote that Obama had seized on the economic crisis as a “moment for more radicalism than might have seemed possible only a couple of months ago…If none of this works, he will have taken a massive gamble and failed. But if any of it works, if the economy recovers…then we’re talking less Reagan than FDR in long-term impact.”

“It’s going to be a riveting first year, isn’t it?” he added.

In a sign of how pervasive and diverse the economic problems are, for the third week in a row a different component of the financial crisis drove coverage of the economy. Three weeks ago, it was the debate over the $787 billion stimulus package. Two weeks ago, it was the housing and mortgage package unveiled by the administration. Last week, February 23-March 1, Obama’s budget proposal and the nation’s growing deficit combined as the top theme, accounting for one-third (33%) of the financial meltdown coverage. The next largest storyline was the continuing banking and credit crunch and the financial bailout program (21% of the economic newshole) followed by coverage of the still simmering debate over Obama’s stimulus plan, at 11%.

The week began with a White House event clearly intended to demonstrate the President’s concern about the red ink in light of massive federal spending—a February 23 fiscal responsibility summit.

“President Barack Obama is bringing together dozens of advisers and adversaries to discuss how to curb a burgeoning federal deficit laden with Social Security, Medicare and Medicaid obligations,” said an AP story posted on AOL news. “Obama’s summit at the White House on Monday is the first meeting toward a strategy to address the long-term fiscal health of the nation…Even before it began, some of its 130 invited participants cautioned against over inflated expectations.” 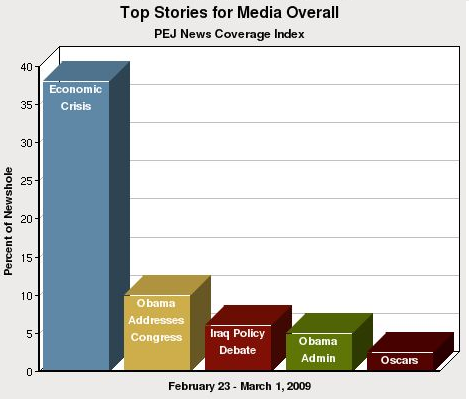 What came next was an economic man-bites-dog story, slices of the economy—or “pockets of optimism”—that were doing well in tough times. Among the examples were a shoe repair business in South Florida (because people aren’t buying new shoes) and a mechanic in San Antonio who opened an auto repair shop in his backyard.

Toward the end of the week, however, the Obama budget and its potential implications simply overwhelmed the rest of the narrative.

“In $3.6 Trillion Budget, Obama Signals Broad Shift in Priorities,” declared the banner headline atop the February 27 Washington Post. In an accompanying analysis, Dan Balz wrote that, “President Obama’s first budget—with its eye-popping $1.75 trillion deficit, a health-care fund of more than $600 billion, a $150 billion energy package and proposals to tax wealthy Americans even beyond what he talked about during his campaign—underscores the breadth of his aspiration to reverse three decades of conservative governance and use his presidency to rapidly transform the country.”

“Like Ronald Reagan for Republicans 28 years ago, the new Democratic president is staking out his party’s position on spending and taxes. Whereas Reagan sought to limit government, Obama wants to expand its reach,” added the February 27 USA Today story, while conjuring up the President’s favored campaign slogan.

“This is change, whether you believe in it or not.”

Among other things, circumstances prompted lots of historical comparisons, most frequently to Franklin Delano Roosevelt who took office in the midst of the Great Depression. And many of the commentators seemed to be gauging the speech for its psychological content, eager to see whether Obama could ladle out enough hope to go along with the castor oil of current economic reality.

On the February 25 edition of CBS’s Early Show, chief Washington correspondent Bob Schieffer cited snap polls showing a favorable reaction to the speech. (One CBS survey indicated the percentage of those who approved the President’s economic plans jumped to 80% after the speech compared with 63% before.)

“I thought it was a very effective speech,” said Schieffer. “He tried to explain some of the bitter medicine that he says is going to be needed to get the economy going again.” Then Schieffer returned to that key theme in the week’s media narrative, declaring that Obama is “staking his presidency on this enormous program.”

A more critical assessment came in William Kristol’s column. “Obama’s speech reminds of Ronald Reagan’s in 1981 in its intention to reshape the American political landscape. But of course Obama wishes to undo the Reagan agenda,” he wrote. Republicans “can’t allow Obama to make of 2009 what Franklin Roosevelt made of 1933 or Johnson of 1965.” 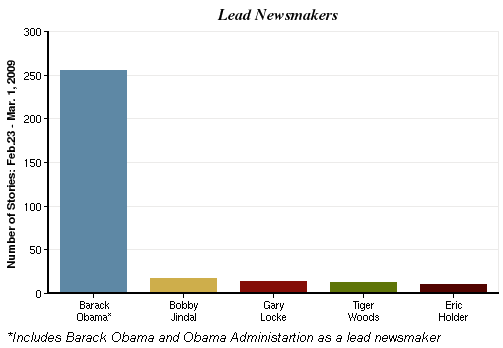 All this meant that Obama was an even bigger story last week than he had been. From Feb. 23-March 1, the President was a lead newsmaker—meaning he was featured in at least 50% of a story—in 20% of the week’s stories, his highest level of coverage since inauguration week.

No one else came remotely close to matching the President’s coverage and his closest competitor suffered by comparison—on several fronts. Louisiana Governor Bobby Jindal, touted as a rising young Republican star, was given the largely thankless task of responding to Obama’s February 24 speech, and he turned in what the media considered a shaky performance, panned by liberals and conservatives alike. For that, he was the No. 2 newsmaker of the week, but only at 1% of the stories.

At No. 3 (also at 1%) was Gary Locke, the former Washington governor and the newest candidate in Obama’s third attempt at picking a Commerce Secretary. After that came a man who had a mixed week. The good news for Tiger Woods (1%) was that he returned to professional golf competition after an eight-month absence due to knee surgery. The bad news was the he was upset in the second round of the Accenture Match Play tournament by South Africa native Tim Clark who had yet to win on the PGA Tour. The fifth newsmaker on the list, also at 1%, was Attorney General Eric Holder.

Almost lost amid the tsunami of economic news was, oh, the end of the war in Iraq. After the economic crisis and the President’s speech accounted for almost 50% of the week’s newshole, the No. 3 story from February 23-March 1 involved a major foreign policy decision that formally ended the political debate over the war.

The news that Obama planned to withdraw U.S. combat troops from Iraq by August 2010, leaving behind a residual force of about 50,000, filled 6% of the newshole. While that represented twice as much coverage as Obama’s decision to send an additional 17,000 troops to Afghanistan the previous week, that modest level of attention is a reflection of how much has changed in a year. At one point, Iraq looked to be the burning issue in the 2008 presidential race and Obama used it to differentiate himself from Hillary Clinton in their long primary battle. But early in 2008, months before the dimensions of the meltdown became known, it was clear that economic worries had surpassed the war as the most important issue for voters.

Even more stunning, in its own way, was the almost unanimous acceptance of the policy change, praised by officials from George Bush’s cabinet and John McCain’s camp. The only discordant note seemed to come from the left of Obama’s own party, who grumbled about the number of troops that would remain.

The fourth-biggest story of the week, at 5%, was coverage of the mechanics of the new Obama administration, where the President’s appointments, most notably Gary Locke, dominated the narrative. The No. 5 story at 2% was coverage of the Academy Awards where the big news was the film Slumdog Millionaire, which walked away with eight statues. Some conservative talk hosts, including Rush Limbaugh and Michael Savage, also had something to say the liberal proclivities of Hollywood and Sean Penn, an outspoken activist who won an Oscar for his portrayal of openly gay San Francisco Supervisor Harvey Milk.