Whatever difficulties Barack Obama has faced in controlling the tone of his coverage as President, he has surely dictated the subject matter. Obama made the economic crisis his top priority, and in his first weeks in office, coverage of the meltdown has overwhelmed the news agenda.

The President may not control the message, but he still controls the agenda.

The week of Feb 9-15, the financial crisis filled 47% of the newshole as measured by the Pew Research Center’s Project for Excellence in Journalism. That is the highest level of attention to any story since the final week of the presidential campaign consumed 54% of the time on TV and radio and space in print and online from Oct. 27-Nov. 2.

To put that into further perspective, in the first two months of 2008—which included key contests in Iowa, New Hampshire and South Carolina as well as Super Tuesday—the campaign accounted for 44% of all coverage studied. In the three full weeks since Obama’s inauguration, the economic crisis has accounted for 46%.

Last week, which ended with a stimulus bill on the President’s desk, also brought some change to the tone of coverage. A week earlier, with the stimulus bogged down in partisan rancor and Health and Human Services nominee Tom Daschle withdrawing from Cabinet consideration, media commentary reinforced the theme of Obama’s rocky start.

But the narrative was kinder to the President last week, with the stimulus approved (albeit with only three GOP votes) and polls showing Obama still enjoying high public approval ratings. On the media scorecard, apparently, a big legislative victory—even an imperfect one—goes into the win column.

And the most recent Cabinet glitch—Republican Judd Gregg’s withdrawal last week from Commerce Secretary consideration—didn’t have the same resonance as some previous ones. Coverage of the mechanics of the new administration—which included the Gregg episode—was at only 6% of the newshole. A week earlier, with the Daschle debacle as chief storyline, administration coverage filled nearly three times as much newshole (17%).

With the political struggle over the stimulus over, at least for now, one question is whether the news agenda will begin to broaden. Washington fights make it easy for the press to converge, cover and commentate. But as the Obama agenda now fans out to deal with everything from Afghanistan to Detroit, to what extent will the media follow?

The Economic Crisis: What a Difference a Week Makes

The arc of the economic storyline last week was sweeping and dramatic. It began with Obama taking his case for the stimulus directly to the public with a highly visible road trip and a prime time Feb. 9 press conference. The next day, his Treasury Secretary unveiled the outlines of his eagerly awaited—and widely panned—financial sector bailout plan, also known as TARP II. The stimulus package then wended its way through Capitol Hill, culminating in a Feb. 13 Senate vote that sent the measure to the President with the needed 60 votes, and not one to spare.

After the previous week’s coverage depicted a reactive Obama losing control of the stimulus spin wars, his aggressive pitch last week generated a narrative about a more proactive President putting his personal popularity behind the measure.

“The [Obama] news conference was the centerpiece of an intense and highly orchestrated campaign by the administration to wrest control of the stimulus debate from Republicans and reframe it on Mr. Obama’s terms,” said a Feb. 10 New York Times story.

One moment that was perhaps telling occurred Feb. 10 on MSNBC when morning host Joe Scarborough, a vocal critic of Obama’s handling of the stimulus, offered a mea culpa of sorts after a Gallup Poll showed that 67% approved of the President’s handling of the issue while only 31% liked what the Republicans were doing. “Perhaps we’ve overanalyzed it and we don’t know what we’re talking about,” Scarborough allowed.

The sourest note in coverage for the new Administration last week came after Tim Geithner’s Feb. 10 presentation generated considerable criticism—most notably for its lack of detail—and was largely blamed for a 382-point drop in the Dow that day.

“Geithner Plan Lacks Freshness And Clarity” declared the headline on an analysis posted Feb. 11 on the Washington Post web site. “Many of the specific policies Geithner offered were tweaks, adjustments or continuations of [former Treasury Secretary Henry] Paulson’s strategy,” the piece asserted. “And the more novel elements…came with so few details about how they would work that it contributed to the very public anxiety and investor uncertainty that Geithner criticized.”

To what extent did the press try to break down the $790 billion stimulus bill, the largest in American history? The tax cuts alone were the largest on record.

Certainly some stories tried to look inside the plan. A Feb. 12 NBC report from correspondent Kelly O’Donnell examined what the stimulus “could mean around your kitchen table,” sifting through tax breaks and rebates for couples and senior citizens, additional unemployment protection and a tax credit for first time homebuyers. The story only touched on a small portion of the stimulus, but may have had the effect of helping sell the measure by identifying benefits for a fairly wide cross-section of the public.

The partisan commentary on the stimulus fight last week was pretty predictable. Writing in the Weekly Standard, William Kristol asserted that, “Politically, Republicans are relieved by Obama’s weak start…Obama allowed the GOP to…begin the term with a reinvigorating series of intellectually successful assaults on the stimulus bill.” Conversely, the New York Times’ Frank Rich declared that, “Just as in the presidential campaign, Obama has once again outwitted the punditocracy and the opposition.”

A considerably more neutral observer, the Washington Post’s David Broder, may have accurately summed up last week’s media message when he described the stimulus battle as a victory, if no cakewalk, for the new President. “Despite…difficulties and distractions, Obama was able to conduct an inside-outside offensive for his first big bill, the stimulus plan designed to stop the scary slide in the economy,” Broder wrote. “He carried his campaign from Capitol Hill to Indiana, Florida and Illinois, reaching out to Republicans as well as Democrats.”

Judd Gregg is no Tom Daschle

Coverage of the mechanics of the new Obama Administration, which has recently focused on Obama appointments, accounted for only 6% of the newshole last week—a plunge from 17% the previous week. One reason for that drop has to do with the differences in how the media treated two recent Cabinet snags.

Two weeks ago, much of the coverage was about Tom Daschle’s withdrawal as Health and Human Services Secretary designee after he was tripped up by tax problems. The storyline reflected negatively on Obama and a troubled vetting process in which numerous appointments have run afoul of the Internal Revenue Service.

Last week, much of the considerably smaller coverage of administration logistics was about GOP Senator Judd Gregg’s withdrawal as Commerce Secretary designee after concluding he had too many differences with Obama. In that case, however, the media fallout fell more evenly. Gregg’s decision was conveyed as another speed bump for the Obama team. But the New Hampshire Senator’s change of heart generated some tough scrutiny as well. One reason may have been that Gregg changed his mind rather than seeming to be a case of poor vetting.

On his Feb. 12 CNN show, Anderson Cooper wondered if the Gregg’s “about face” was a “sign Republicans have no desire for real bipartisanship. Have they in fact declared war on President Obama?”

So in a week in which the tone of Obama-centric coverage improved in general, he seemed considerably less damaged by the Gregg withdrawal than by the Daschle exit. 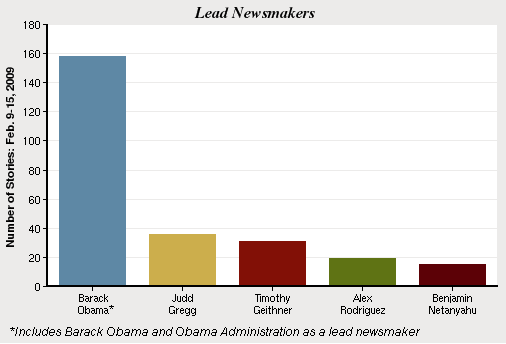 As the focal point in the stimulus debate from Feb. 9-15, President Obama was the lead newsmaker (meaning he was the focus of at least half the story) in 12% of the week’s stories, a moderate drop from 16% in the previous two weeks. The No. 2 newsmaker, at 3%, was Judd Gregg, followed by Treasury Secretary Tim Geithner at 2%. The No. 5 newsmaker on the list was Benjamin Netanyahu, (1%) the man considered most likely to eventually lead the next Israeli Government in the wake of the Feb. 10 elections there.

One interesting addition to the list was the No. 4 newsmaker, Yankees third baseman Alex Rodriquez, at 2%, who was dealing with fallout from the Sports Illustrated story revealing he had tested positive for steroids in 2003.

After the financial crisis filled nearly half of all the airtime on TV and radio and space in print and online studied, the drop-off from the top story to the rest of the news agenda was dramatic last week. The No. 2 story, the new Obama Administration, accounted for 6% of the newshole. That was followed (at 5%) by the Feb. 12 crash of a commuter plane near Buffalo that killed 50 people, a story that generated the most coverage—11% of the airtime—on the network news programs.

The No. 4 story, at 2%, was the voting in Israel, a mixed verdict that left the composition of a new government unresolved for the time being. Notably, coverage of the election—which could have a major impact on U.S. foreign policy—received only a fraction of the attention given to the recent fighting in Gaza (21% of the newshole the week of Dec. 29-Jan. 4). Rounding out the top-five story list, also at 2%, was the outbreak of destructive Australian wildfires that have killed at least 200 people.

Symbols and Substance of Obama’s First Week Drive the Narrative