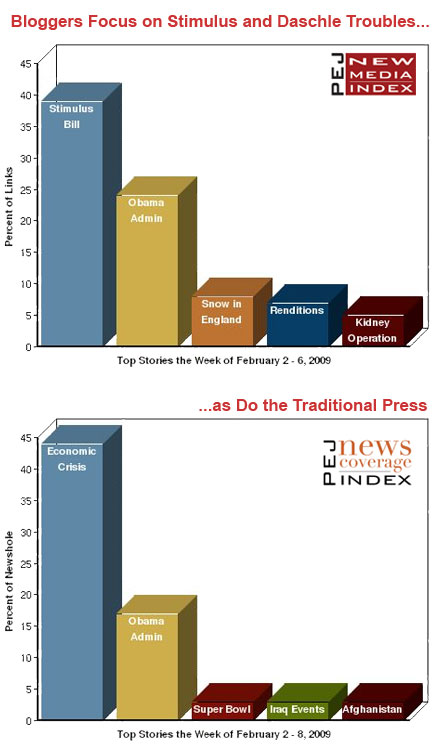 Blogs and social media largely agreed with the more traditional press about the two dominant topics in last week’s news – President Barack Obama’s economic stimulus package and the taxing problems with some of his Cabinet nominees. But the new media turned next to an event outside the U.S., which, if somewhat less weighty, demonstrated the more global reach of Internet news.

Bloggers, talk show hosts and other media pundits all saw high stakes in the battle over the stimulus bill. But the new media, rather than grading the political maneuverings of the new President, focused more on the economic value of elements in the plan itself. As for the Cabinet problems, bloggers overwhelmingly focused on Tom Daschle’s withdrawal as nominee for Secretary of Health and Human Services after he was tripped up by tax problems. Together these stories accounted for 63% of the linked-to stories last week.

Beyond the two Washington stories, the agenda of new media users differed noticeably from traditional media.

The third story (at 8% of the links) in new media was the largest snowstorm to pummel Southeast England in 18 years. The fourth (7%) revolved around a Los Angeles Times report that Obama had preserved the controversial tactic of rendition used in investigating alleged terrorists. The fifth story (5%) dealt with a questionable method, used at Johns Hopkins Medical Center to remove a donor’s kidney.

These three stories received hardly any attention in the traditional American press last week, which focused on the Super Bowl and the wars in Iraq and Afghanistan as the third, fourth and fifth-biggest stories.

These are some of the findings of the third edition of a new feature by the Pew Research Center’s Project for Excellence in Journalism.

The New Media Index is an effort by PEJ to monitor the content appearing in new media platforms. The biggest element of this Index is what appears in the more than 100 million blogs and other social media web pages concerned with national news and public affairs tracked by two monitoring sites, Technorati and Icerocket. Both track the commentary online by identifying what news stories bloggers and other websites link to. Each weekday, PEJ captures the top linked-to stories and analyzes their content. It then compares those findings with the results of its weekly analysis of more mainstream media, the weekly News Coverage Index. The Project also tracks the most popular news videos on YouTube each week.

From Feb. 2-6, more than a third of the embedded links on blogs and social media (39%) focused on the stimulus bill debate. The second-largest story, with almost a quarter of embedded links, (24%) was about Obama’s problematic Cabinet nominations.

These two stories dominated the traditional press last week to similar degrees. There, the economic crisis, according to PEJ’s News Coverage Index, made up 44% of the overall newshole and Obama’s Administration 17%. The focus of the discussion, though, was often quite different with many pundits in the traditional press debating political impact and new media types advocating for or against the package.

PEJ is launching the New Media Index as a companion to its weekly News Coverage Index. Blogs and other new media are an important part of creating today’s news information narrative and in shaping the way Americans interact with the news. The expansion of online blogs and other social media sites has allowed news consumers and others outside the mainstream press to have more of a role in agenda setting, dissemination and interpretation. PEJ aims to find out what subjects in the national news the online sites focus on, and how that compared with the narrative in the traditional press.

Some of the bloggers’ discussion about the economy was ignited by a list, which appeared on CNN.com, of programs in the stimulus package that Republicans considered wasteful.

The online community, including thoughts from a former Speaker of the House, dissected the list in detail.

Conservatives found the programs on the list outrageous. "This ‘Stimulus’ Bill is a joke," wrote East Coast Mark. "Take a look at some of the absolute garbage the Democrats are filling this bill with."

"Among many other wasteful, non-stimulative projects," wrote former Speaker of the House Newt Gingrich on a post that appeared on the blog 7.62mm Justice, "it includes $650 million for digital TV coupons, $1 billion for climate satellite and habitat restoration programs, and $600 million to replace a portion of the federal government vehicle fleet."

Supporters of the bill saw the projects much differently. "Everything on the Republican list of ‘wasteful projects’ is stimulative," argued Gregg Carlstrom on Fedline. "$88 million for a new Coast Guard icebreaker? Someone is getting paid to build the ship. $248 million for new furniture at DHS headquarters? Someone has to build the furniture."

Some liberals argued that the GOP’s collection of complaints was not enough to defeat the main purpose of the bill. The Left Anchor declared, "All told, this ‘wasteful spending,’ a debatable term with many of these provisions, amount to just about $19 billion or just over 2% of the $900 billion Senate proposal. Or to put it simply, even by the Republicans own admission, the overwhelming bulk of this bill is acceptable as it is."

Republicans felt otherwise. "I have not heard of a single person who says ‘tax cuts alone’ are the solution," wrote Little Green Footballs. "This is the same kind of empty, false rhetoric he employed in his campaign-attacking stances that no one has espoused, and no one even would espouse."

The next biggest story of the week-the tax problems of Daschle-did not generate such party line divisions inside the new media. Instead, the President seemed to take criticism from all sides, often with links to a New York Times editorial calling for Daschle to step aside.

"There’s little doubt that Daschle had to go," wrote Michael Tomasky on his blog for the British Guardian. "Obama ran on the idea of changing the way things work in Washington. The Daschle story was Exhibit A (or possibly Exhibit B if you count Tim Geithner) in the prosecution’s case-the Republicans’ case-that all that change talk was smoke and mirrors."

"It’s funny how these Democrats are happy to spend other taxpayers’ money on social programs, but not so eager to actually pay taxes themselves," espoused Half Sigma.

Even the editor of the staunchly liberal Nation magazine Katrina Vanden Heuvel applauded Daschle’s decision to withdraw. She did, though, also see some positive return: "President Obama would be wise to use this as a ‘teachable moment’-one in which a new era of responsibility tackles the legalized corruption of lobbying in DC."

For the third-biggest story both the story cited and many of the posts came from the U.K.[1] Linking to various BBC reports, the biggest snowstorm to hit Southeast England spurred both awe and ridicule inside social media.

Comments from U.S. residents tended to ridicule how paralyzed Britain became. "I’m very amused by the widespread panic caused by the snow in London, and the COMPREHENSIVE BBC COVERAGE of same (tabbed features usually reserved for US elections and Darfur)," wrote polyphila. "Over here we are a little more used to it . . . the worst my (overground) train has been is 5 minutes late." (Apparently she doesn’t live in D.C.)

Some U.K.-based bloggers also felt the country overreacted, while others posted about the beauty of the rare snowfall.

The top two videos this week were both bizarre if entertaining clips, noticed by some and then quickly passed along to many, demonstrating the unpredictable viral nature of the web.

The top video of actor Ashton Kutcher ranting about a neighbor’s early morning construction work includes profanity that PEJ chooses not to post on this site. The second video reinforces the importance of teamwork -especially if two of you, handcuffed together, are trying to escape from prison.

PEJ is launching the New Media Index as a companion to its weekly News Coverage Index. Blogs and other new media are an important part of creating today’s news information narrative and in shaping the way Americans interact with the news. The expansion of online blogs and other social media sites has allowed news-consumers and others outside the mainstream press to have more of a role in agenda setting, dissemination and interpretation. PEJ wanted to find out what subjects in the national news the online sites focus on, and how that compared with the narrative in the traditional press.

Two prominent Web tracking sites, Technorati and Icerocket, monitor more than 100 million blogs and over 250 million pieces of social media, using the links to articles embedded on these sites as a proxy for determining what these subjects are. Using this tracking process as a base, PEJ staff compiles the lists of links weekday each day. They capture the top five linked-to stories on each list (50 stories in all each week), and reads, watches or listens to these posts and conducts a content analysis of their subject matter, just as it does for the mainstream press in its weekly News Coverage Index. It follows the same coding methodology as that of the NCI. This process allows us to compare the New Media commentary, based on the Technorati and Icerocket list of links, with the commentary in the traditional press.

While the News Coverage Index is comprised of primarily U.S.-based media outlets, the aggregators of blogs and other social media include both U.S. and non-U.S. blogs. In addition, stories that are linked to can be from non-U.S. sources. However, according to PEJ’s research over the last two months, the only non-U.S. news stories included in the top lists for Technorati and Icerocket have been the BBC (whose Web site is part of the News Coverage Index) and the Guardian.

*For the sake of authenticity, PEJ has a policy of not correcting misspellings that appear in direct quotes from blog postings.

[1] The links to coverage of the British snow fall came primarily from blogs listed on Icerocket. Many of these blogs originate from outside of the U.S., although the exact mix is not clear.

For Bloggers it’s the Two E’s — Election and Economy

Beyond Stimulus, Bloggers Focus on Pupils, Penance and Puppets