For the second week in a row the economic crisis was the dominant story in the news, filling 44% of the Feb. 2- Feb. 8 newshole in the weekly News Coverage Index produced by the Pew Research Center’s Project for Excellence in Journalism.

The only other subject to generate significant attention was a related one, the new Obama Administration at 17% (up from 7% a week earlier).

But both stories contained themes depicted as negative for Obama—problems winning Republican votes on the stimulus package and no fewer than four Presidential nominees tainted by tax problems.

The President seemed to fuel rather than dispel the storyline by admitting “I screwed up” during a round of TV interviews. Obama “has all but lost control of the agenda in Washington at a time when he simply can’t afford to do so,” wrote Newsweek’s Michael Hirsh. MSNBC host Joe Scarborough went further, wondering if Obama was off to one of the roughest debuts in recent presidential history.

If the storyline seemed to pivot dramatically from a heady inauguration to a rocky transition, that sense was significantly magnified by the two platforms offering instant updates of the Beltway scoreboard, and both of them now firmly ideological. On cable news, a dominant theme among talking heads was Obama stumbling at the starting gate. On talk radio, conservative hosts grew even more aggressive in staking out their opposition to the new President.

Obama Gets Thumped on the Talk Shows

During his brief tenure in office, Obama has expressed a clear distaste for elements of the talk show culture. The New York Post reported that he told a group of House Republicans that, “You can’t just listen to Rush Limbaugh and get things done.” In a speech on the stimulus plan, Obama pointedly declared that the American people did not “send us here to get bogged down” in the “same talking points, the same cable chatter.”

Such talk is not likely to silence Obama’s intended targets. The media talk culture that dominates cable news in prime time and news/talk stations on radio tends to amplify the one or two top subjects in the news, and last week was no exception. The general media measured by PEJ’s News Coverage Index devoted about three-fifths of their coverage to the economy and the new Administration. But the talk show conversation was even more focused on those two subjects.

The prime time cable talk programs studied—Campbell Brown and Lou Dobbs on CNN, Sean Hannity and Bill O’Reilly on Fox, and MSNBC’s Chris Matthews, Keith Olbermann, Rachel Maddow and David Shuster—devoted 81% of time studied to them—62% on the economic crisis and another 19% to the Obama Administration last week.

The radio hosts—conservatives Rush Limbaugh, Sean Hannity and Michael Savage and liberals Ed Schultz and Randi Rhodes—divided their energies more evenly among the Obama-centric topics. They spent 43% of their airtime on the financial crisis and another 30% on the early days of the Obama team.

On talk radio, conservatives—perhaps looking to reprise 1993 when right-leaning hosts battered new President Bill Clinton—were setting themselves up as the vanguard of Obama opposition.

“Here we are, the conservative underground, conservatism in exile,” declared Sean Hannity on his Feb. 4 radio show, before taking on the stimulus. “This socialism bill is like a rotting corpse,” he declared, “and public support has already dropped from below fifty percent.”

Limbaugh fill-in Mark Steyn also took comfort from poll numbers. “President Obama’s approval ratings have tumbled, tumbled to sixty-six percent according to Gallup, fifty-five percent in another poll,” he declared. “A couple more weeks like this…he could be down there in the George W. Bush basement of approval ratings.”

Even among friendlier talkers, the new President was having a tough week. “If someone had told me…that the first twenty days of the Obama administration were going to be plagued by all kinds of problems when it comes to who’s gonna be in the Cabinet, I would have said ‘no way,’” declared liberal Ed Schulz the day Tom Daschle withdrew as Obama’s Health and Human Services Secretary. “This has really been a curveball to me as a talk show host.”

On prime time cable, some conservative voices attacked the stimulus package as laden with pork. On his Feb. 5 Fox News Channel program, O’Reilly blasted Obama for allowing “Nancy Pelosi and her far left crew to hijack” the measure. “The majority of Americans are now opposed to spending a trillion dollars on social engineering and other liberal causes,” he added.

A few nights earlier on Hannity’s Fox program, ex-Congressman John Kasich had a basic and chilling warning about the stimulus: “This is a disaster for families and for children.”

The message of a beleaguered Obama may have been pounded home most vociferously by ideological voices, but last week, it clearly became the dominant view of analysts of all stripes. Appearing on Shuster’s MSNBC show, Ron Brownstein of Atlantic Media described the widespread perception that “the administration has lost control of the definition of what this [stimulus] bill is…They have had a tough time with the debate.”

The topic on Campbell Brown’s Feb. 3 CNN show was the damage from the Daschle withdrawal. “Big mea culpa from President Obama today just as his new administration is starting to look a little bit like politics as usual,” said Brown. “To have this kind of flop just two weeks in is very damaging,” added the Washington Post’s Dana Milbank.

Obama even found himself getting tweaked, albeit in a more light-hearted fashion, from a major liberal cable voice. During her opening monologue on Feb. 3, MSNBC’s Maddow made the case that the President erred by trying to reach out to Republicans, who were overwhelmingly unconvinced, for help on the stimulus.

“President Obama may need some relationship advice,” Maddow ventured. “In short, President Obama appears to be stuck on somebody who does not feel the same way about him…He keeps giving. They keep taking.”

In many corners of the talk universe last week, there was a torrent of discouraging words about the new President. 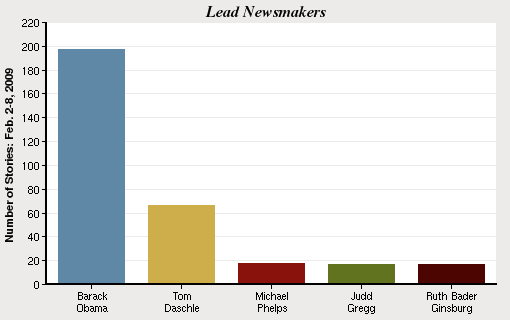 With Obama at the center of the stimulus debate and the Daschle flap, he was the top newsmaker again last week. In all, he was the lead newsmaker (meaning he was the focus of at least half the story) in 16% of the roughly 1,300 stories measured in the weekly NCI—the same percentage as last week.

The positioning of two of the top five newsmakers also says something about the kind of coverage the President generated last week. Daschle, the HHS selection who dropped out after embarrassing revelations of delinquent taxes, was the second-leading newsmaker (5% of the stories). Judd Gregg, the Republican Senator from New Hampshire tapped by Obama to become Commerce Secretary, was well behind, at 1%. In another week, Obama’s nod toward bi-partisanship in selecting Gregg might have been a bigger story. Last week, it took a back seat to the Daschle debacle. Supreme Court Justice Ruth Bader Ginsburg, who was revealed to be battling cancer last week, was tied with Gregg at 1%

One public figure having a bad news week was just ahead of Gregg and Ginsburg, also at 1%. Olympic swimming phenom Michael Phelps was on the list thanks to the fallout from his highly publicized pot smoking episode.

The drop-off in coverage after the two dominant stories last week was precipitous. The No. 3 story from Feb. 2-8, as measured by PEJ’s News Coverage Index, was coverage of Super Bowl XLIII, a thriller won by the Pittsburgh Steelers over the Arizona Cardinals 27-23, on a last minute touchdown. It filled only 2% of the newshole.

The two next biggest stories involved the two wars the U.S. is actively engaged in. The news from Iraq was fairly upbeat. Key elections went off peacefully and produced results favorable to U.S. policymakers. But in clear signal of how far Iraq has fallen on the media’s to-do list, the situation inside that country, including a crucial election, only accounted for 2% of the newshole last week. In many ways, the U.S. media and public seem to have moved on from the story.

The story from Afghanistan was grimmer, where news of militants disrupting an important U.S. supply route into the country helped fill 2% of the newshole.