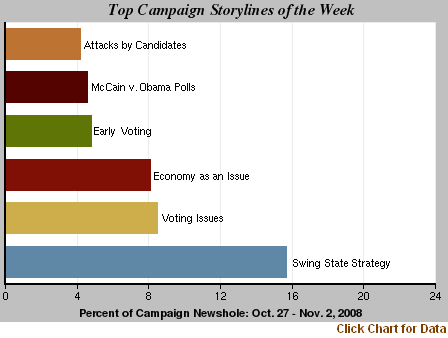 Nov. 2 was dominated by a multi-colored graphic located below the headline, “McCain’s Challenge: An Uphill Climb to 270.” The chart—which calculated electoral map math—grouped states that were “solid” for Obama and McCain, states that were “leaning” toward either one and states that were “up for grabs.” The verdict: If Obama simply carries the states in which he is favored, he would end up with 291 electoral votes, 21 more than needed for victory.

It was only one of many such maps in the last week. If there ever is a time when campaigns are horse races, it is in the final days, and coverage was indeed largely about the contest itself. In the week from Oct. 27-Nov. 2, the top storyline in the media, was coverage of the contest for crucial battleground states, filling 16% of the campaign newshole studied, according to the Campaign Coverage Index from the Pew Research Center’s Project for Excellence in Journalism. The battle over swing states was also No.1 the previous week, but at a smaller 10% of the coverage.

Yet the fight over Missouri, Ohio, and Florida is just the tip of the iceberg. When you add other strategic narratives—most notably, head-to-head polls (at 5%), candidate attacks (4%), ads, including Obama’s 30-minute “infomercial,” (3%) and electoral vote arithmetic (3%), attention to the horse race accounted for about one-third of last week’s campaign coverage. That’s up modestly over the previous week’s horse race coverage and a significant jump from that of the week of Oct. 13-19. And while the media were ever vigilant for signs of a tightening race, the overarching narrative was that Obama was the clear, and possibly even overwhelming, favorite to win.

One story not specifically in the strategy and tactics category was nonetheless widely interpreted as another sign of political problems for the GOP ticket. Criticism of and dissension within the McCain campaign, including stories that featured an anonymous McCain advisor calling Sarah Palin a “diva,” accounted for another 2% of the campaign newshole.

An additional 13% of the last week’s coverage was related to the process of voting. Most of that narrative was made up of stories highlighting concerns about potential problems in the voting booth, ranging from long voting lines in Florida to the status of homeless voters in Ohio. That theme accounted for 8% of the newshole and was the No. 2 campaign storyline of the week. Reports about early voting, reportedly quite heavy in many states, filled another 5%.

Thus, the horse race, voting issues, and dissension among Republicans combined to make up about half of the campaign newshole last week.

The candidates’ stands on crucial policy issues played a smaller but still significant role in the final week, accounting for 14% of the campaign newshole—down from 17% the previous week. And much of this centered on McCain’s closing argument against Obama’s economic priorities. The top issue by far was the general economy (8%) with health care well behind at 2% and the response to the fiscal crisis, so large a few weeks ago, also at 2%. And those numbers tell an interesting story. 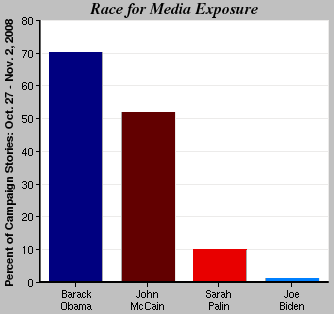 As the calendar has moved closer to Nov. 4 and further away from the shock of the mid-September Wall Street implosion, the candidates have reverted to traditional economic messages, talking more about general economic policy and less about the specifics of the immediate crisis. For the last two weeks, coverage of the candidates’ broad economic differences has outstripped news of their responses to the economic crisis by about 4-1, with McCain hitting Obama on wealth redistribution and Obama linking McCain to the economic policies of the Bush Administration.

When it comes to quantity of coverage, Obama appears to have regained his once substantial edge over McCain. From Oct. 27-Nov. 2, Obama was a significant or dominant factor in 70% of the campaign stories compared with 52% for McCain. That’s the second week in a row in which Obama has enjoyed a solid lead in coverage after a five-week period when McCain had grabbed an equal share of the headlines. For a while, a popular idea among pundits was that this campaign was largely about Obama. In recent weeks, it may be more accurate to say that that campaign coverage about Obama’s lead in the polls.

Overall, the presidential campaign filled 54% of the newshole as measured by PEJ’s News Coverage Index from Oct. 27-Nov. 2. That represents a slight uptick from the previous two weeks when the election was at 52% (Oct. 20-26) and 51% (Oct. 13-19). The race for the White House was the dominant story in all five media sectors, most notably in cable, where it accounted for 84% of the airtime studied, and on the radio airwaves, at 65%. Election coverage last week surpassed that of the economic crisis by about a 4-1 margin.

The coverage also contradicted the old adage that candidates try to convey a positive message in the closing days of a campaign. Last week saw both rivals hammering away at familiar themes and each other on the single most important issue in voters’ minds—the economy. 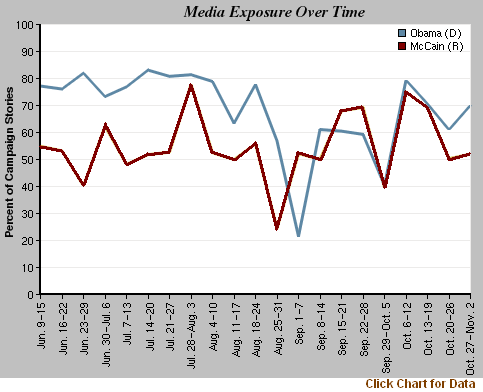 Dueling reports on Anderson Cooper’s Oct. 28 CNN program illustrated this. A piece about an Obama rally in Virginia showed the Democrat declaring that “John McCain’s ridden shotgun as George Bush has driven our economy towards a cliff.” Next came footage of McCain telling a Pennsylvania crowd that his opponent “favors higher taxes…Senator Obama is running to be the redistributionist in chief.”

If McCain was gaining traction with that message, it wasn’t evident in much of the horse race coverage during the week. An Oct. 31 Bloomberg News story posted on Google News laid out a tough prognosis for the Republican’s team.

McCain “goes into the campaign’s final weekend a bigger underdog than any victorious candidate in a modern election,” the story stated. “National polls show [Obama] leading by an average of 6 percentage points, and battleground polls show Obama ahead in more than enough states to win the decisive 270 Electoral College votes.” It then quoted political analyst Larry Sabato declaring, “This election is cooked and done, it’s in the warming tray.”

The Nov. 2 front-page Washington Post story was only slightly more equivocal. Citing a Post-ABC News tracking poll that had Obama up by nine points, the story said that McCain “faces an enormous task in trying to prevent Barack Obama from winning the White House and becoming the first African American president in the nation’s history.”

The press was less certain about another matter however. Before any election verdict can be rendered, the votes have to be counted. And a good deal of last week’s campaign coverage was about potential problems not in the polls, but at the polls.

There was, for example, this sobering conversation on the Oct. 29 edition of PBS’ NewsHour between senior correspondent Gwen Ifill and two lawyers familiar with election law, Barbara Arnwine and Ben Ginsberg.

When Ifill asked the basic question about the country’s ability to process what by many estimates would be unprecedented turnout at its voting places—“are we ready?”—she got the same answer from both guests.

“No,” said Arnwine. “With a record turnout and continued underinvestment by our states and our federal government on election procedures…we are not ready yet.”

“No we’re not,” concurred Ginsberg, who cited inevitable “human error” as well as the “great inconsistency among the counties [that control the voting process] in a given state, to say nothing of between the states.”

Who knows how big a story that could turn out to be on Election Day?

The No. 2 story from Oct. 27-Nov. 2 was the continued fallout from the economic crisis, which accounted for 13% of the newshole, a number that is lower than it had been in recent weeks. That topic generated the most coverage (19% of the newshole) in the newspaper and online sectors. But coverage of the financial meltdown and credit crunch has been steadily decreasing. It was at 20% of the newshole the previous week and as recently as four weeks ago, the topic accounted for 36% of the overall coverage.

The third-biggest story of the week, at 2%, was about Congressional scandals, specifically the conviction of veteran Alaska Senator Ted Stevens, on corruption-related charges. That was followed, also at 2%, by the situation in Iraq. And the No. 5 story of the week was news of the killings of the mother, brother and seven-year-old nephew of actress and singer Jennifer Hudson.

In Election Week, Media Pivots from Race to Rahm

A Plumber (Sort of) Gets His 15 Minutes