How Different Media Have Covered the General Election

When it comes to coverage of the campaign for president 2008, where one goes for news makes a difference, according to a new study.

In cable, the evidence firmly suggests there now really is an ideological divide between two of the three channels, at least in their coverage of the campaign.
Things look much better for Barack Obama—and much worse for John McCain—on MSNBC than in most other news outlets. On the Fox News Channel, the coverage of the presidential candidates is something of a mirror image of that seen on MSNBC. 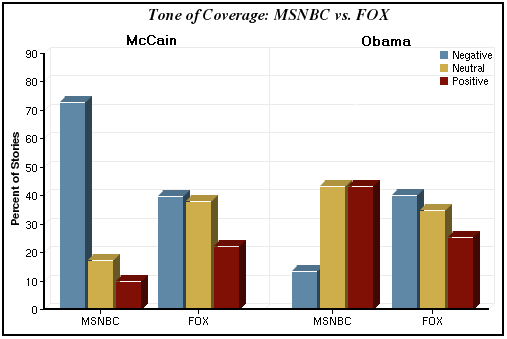 The tone of CNN’s coverage, meanwhile, lay somewhere in the middle of the cable spectrum, and was generally more negative than the press overall.

On the evening newscasts of the three traditional networks, in contrast, there is no such ideological split. Indeed, on the nightly newscasts of ABC, CBS and NBC, coverage tends to be more neutral and generally less negative than elsewhere. On the network morning shows, Sarah Palin is a bigger story than she is in the media generally.

And on NBC News programs, there was no reflection of the tendency of its cable sibling MSNBC toward more favorable coverage of Democrats and more negative of Republicans than the norm.

Online, meanwhile, polling tended to drive the news. And on the front pages of newspapers, which often have the day-after story, things look tougher for John McCain than they tend to in the media overall.

These are some of the findings of the study, which examined 2,412 stories from 48 outlets during the time period from September 8 to October 16. [1] The report is a companion to a study released October 22 about the tone of coverage overall. This new report breaks down the coverage of tone by specific media sectors—print, cable news, network television and online.

These findings augment what was learned from a broader report on campaign media coverage released a week earlier entitled “Winning the Media Campaign: How the Press Reported the 2008 General Election.” That study found that in the media overall—a sample of 43 outlets studied in the six weeks following the conventions through the last debate—Barack Obama’s coverage was somewhat more positive than negative (36% vs. 29%), while John McCain’s, in contrast, was substantially negative (57% vs. 14% positive). The report concluded that this, in significant part, reflected and magnified the horse race and direction of the polls.

FOOTNOTE:
1. Secondary coding was performed on a subset of the campaign stories to further examine the tone of the coverage. That sample included 857 stories from 43 outlets.