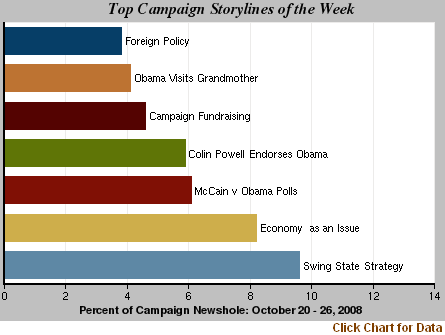 When Colin Powell endorsed Barack Obama on the Oct. 19 edition of Meet the Press, it was a headline-grabbing event that drove the next day’s news cycle. By midweek, however, the story had virtually vanished. When Joe Biden said that an international crisis would “test the mettle” of a new President Obama, the McCain camp quickly produced an ad jumping on the perceived gaffe. But that episode accounted for only about blip of the week’s campaign coverage (about 1%).

Even Joe the Plumber—the Ohio man introduced at the Oct. 15 debate who instantly became a household name—edged toward anonymity last week, accounting for only 1% of the campaign coverage, one-eighth the attention he received the previous week, despite becoming a staple of McCain’s stump speech and a focus of his new ads.

In the final days of the race for president, seemingly nothing but the algebra of the electoral map appears to have staying power.

As the days tick down toward Nov. 4 with the momentum clearly tilting toward Obama—and with the press searching intently for developments that could change that dynamic—stories appear to have a shorter shelf life, often flashing across the media radar screen in a matter of hours rather than days.

Indeed, no single narrative dominated last week’s coverage. The top storyline, the fight over battleground states, accounted for 10% of the campaign newshole from Oct. 20-26, according to the Campaign Coverage Index from the Pew Research Center’s Project For Excellence in Journalism. That’s the lowest level of coverage for any leading weekly narrative since the general election campaign began in early June.

In a campaign and media environment now focused strongly on the shape of the race, one staple of weekly coverage is the attention to strategy and tactics. Coverage of swing state battles (10% of the newshole), polls (6%), and fundraising (5%), and some other related storylines accounted for about one-quarter of last week’s newshole. Add in the Powell endorsement (at 6%), which was frequently discussed in terms of its political potency, and that broad theme fills almost 30% of the coverage.

Last week, policy debates and issues accounted for another 17% of the coverage. The broader U.S economy—including differences in tax policy and McCain’s sharpened line of attack that Obama favors redistributing wealth—was the top storyline in that category (at 8%). At the same time, coverage of the candidates’ reactions to the financial crisis that struck with hurricane force in mid-September dropped all the way to 2%.

In the second half of September, by contrast, the economic crisis utterly dominated election coverage. By last week, it had almost disappeared. Three weeks ago, the increasingly harsh and personal attacks emanating from the candidates represented the No. 1 campaign story. Last week, the rhetoric was still sharp, but the coverage was down to 2%. Two weeks ago, the third and final presidential debate was the leading campaign storyline. Last week, that aftermath of that event was a statistical non-story.

One candidate did gain some ground over the other in the media. In the competition for exposure, Obama was a significant or dominant factor in 61% of the campaign stories from Oct. 20-26, compared with 50% for McCain. That’s the Democrat’s largest advantage in weekly press attention in seven weeks, a lead somewhat attributable to the coverage—filling 4% of the newshole—of his visit to his ailing grandmother in Hawaii. 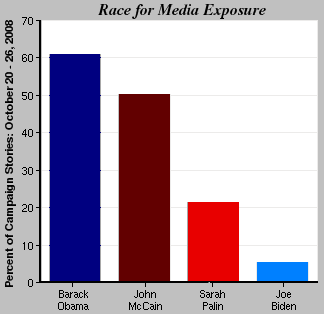 Thanks in part to the news that the campaign spent $150,000 on her wardrobe, Sarah Palin registered in 22% of the coverage last week, up from only 8% the previous week. And despite the flap over his gaffe, Biden was a dominant or significant factor in only 5% of the coverage.

Overall, the presidential campaign accounted for 52% of the newshole from Oct. 20-26 as measured by PEJ’s News Coverage Index. (That is virtually the same as the previous week’s total of 51%). The election was the No. 1 story in all five media sectors and exceeded 50% of the newshole on network news (52%), in radio (60%) and on cable news, where it accounted for 79% of the airtime studied. For the second straight week, the campaign generated more than twice as much coverage as the economic crisis. But it was the transitory nature of nearly everything that stood out. 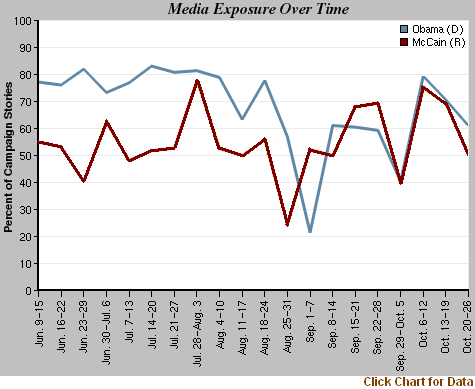 At the beginning of last week, Obama’s endorsement from former Secretary of State Colin Powell—which potentially could have eased some concerns about the Democrat’s national security credentials—was a leading campaign narrative.

The front page of the Oct. 20 edition of USA Today, like many media outlets, touched on the possible political impact, noting that “The long-anticipated announcement, which came with praise for Republican John McCain but harsh criticism of his negative attacks, gave Democrat Obama perhaps the campaign’s most coveted endorsement.”

But if the McCain camp had to cope with an unwelcome endorsement, it got something of a gift when Biden—with his history of verbal miscues—seemed to raise the experience issue anew by predicting that Obama would be tested by a foreign policy crisis within the first six months of taking office.

In an Oct. 21 interview on MSNBC, correspondent Andrea Mitchell asked Obama supporter and former Senate Majority Leader Tom Daschle about the comment. When Daschle said Powell’s support “says all you need to know about how we can size up Barack Obama’s capacity for leadership and strength,” Mitchell responded that “You guys are lucky that you have the Powell endorsement…to take the sting out of what Joe Biden said.”

To the extent the dialogue focused on the economy last week, both campaigns pounded out now familiar themes, with McCain accusing Obama of a socialist approach to wealth redistribution and Obama claiming that McCain’s policies favor the wealthy over the working class. In an Oct. 20 ABC evening news story comparing the two men’s plans, reporter Bill Weir concluded that families making $50,000 or $100,000 a year would pay slightly less under Obama, but warned that both candidates would drive up the national debt.

“No matter what your tax bracket,” he added, “it is a case of vote now, pay later.”

But the biggest narrative of the week was related to the horse race. And as the candidates entered the homestretch, an Oct. 23 CBS Evening News story focused largely on the turf on which they are running.

“A sea of 35,000 supporters greeted Barack Obama in downtown Indianapolis this afternoon, physical evidence that one of the most reliably Republican states in the nation is suddenly very much in play, very late in the game,” said correspondent Dean Reynolds. “By themselves, big crowds prove little, but where Obama is drawing them now is impressive.”

After the campaign, the No. 2 story overall last week was the financial crisis, which accounted for 20% of the newshole from Oct. 20-26, down modestly from 23% the previous week. As has been the pattern for the past two weeks, the election has clearly re-emerged as the dominant story after losing top billing in late September and early October. The economic meltdown got the most coverage last week in the online sector, at 28% of the newshole.

The No. 3 story, at 2% of the newshole, was about the 2008 Congressional races, with some of the focus on speculation about potential Democratic gains on Nov. 4. That was followed closely by coverage of the U.S. economy not directly related to the Wall Street implosion and credit crunch (also at 2%). The No. 5 story, at 2% as well, involved the situation inside Iraq.