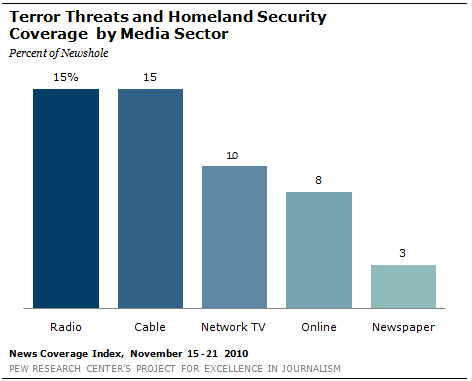 For much of this election season, media coverage has been driven by a series of discrete, often unexpected events—from Rev. Wright’s sermons to the war in Georgia, from candidate gaffes to John McCain’s selection of Sarah Palin. While the polls and election fundamentals of the race haven’t changed much, the campaign itself seemed to lack a master narrative.

Last week, the frightening financial meltdown on Wall Street re-oriented the campaign and re-wrote the storyline. The crisis was not only the week’s top story—marking only the second time this year that an event other than the campaign emerged as the No. 1 topic of the week. It also raised the possibility that a major policy issue, the economy, might emerge as the decisive factor of the campaign. Last week, certainly, the financial crisis was the top theme in the election coverage itself, accounting for 43% of the campaign newshole for Sept. 15-21, according to the Campaign Coverage Index from the Pew Research Center’s Project for Excellence in Journalism.

The week also may have marked the end of a distinct phase of the race—the Palin phase. As Obama and McCain scrambled to address the economic crisis, Palin—who had dominated media attention since Aug. 29—receded from the headlines.

In the first blush of horserace analysis, abetted by daily tracking polls, the media consensus was that the Obama may have benefited from the sudden change of subject. But it was far too early to predict any lasting effect. The first presidential debate takes place on Friday, and it remains to be seen whether that event will reinforce or replace the economy as the key narrative.

One other feature of the week of Sept. 15-21 was that McCain was a bigger newsmaker than Obama, a further sign that exposure does not always translate into good news. McCain was a significant or dominant factor in 68% of the campaign stories studied for the week. This marked the first time in the general election period that the GOP nominee was the No. 1 newsmaker. But one element of that coverage was the controversy McCain ignited when he described the economic fundamentals as “strong.” Obama trailed McCain at 61%. Palin fell to 26%, and that was about half the coverage she had attracted the previous two weeks. Biden, who has consistently been an afterthought in the coverage, was at 5%.

Although it accounted for nearly half the campaign newshole, the focus on the economy practically came out of the blue. While the nation’s fiscal health has been shaky for some time, the economy has often been relegated to secondary status as a campaign storyline. In the week of Sept. 8-14, for example, the issue accounted for only 4% of campaign coverage. And in the past two months (before last week), it exceeded 5% of the election newshole in only one week. (This is separate from coverage of the economy in general, apart from the campaign).

The economy’s sudden emergence as the dominant election issue highlights the degree to which the campaign has seemed to lurch from big event to campaign episode without much sustained narrative. In the 15 weeks since the general election campaign began, there has been a different top campaign storyline every week, with two exceptions. Obama’s overseas trip dominated two straight weeks in July and now the economy has spent two weeks as top theme (June 9-15 and Sept. 15-21). The top storylines have most often involved strategy and horserace. Indeed, last week was only the fourth week since early June that a policy issue has been the top theme.

Even with the focus on the fiscal crisis, strategic themes accounted for almost one-fifth (18%) of the campaign coverage last week. The top storyline in this category was polls (5%), many of which tried to measure any shifting sentiment related to the economic news. The candidates’ strategy in the key battleground states was next at 4%, followed by fundraising at 3%. 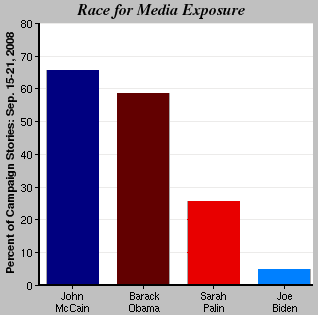 One effect of the economic crisis, quantitatively, was reduced attention to the background and impact of GOP vice presidential nominee Palin. Last week, themes involving the Alaska Governor accounted for 17% of the coverage, well down from the previous two weeks when they accounted for 50% and 45% respectively. The media still vetted her public record, and that filled 13% of the newshole. But press attention to her personal life virtually vanished, accounting for less than 1% of the coverage.

Overall, the campaign filled 31% of the newshole as measured by PEJ’s News Coverage Index from Sept. 15-21. That’s a drop-off from 39% the previous week. But more notably, the election was the No. 2 story of the week, trailing the economic crisis, which accounted for 37% of the newshole. That’s only the second time in 2008 that a story other than the campaign topped the weekly index, the first being the Russia-Georgia conflict (at 26%) from Aug. 11-17. Even so, the campaign was still the No. 1 story in the two media sectors that consistently devote the most time to it—cable news (61% of the airtime studied) and radio (at 44%).

For much of last week, the Obama and McCain campaigns were on high alert as they tried to quickly pivot to address the news from the financial markets—even as many observers noted that their options and power were limited.

“In truth, neither candidate is in a position to do anything about the current crisis,” noted CNN’s Candy Crowley on Anderson Cooper’s Sept. 18 program. “The key is to sound and seem like a guy who can take control and fix a problem like this while suggesting the other guy is totally incapable.”

The next day, on ABC’s Good Morning America, George Stephanopoulos suggested that the depth and breadth of the problem would limit each man’s political maneuverability. Stating that McCain had gotten off to a “rough start” with his statement about good economic fundamentals, Stephanopoulos added that, “Now, I think they’re both getting scared straight by the magnitude of this financial crisis.” 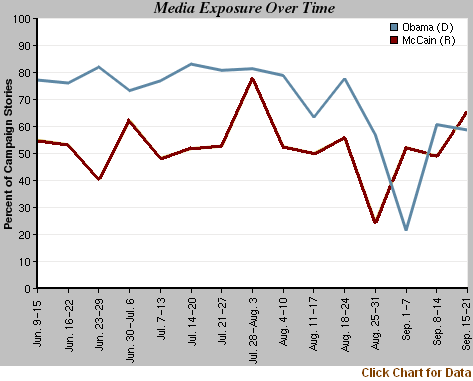 Much of the media commentary concluded that the events of the past week would have a major, if still incalculable, impact on the course of the campaign.

On CNN, correspondent John King said, “This has changed the campaign and it’s hit the pause button on everybody’s strategy.” Stephanopoulos echoed that sentiment by declaring that the meltdown “changes just about everything.”

Not surprisingly, there was also an initial effort by the press to read the re-arranged political tea leaves. A series of new polls seemed to reflect a drop in McCain’s post-convention bounce and some marginal gains for Obama.

“Obama rebounds in polls as economic crisis bites” was the headline on an AFP story posted Sept. 18 on Yahoo News! The story, citing two new national polls with Obama narrowly in the lead, said the finding in one survey “suggested that economic arguments may be swaying support towards Obama.”

The same story also concluded that after the Republican ticket got a boost from the Palin selection, “recent opinion snapshots polls appear to show Palin’s injection of momentum for McCain diminishing.”

That did not stop the press from continuing to publish the results of reporting that had been in the field on Palin. On Sept. 17, for example, the NBC newscast aired a fact-check that offered some contradictory evidence to question Palin’s statements that Alaska provides about 20% of the U.S. supply of gas and oil and that she said “thanks but no thanks” to the infamous Bridge To Nowhere.

“The McCain campaign has carefully controlled access to Palin” noted correspondent Savannah Guthrie, during that report. But that certainly hadn’t kept the Alaska Governor out of the headlines, at least until an economic crisis of massive dimensions pushed almost every other campaign story to the sidelines.

The financial crisis and Wall Street upheaval accounted for 37% of the newshole for Sept. 15-21, as measured by PEJ’s News Coverage Index. That marked the most media attention to a non-campaign story since the California wildfires accounted for 38% of the newshole from Oct. 21-26, 2007. The economy was the No. 1 story in newspapers (48%), online (33%) and in the network news (41%), though on cable and radio the campaign still won the day.

The No. 3 story, after the campaign, was the aftermath of Hurricane Ike, which accounted for 7% of the newshole. The Southern California train crash that took 25 lives was next at 2%. And the Sept. 20 attack on a Marriott Hotel in Islamabad that killed more than 50 people made Pakistan the No. 5 story, at 1% of the newshole.

Veep Debate, Palin Rule Campaign News
A Plumber (Sort of) Gets His 15 Minutes
As the Candidates Head Down the Stretch, Horse Race Dominates
Economy Shrinks, Tactics Grow, in Media Narrative
Near Campaign's End, It's All About Numbers