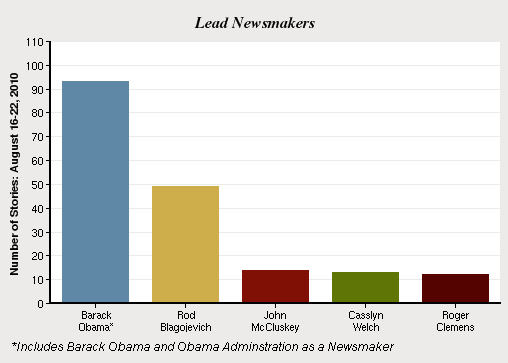 speech to a crowd of about 200,000 in Berlin provided a startling campaign visual to punctuate a week of remarkable media attention. A story about the event on CNN.com, complete with video, quoted the network’s European political editor saying Obama “is one of those politicians who reaches parts other politicians don’t reach.”

But not all of the coverage last week was flattering. By the time Obama concluded a week-long overseas tour intended to burnish his geopolitical credentials, some press post-mortems questioned whether adulation abroad would translate into votes at home and whether the candidate had the specifics to back up his popularity. And in a reprise of a primary-season burst of introspection, the press devoted significant attention to whether it was tilting toward the Democrat.

Whatever the tone of the coverage, Obama’s visit to the Middle East and Europe was an extraordinary media event. Coverage of the trip consumed 51% of the campaign newshole for the week of July 21-27, according to the Project for Excellence in Journalism’s Campaign Coverage Index. That was enough to make it the second-biggest campaign story line since PEJ began tracking them in mid-March. (Only coverage of the April 22 Pennsylvania primary, during the week of April 21-27, generated more attention.)

The trip also helped Obama, for the seventh consecutive week, dominate John McCain in the contest for media exposure. The Democrat was a significant or dominant factor in 81% of the campaign stories studied compared with 53% for McCain. Interestingly, even with all the attention to Obama’s trip, those numbers dovetail closely with the weekly coverage averages since the general election campaign began in June. In that period, Obama has factored in 79% of the coverage with McCain at 52%.

One reason Obama’s advantage might not have been greater last week was that McCain managed to inject himself into the media narrative by challenging his opponent over Iraq policy and with some counter-programming—including a visit to a German restaurant in Columbus Ohio while Obama was in Germany. But if you combine the top three story lines of the week—Obama’s trip (51% of the newshole), the debate over Iraq that was largely triggered by Obama’s visit there (7%), and press examination of its treatment of Obama (7%)—those three threads account for two-thirds of the week’s campaign coverage.

The biggest story line dominated by McCain was the speculation that he might soon make a vice-presidential pick. It accounted for 4% of the campaign newshole. But even some of those stories were couched in the context of a candidate desperately needing to create news of his own. A July 25 Washington Post story on the GOP veepstakes, for example, noted that McCain “was anxious to counter the blanket media coverage that followed Sen. Barack Obama on his overseas journey.”

Another part of the McCain campaign’s message may be resonating with the press. The idea that the Democrat is getting more favorable media treatment, a theme driven in part by conservative talk hosts, was revisited at length last week. For Obama, that could prove to be a case of ominous déjà vu. In late February, Hillary Clinton’s campaign’s cries of media bias—abetted by a Saturday Night Live sketch lampooning the press as Obama groupies—led to a spate of similar coverage. And that was followed by tougher media scrutiny of the Illinois Senator that, several weeks later, became a full-fledged frenzy after Rev. Wright’s incendiary speeches from the pulpit surfaced.

When all was said and done last week, Obama’s overseas trip also helped drive up the volume of campaign coverage. The campaign accounted for 38% of the general newshole for July 21-27 as measured in PEJ’s News Coverage Index, a jump of 11 points from the previous week. That’s the highest level of coverage for the campaign since the week of June 2-8, the period when the Democratic primaries ended and Obama claimed the nomination. The campaign was easily the top story in all five media sectors last week, and led in cable news, where it filled 63% of the airtime studied. It is unclear whether this marks an end to the summer doldrums, relatively speaking, in media campaign coverage or was simply an unusual week driven by the Obama trip.

The double-edged sword of media coverage last week was manifest on the July 22 CBS newscast, which featured a Katie Couric interview with the candidate from Amman, Jordan. When Obama noted that the focus on Iraq meant that U.S. had “shifted away from the central front of terrorism,” the CBS anchor endeavored to push him hard to acknowledge that the surge—which he opposed—had reduced violence in Iraq. “But talking microcosmically,” Couric asked, with an edge to her voice, “did the surge, the addition of 30,000 additional troops, help the situation in Iraq?” 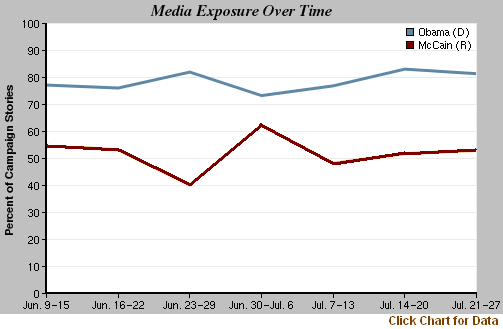 Later in the same half-hour, the newscast aired a story contrasting the media attention to the “Obama-thon” world tour with the coverage his rival was getting. According to the story, 40 journalists, at a cost of $20,000 a head, traveled with Obama. But when McCain touched down on a tarmac in New Hampshire, he was greeted by only two reporters.

That was part of a larger spate of coverage looking at the question of press bias and uneven coverage.

A July 23 page-one piece by Chicago Tribune columnist John Kass took on the issue. “Reporters are generally biased toward Obama…This situation continues on his overseas campaign trip. TV anchors were all but ululating…at his approach, desperate for interviews after he sank that three-point shot in front of American troops and hit nothing but net.”

On that same day, CNN’s Lou Dobbs, a vocal critic of the media’s coverage, read a series of emails containing the same basic sentiments. “I thought the media was supposed to be unbiased,” wrote one viewer. “When did the media elect Obama?” added another. Yet another called it “the worst one-sided coverage I have ever seen.”

By the end of the week, however, some analysis of the trip was a reminder that quantity of coverage and tone of coverage can be two distinct things. And while many media outlets credited Obama with a stylistically successful and largely gaffe-less trip, some questioned whether it actually benefited the candidate.

“Barack Obama conquered the Middle East and Europe last week, but on Saturday he returned to face a more challenging battleground; middle America,” said a July 27 Los Angeles Times story. After citing two new polls, the story said none of them suggested “a change in the problem Obama’s trip sought to address: Though most voters prefer the Democrat’s positions on the economy and other domestic issues, most believe McCain is more qualified to be president, especially as a leader on national security.”

A similar theme ran through a July 27 Washington Post story that carried the headline: “Embraced Oversees, But to What Effect? Obama Says Voters Still Question Him.”

In the CBS story on the amount of media attention generated by Obama, Couric worded the same basic question a little differently. “Will the summer of love last?” she asked. “And will voters want to go steady with Barack Obama? We’ll find out in November.”

The other major stories last week, which trailed campaign coverage by a significant margin, included a variety of economic, international, and meteorological events. The No. 2 story behind the election, as measured by PEJ’s News Coverage Index for July 21-27, was the troubled U.S. economy, which filled 6% of the newshole studied. That was followed by the impact of Hurricane Dolly (5%), the storm that slammed into the Texas-Mexico border. Next, at 4%, came news of the arrest of Radovan Karadzic, the former Bosnia Serb leader accused of war crimes in connection with the 1990’s bloodshed in the former Yugoslavia. Finally, the No. 5 story, at 2%, was something of a man-bites-dog tale. For a change, coverage of oil and gas prices reported the news that both were heading down last week.