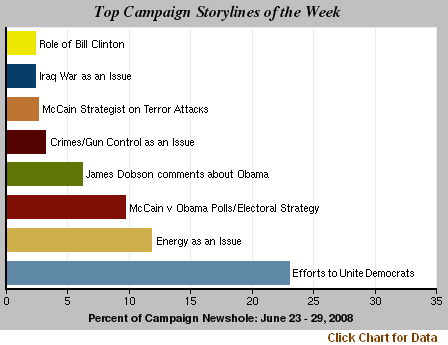 With Obama and Hillary Clinton’s joint New Hampshire campaign appearance driving the coverage, the theme of divided Democrats—and efforts to unite them—accounted for nearly one-quarter (23%) of the campaign newshole for the week of June 23-29, according to PEJ’s Campaign Coverage Index. When you add in the seemingly uneasy relationship between Obama and Bill Clinton, speculation about the vice-presidential pick and the Denver convention, the chunk of election coverage related to the Democrats’ intra-party issues swells to 29%.

For the second week in a row, differences between Barack Obama and John McCain over energy policy played a major role in the campaign narrative, accounting for 12% of the newshole. No other specific issue came close to generating that level of attention. But combining energy with crime, Iraq, health care, the economy and national security lifts coverage of issue differences between the candidates to more than one-fifth (21%) of the week’s election coverage. In addition, the classic horserace theme of political strategy and polling filled another 10% of the newshole.

But with Hillary Clinton and Obama making their first public appearance together since their contest ended—and with the wounds not fully healed—their June 27 rally in tiny Unity, New Hampshire not only generated major headlines for Obama: Clinton, the ex-candidate who virtually disappeared from the news two weeks ago, managed to attract almost as much coverage last week as McCain.

In the few weeks since the general election campaign began in earnest, Obama has received significantly more coverage than his Republican rival. But from June 23-29, that gap widened to a 2-1 chasm. Obama was a significant or dominant factor in 82% of all the campaign stories compared with only 40% for McCain. At the same time, Hillary Clinton (32%) and Bill Clinton (8%) combined to equal McCain’s total.

Obama’s large lead over McCain last week in the contest for media exposure can be attributed to several factors. One, particularly evident during the week of the New Hampshire rally, was the amount of coverage devoted to Obama’s efforts to unite his party. (In contrast, the theme of McCain trying to rally the GOP faithful behind him attracted virtually no coverage last week, less than 1%).

At the same time, Obama has thus far generally proven to be more of a lightning rod for controversy and coverage than McCain. Last week, evangelical leader James Dobson’s attack on Obama for “distorting the traditional understanding of the Bible”—and Obama’s response that Dobson was “making stuff up”—generated enough attention to fill 6% of the newshole. Factor in other Obama-related controversies, including rumors about his religion and accusations that he is an elitist (a charge made by former George Bush adviser Karl Rove), and that category of coverage increases to 11%.

McCain was not controversy-free himself last week. Remarks by his aide, Charlie Black, that a terrorist attack on the U.S. would help the GOP candidate created a flap, but only generated about half as much news (3%) as the Dobson-Obama exchange.

It is difficult to predict at this point whether Obama will continue to regularly outpace McCain when it comes to quantity of coverage. But the last several weeks suggest that as a precedent-setting candidate who is the lesser known quantity to many Americans, Obama may spend more time in the glare of the media spotlight.

During the primary season, the principal focus of the Campaign Coverage Index was on the competition for exposure among the candidates. That was measured by the number of stories in which a candidate played a significant role (as a subject of between 25% and 50% of the story) or a main newsmaker role (at least 50% of the story). Now in the general election season, the CCI is also highlighting another facet of the coverage, the campaign storylines of the week, the specific themes that make up the campaign coverage. They are measured as a percentage of overall coverage, or newshole. We will continue to track the quantity of coverage generated by the leading candidates. The CCI is an addition to PEJ’s News Coverage Index, which tracks all the topics in the news and which will continue to appear at the bottom of the CCI.

For the week of June 23-29, coverage of the race for the White House filled 27% of the overall newshole as measured by PEJ’s News Coverage Index—a minor increase from the previous week when it registered at 23%. The campaign was the No. 1 story in all five media sectors, but nowhere did it approach the amount of coverage (60% of the newshole) that it generated in the cable news universe. Even the radio sector, which routinely finishes closely behind cable in attention to the election, could not keep pace. It filled 26% of the airtime studied last week with news and commentary from the campaign trail. 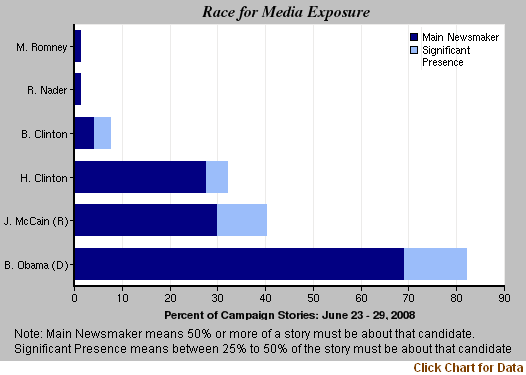 The single biggest campaign event happened late last week, the Obama/Clinton rally in the tiny town that split its primary votes evenly between the two. “Arriving at a Place Called Unity,” was the caption that ran on page 1 of the June 28 New York Times. But only two days earlier, the paper ran a front-page story—headlined “Delicate Talks for 2 Democrats on Path to Unity”—suggesting that a full peace might not yet be at hand.

“With the help of one of Washington’s best-connected lawyers, Senators Barack Obama and Hillary Clinton are negotiating a thicket of complicated issues,” the story reported. “Perhaps the thorniest question—what to do about Bill Clinton, who friends say continues to refight the bitter primary fight—has yet to be raised by either side, advisers said.”

The subject of Bill Clinton was a focus of discussion on Dan Abrams’ June 24 MSNBC show. And the former President’s terse statement saying that he “is obviously committed” to ensuring Obama’s election did not strike everyone as a full-throated endorsement of the presumptive nominee.

If there’s been virtually no coverage of McCain’s need to unite the Republican Party lately, there was some attention paid to another potential problem for the Arizona Senator—the candidacy of former Republican Congressman from Georgia, Bob Barr.

“Some Republicans are worried that former GOP congressman Bob Barr—running as a Libertarian—could take key conservative votes away from John McCain,” declared an AP story posted on AOL News on June 23. That story went on to quote one pundit saying that “Bob could be the Ralph Nader of 2008.”

Meanwhile, the real Ralph Nader made a little news himself last week. In an interview with the Rocky Mountain News, he accused Obama of failing to devote enough time to the economic exploitation of the underclass and of trying to “talk white” in the campaign.

The No. 2 story of the week behind the campaign was the widely condemned and disputed election in Zimbabwe, which accounted for 7% of the newshole as measured by PEJ’s News Coverage Index. Coverage of that event was biggest in the more international-oriented online media sector, where it filled 12% of the newshole. Next came coverage of those still rising gas and oil prices, also at 7%, followed by the subject with which it is inextricably intertwined, the U.S. economy (at 5%). The fifth-biggest story last week was the Supreme Court decision to strike down Washington D.C.’s handgun ban. That subject got the most coverage in the radio sector (9%) where it generated some buzz on the talk airwaves.