On the same night that Barack Obama made history by 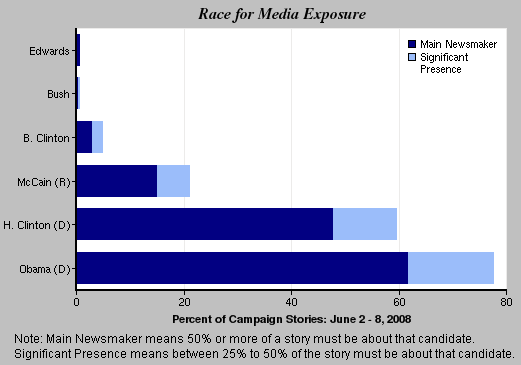 clinching his party’s nomination and John McCain kicked off the general election with a prime-time policy address, it was the vanquished Democrat who may have posed the most relevant question.

In a spirited non-concession speech at Manhattan’s Baruch College, Hillary Clinton gave public voice to the issue that resonated throughout the media for much of the week. “What does Hillary want?”

The answer is, she won’t say yet.

In the final week of the 2008 Democratic primary campaign, Obama was the top newsmaker. In all he appeared as a dominant or significant factor in 77% of the campaign stories, according to PEJ’s Campaign Coverage Index for June 2-8. That was his highest single-week total for the year. Clinton trailed him in the battle for exposure, a major figure in 60% of stories. (An analysis of primary-season coverage from Jan. 6 through June 8 reveals that on an average week, Obama registered in 57% of the coverage compared to 50% for Clinton. McCain trailed badly at 27%.)

But sometimes numbers don’t tell the full story—and last week was a case in point. Despite Obama’s edge in quantity of coverage, Clinton was clearly the driving force in a media narrative that focused largely on three questions. Would she fight on to the convention? Would she unconditionally support Obama? Would she seek the vice-presidential slot?

A look at the themes in last week’s coverage helps tell the story. The subjects of Clinton as a possible vice-presidential nominee filled 16% of all last week’s campaign stories studied; the decision to suspend her campaign filled another 9%; and calls for her to withdraw made up another 4%; Thus the themes around “what does Hillary want” alone accounted for 29% of all last week’s campaign coverage studied. The theme of Obama, the first African-American to become a major party nominee for President, emerging as a historic candidate, by contrast, accounted for 7%.

Just over 2% of the coverage was devoted to Obama’s search for a vice president other than Clinton, and another 3% to lingering controversies involving the Trinity Church in Chicago. 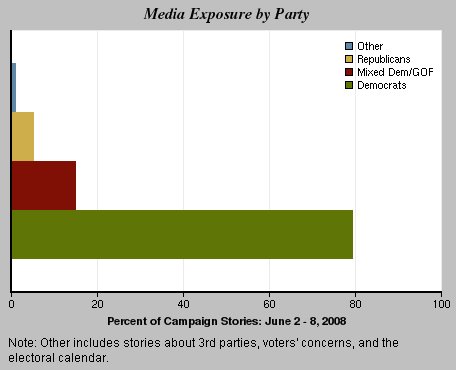 It was also a week in which Bill Clinton, whose public profile has fluctuated wildly during the campaign, resurfaced as a headline grabber. And not in a good way. Registering in 5% of the coverage, the ex-President responded to an unflattering profile in Vanity Fair by calling its author, Todd Purdum, “sleazy” and a “scumbag”—an outburst that triggered a campaign apology.

(When the list is compiled of “journalists” who had an impact on this campaign, Mayhill Fowler’s name will be on it. A 61-year-old blogger for the Huffington Post, Fowler broke the story of Obama’s remarks at a fundraiser about “bitter” voters who “cling” to guns or religion. And she triggered Clinton’s attack on Purdum by shouting a question to him in a rope line. Fowler’s blurring of the lines between journalist and citizen is certain to fuel the debate over standards and practices in the new media universe. But she can lay claim to two significant scoops and the attention that brings. In recent days, Fowler managed a major media trifecta, being profiled in the Los Angeles Times, New York Times, and Washington Post.)

GOP nominee John McCain made some news of his own this week by delivering a major speech in Louisiana in which he expressed his own vision of change in this election. And he issued a challenge for Obama to meet him in a series of 10 town hall meeting-style debates. But with the media glued to the end of the Democratic battle, he was a significant or dominant factor in only 21% of stories studied, his lowest level in a month.

Overall, by filling 50% of the newshole last week, the campaign generated its third- highest level of weekly coverage in 2008, according to PEJ’s News Coverage Index from June 2-8. (The biggest week, coming in at 55% of the newshole, was Feb. 4-10, the Super Tuesday primary period.) As has typically been the case, the media sectors devoting the most time to the campaign last week where those that included the opinion-driven talk shows. The election consumed a full 74% of the airtime studied on cable and 58% of the airtime on radio. 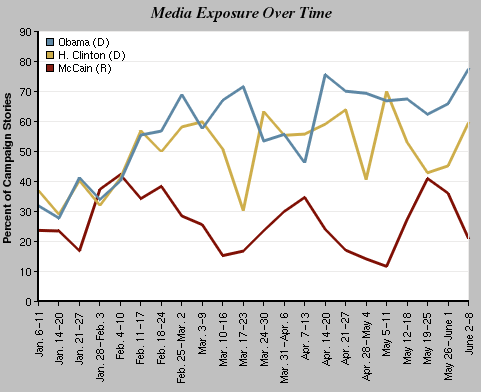 The Campaign Coverage Index is an addition to PEJ’s NCI report, which tracks what stories the media covered in the previous week. The CCI offers a greater level of detail of the campaign coverage. That includes the percentage of stories in which a candidate played a significant role (as a subject of between 25% and 50% of the story) or a main newsmaker role (making up at least 50% of the story). The Index also identifies the key narratives in the reporting and the “Line of the Week,” a statement from a journalist or source that in our researchers’ estimation seems either to capture the story or is particularly colorful. PEJ’s News Coverage Index will not disappear. It will come at the bottom of the CCI.

Last week began with the Clinton forces still talking about victory and perseverance. During the June 2 edition of CBS’ Early Show, one day after a big Clinton win in Puerto Rico, host Harry Smith asked campaign chair Terry McAuliffe about her intentions. “Listen, we’ve said that we’ll keep all our options open,” McAuliffe responded. “Hillary Clinton wins all the swings states…This is about winning in November.”

After the June 3 Montana and South Dakota primaries helped Obama reach the magic number of delegates, Clinton declined to acknowledge him as the nominee during a speech in which supporters urged her to battle on to the Denver convention. “No Concession,” said the page 1 headline in the June 4 San Francisco Chronicle. Inside the story, there was speculation about her ultimate strategy: “Even now, the nomination in hand, Obama finds himself dogged by a new Clinton challenge that she join his ticket.”

The news that Clinton, under considerable pressure, had decided to formally suspend her campaign and endorse Obama did not end the questions or speculation. On the June 6 edition of MSNBC’s Hardball, host Chris Matthews discussed Clinton’s next moves. “One, she’ll officially bow out of the presidential race,” he noted. “Two, she’ll support Obama. And three, well that’s the question. What then? Will she fully endorse Obama? Does she want to be VP? Will she go back to the Senate…Or will she start planning for her next presidential race?”

Clinton’s valedictory June 7 speech in Washington in which she threw her support to her rival raised yet another question as fodder for the media narrative. Would her passionate supporters, many of whom complained of sexism and media bias in the campaign, follow her lead? The June 8 Washington Post report on the speech noted that some of her backers in the audience booed at the mention of Obama’s name while bathing her in adulation.

“The crowd’s undiminished enthusiasm was of indication of the challenges facing Obama,” the story declared. Thus, the week ended on a theme that will no doubt surface frequently in the coverage of the general election campaign.

No story came close to competing with the election campaign last week. The second-biggest story, according to the News Coverage Index for June 2-8, was the continuing rise in gas and oil prices, filling 4% of the newshole. The troubled U.S. economy, a mainstay of recent coverage, was next at 3%. The arraignment of terror suspects, including alleged 9/11 attack mastermind Khalid Sheikh Mohammed, made U.S. efforts to combat terrorism the fourth-biggest story at 2%. And the death of rock n’ roll legend Bo Diddley was fifth at 2%. Thanks to the front-page obituaries that marked his passing, that sad event generated more coverage in newspapers (5%) than any other sector.