We now know who the Democratic nominee

“is gonna’ be,” declared NBC’s Washington bureau chief Tim Russert the night of May 6 as results became clear. The cover of Time magazine showcased a beaming Barack Obama with the headline: “And The Winner* Is…” Many press accounts described the Illinois Senator’s return to Capitol Hill late last week as a “victory lap.”

In a campaign with more twists than a Twilight Zone episode, the media all but officially pronounced Obama the Democratic nominee last week after he emerged with a big win in North Carolina and a near-tie in Indiana. There are only a handful of Democratic primary contests left. And the consensus was that Hillary Clinton needed a stronger showing on May 6 to change the increasingly insurmountable-looking pledged delegate math and/or the superdelegates who have been steadily migrating to Obama.

Ironically, in the week that calls for her to drop out grew louder, Clinton generated her highest level of coverage this year. According to PEJ’s Campaign Coverage Index, she was a significant or dominant factor in 70% of the campaign stories from May 5-11. Obama was a close second, at 67%. But at only 12%, Republican John McCain ended up with his lowest level of coverage in 2008.

One other narrative also began to suggest itself last week in the coverage. Even though McCain has been virtually relegated to the role of bystander as the Democrats battled on, that may soon change. Late last week, coverage began to focus on Obama’s pivot away from his race with Clinton toward a campaign against the presumptive GOP nominee. That was a theme of a May 11 New York Times story noting that “Senators John McCain and Barack Obama are already drawing up strategies for taking each other on in the general election, focusing on the same groups — including independent voters and Latinos — and about a dozen states where they think the contest is likely to be decided this fall, campaign aides said.”

Obama’s anointment as nominee-in-waiting comes almost three months after the media narrative established him as a frontrunner—albeit a tenuous one. That occurred the week of Feb. 11-17, when he won the Potomac primaries. But he was unable to land the knockout blow as Clinton won in Ohio and won at least the primary part of the contest in Texas on March 4 and then took Pennsylvania on April 22. In recent weeks, the narrative had Obama on the defensive, enmeshed in controversies over his remarks about “bitter” voters and over the inflammatory words of his former pastor, Rev. Jeremiah Wright. (As recently as the week of April 28-May 4, the Wright-Obama relationship accounted for 42% of all campaign stories.)

But the May 6 primaries changed the story line. Even if the so-called split decision in Indiana and North Carolina was expected, many pundits and journalists concluded that Clinton’s path to the nomination had gone from daunting to nearly impossible. Part of this involved expectations. Some analysts had begun to wonder if Obama might be losing momentum and altitude. But his large margin in North Carolina and neck-and-neck finish in Indiana—which ran counter to what many late polls suggested—reinforced the sense that nothing fundamental had changed in the dynamic of a race he has led since February. Another factor in the media narrative was simply evaluating the numbers projecting forward. A key moment occurred when analysts such as NBC’s Chuck Todd concluded that even if Clinton were given the disputed totals in Michigan and Florida, she would still be behind in delegates and popular votes.

Looking more closely at the coverage last week, the single biggest component, at 9% of all the campaign stories studied, dealt with calls for Clinton to end her campaign. When you add that together with the superdelegate deliberations (7% of the coverage), the divided Democrats theme (4%), and continued questions about the fate of the Michigan and Florida delegations (2%), more than one in five campaign stories last week still highlighted the Democrats’ as-yet unhealed divisions. 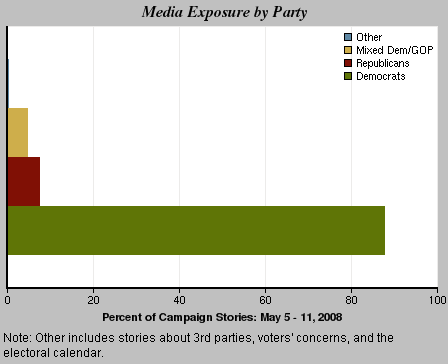 Overall, campaign coverage last week accounted for 46% of the newshole, as measured by PEJ’s News Coverage Index for May 5-11. That made it the biggest single week of election coverage since March 3-9, the week of the Ohio and Texas votes. In what is now a familiar pattern, cable news devoted the most attention (75% of the airtime studied) to the race with radio coming next at 56%. The campaign was the top story in four media sectors, but online, at 29%, it finished a close second behind the deadly Myanmar cyclone (31%).

The week of the North Carolina and Indiana showdowns began with the media highlighting a Clinton message that seemed successful in Ohio and Pennsylvania, one honed by public displays of whiskey drinking and public embraces of guns and hunting. “She has repackaged herself as a working-class hero,” said ABC’s Jake Tapper on that network’s election eve May 5 newscast. “Meet the new populist Hillary Clinton,” he added. “In this narrative, Obama is the elitist [and] the goal of course, is to win over the support of white, working class voters.”

One element of Clinton’s populist approach, her call for a gas-tax holiday that was vocally opposed by Obama, came in for serious criticism from economists and the media. And in the May 6 post-mortems, some analysts wondered if she had hurt herself politically with what columnist Charles Krauthammer called “a cheap gimmick.” 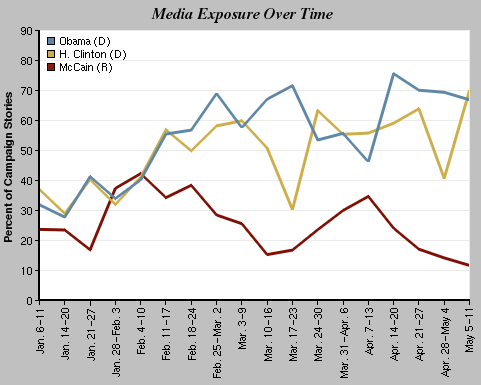 After the votes had been counted, the media verdict was almost unanimous. “Is it Over?” asked NBC Today host Matt Lauer as he opened his May 7 show. Sitting next to him, Tim Russert delivered the answer, saying “I cannot find an objective Democrat who does not think this race is over.”

That night’s CBS newscast began focusing on exit strategies for Clinton, with correspondent Jim Axelrod reporting that “several top advisers are suggesting that she stay in through West Virginia, Kentucky, Oregon and then, in two weeks, gracefully bow out.” In a companion piece, Jeff Greenfield wondered about the kind of “inducements that might persuade Clinton to step aside”—including offers ranging from paying off campaign debt to a major convention speaking role.

As the week wore on, with no sign of any major change of heart on the part of her campaign, the Clinton narrative began to emphasize her desire to keep fighting—at least for now. “Clinton says she’s still in it” was the headline on the May 8 Philadelphia Inquirer story reporting that she may have raised $1 million at a fundraiser the previous evening.

But at the same time, coverage of Obama indicated that he was beginning to move past the primary fight toward a November contest with McCain. One dustup that made headlines occurred when Obama accused McCain during a CNN interview of “losing his bearings.” The McCain camp fired back, saying that Obama—by using the phrase “losing his bearings”—was trying to make an issue of the candidate’s age. The Obama camp responded by blasting McCain for a strategy of “distract and attack.” This exchange, covered on the May 9 edition of Brit Hume’s Fox News Channel show, seemed to be ushering in a new post-primary phase in which Obama and McCain would be the main combatants and Clinton the bystander.

Although the campaign dominated coverage last week, the tragic Myanmar cyclone that has taken tens of thousands of lives finished second, at 15% of the newshole measured by the Project’s News Coverage Index for May 5-11. Next came stories about the troubled U.S. economy (5%), the issue of immigration (2%) and rising gas and oil prices (2%).

That made Myanmar one of the biggest non-campaign stories of the year so far. Only the Eliot Spitzer scandal (23% of the newshole), the Pope’s visit to the U.S. (16%) and two weeks of economic news (19% and 16%) attracted more attention than the Myanmar natural disaster when it came to coverage of something other than the 2008 election.