In a number of recent presidential campaigns, 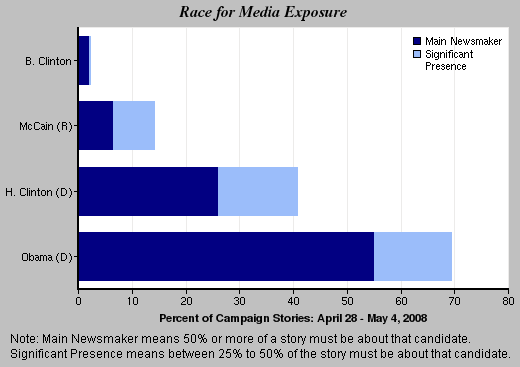 someone or something has emerged from obscurity to become a household word and an integral part of the media narrative. In the 1988 race it was a Massachusetts criminal named Willie Horton, and four years later, it was a former television reporter turned singer named Gennifer Flowers. In 2004, the name in the headlines was a group called Swift Boat Veterans for Truth. This year, at least so far, the newsmaker from nowhere is Chicago minister Jeremiah Wright.

Last week—as Wright re-emerged into full public view to speak to PBS’ Bill Moyers, the NAACP and the National Press Club—the controversy he generated made more news than both Hillary Clinton and John McCain. Clinton was a significant or dominant factor in 41% of the campaign stories and McCain registered in 14% of them. Meanwhile the relationship between Wright and his former parishioner Obama accounted for 42% of the week’s campaign coverage. Obama, who moved to decisively denounce Wright last week, was the significant or dominant newsmaker in 69% of the stories, according to PEJ’s News Coverage Index for April 28-May 4.

These coverage numbers are strikingly similar to those from March 17-23 when Wright’s inflammatory statements about race and the U.S. triggered the first Obama damage control effort, including a major March 18 speech on race relations. That week, the Wright-Obama story line accounted for 37% of the campaign stories and Obama dominated coverage at 72%. Clinton (at 30%) and McCain (17%) were virtual afterthoughts.

As the primary voting has slowed, the media have focused on a number of Democratic campaign controversies—from Clinton’s erroneous recollection about dodging snipers in Bosnia to Obama’s remarks about economically disadvantaged Americans being “bitter.” But none have had the staying power of the Wright flap. In the period from March 17 through May 4, the Wright-Obama story line made up 17%, or one out of six, of all the campaign stories studied. And last week saw the biggest spike yet in that coverage.

There were significant policy issues at play in last week’s Democratic campaign leading up to the May 6 primaries in North Carolina and Indiana. Clinton and Obama sparred over how to handle Iran and the proposed gas-tax holiday. The issue of gas prices accounted for the second-biggest category of campaign stories last week at 7%. And the next biggest chunk of campaign coverage, at 5%, was Indiana superdelegate and former Democratic National Committee chair Joe Andrew switching his support from Clinton to Obama.

But even after combining the gas and the Andrew coverage, that is less than one-third of the attention paid last week to Wright. 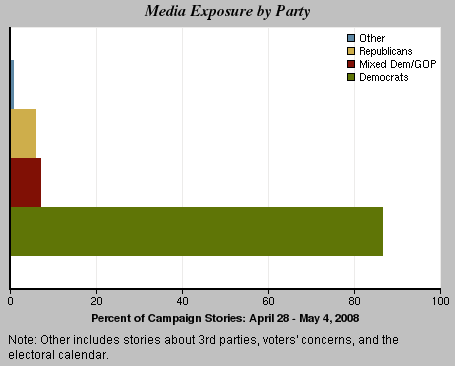 Overall, the presidential campaign accounted for 38% of the newshole in print, online, radio and television, as measured by PEJ’s News Coverage Index for April 28-May 4. Once again it was cable television, with its insatiable appetite for election news and speculation that far outstripped any other media sector in coverage. The 70% of the cable airtime devoted to the campaign last week almost equaled the combined campaign newshole numbers for network TV (27%), online (22%) and in newspapers (22%).

As it ricocheted throughout the week, the Wright story struck numerous angles in the press coverage. What were Wright’s motives for potentially damaging the candidacy of a man he supports? How much political damage has been done? Was Obama’s denunciation sufficient? And then, as is almost always the case with a mega-story, the media’s role itself became an issue.

After airing footage of Wright’s aggressive defense of himself at the National Press Club on his April 28 show, CNN’s Anderson Cooper—who dubbed the controversy “Hurricane Jeremiah”—mused that “for a guy who supports Barack Obama, he couldn’t be doing any more damage to his candidate, could he?” 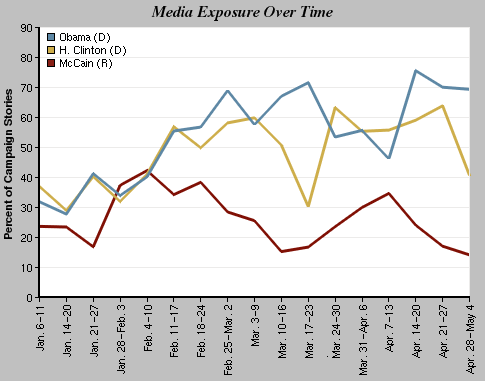 The next night, on the CBS newscast, the subject was Obama’s denunciation of Wright, a far stronger response than what Obama delivered in his March 18 speech on race. That speech was praised for its nuance. This response was covered in more purely political terms. “Barack Obama shifted today into major damage control, all but severing his ties to the pastor he once defended,” declared anchor Katie Couric, while correspondent Dean Reynolds noted that Wright’s words had put the Obama campaign in a “defensive crouch.”

On the May 1 edition of NPR’s “Morning Edition,” correspondent David Schaper canvassed voters in Hammond Indiana and found a variety of reactions. A retired roofer who supports Obama called Wright a “jerk” who may have damaged his candidate’s chances. An undecided retired steelworker said Wright’s words were making it harder for him to choose Obama. A former union president supporting Clinton declared that Wright’s views “had to sink in” on Obama during his 20 years in the church. But a retired steelworker, and Republican who is supporting Obama, asserted that a candidate should not be judged by his pastor.

The next day, on May 2, the Times sampled sentiment from the second battleground state—getting reaction from black churches in North Carolina. There were various crosscurrents ranging from sympathy for Wright to offense at his remarks to something in between.

“There’s some truth to the things Reverend Wright spoke about. And the Bible says the truth shall set you free,” one associate pastor told the paper. “But the Bible also says there is a time to speak and a time to be silent.”

Aside from the campaign last week, news of the U.S. economy—driven last week by another interest rate cut and reports of very slow growth—was the second-biggest story, filling 10% of the newshole as measured by PEJ’s News Coverage Index. (In the first four months of the 2008, the troubled economy has been the No. 2 story, averaging 7% of the newshole per week) That was followed by events inside Iraq (3%) coverage of gas and oil prices (3%) and concerns about a global food shortage (2%).