The week began with Barack Obama and Hillary Clinton 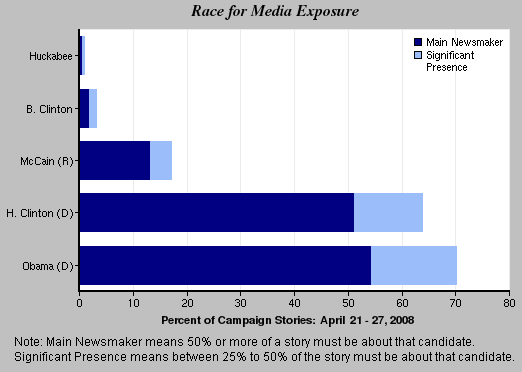 bashing each other with negative TV ads on the eve of the Pennsylvania primary. It ended with the prospect of a longer, tougher contest after Clinton’s win, and with the volatile issue of race again occupying a prominent place in the media narrative.

Given that the coverage of the crucial April 22 Pennsylvania vote accounted for 53% of all the campaign stories, last week’s election news was utterly dominated by the Democrats. Obama was a dominant or significant newsmaker in 70% of the campaign stories, according to PEJ’s Campaign Coverage Index for April 21-27. Clinton was close behind at 64%, generating her highest level of media attention this year. (Bill Clinton accounted for another 3%).

In one sign of what was at stake for Democrats in Pennsylvania, a post-primary spin war erupted over Clinton’s actual margin of victory—and whether it reached the magic double-digit mark some pundits set as the yardstick for a big win for her. On April 23, a Huffington Post blogger wrote that “The official results for last night’s debate as of 12 noon Eastern time are: Hillary Clinton – 1,258,278 (54.7 percent) Barack Obama – 1,042,573 (45.3 percent)…When you subtract 45.3 from 54.7 you get 9.4.The last time I checked my use of statistical analysis, 9.4 isn’t 10…So, why is the mainstream media reporting that Hillary won by "double digits?”

As the week rolled on, the Pennsylvania results spawned another story line: How big a factor is race playing in Obama’s problems with blue-collar Democrats? The recurring racial angle in this campaign was also rekindled by the resurfacing of Obama’s controversial former pastor, Rev. Jeremiah Wright, whose interview with PBS host Bill Moyers quickly circulated throughout the media, making him a significant or dominant factor in 7% of the coverage.

John McCain embarked on a tour of economically hard-hit areas of the nation last week and made some news with his harsh criticism of the government’s response to Hurricane Katrina. But overshadowed by events in Pennsylvania, McCain’s coverage continued its recent downward trajectory, dropping to 17% from 24% the previous week and from 35% the week of April 7-13.

Despite McCain’s struggle for attention, coverage of the campaign filled 44% of the newshole as measured by PEJ’s News Coverage Index for April 21-27. That marked the highest level of weekly coverage since March 3-9, the period that included the key primary contests in Ohio and Texas. Once again, cable was the media sector that devoted the greatest proportion of its newshole—in this case 74% of the airtime studied—to the campaign. To illustrate how completely the race for the White House drove the media agenda last week, the second-biggest story—the troubled U.S. economy —accounted for only 4% of the overall newshole. 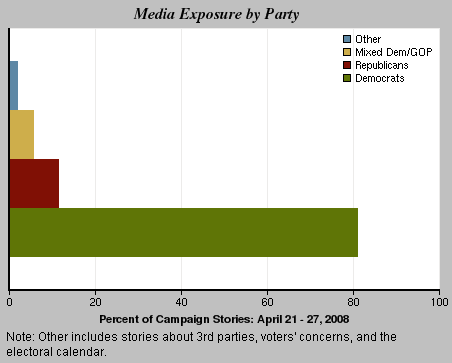 In the tactical analysis of the Pennsylvania vote—or what MSNBC dubbed “Spinnsylvania” –three main storylines emerged, different in tone but not mutually exclusive. One was enunciated on MSNBC when political director Chuck Todd declared that in the crucial delegate count, “nothing really changed at all…the pledged delegate count is going to be Obama’s.” Another one, more favorable to Clinton was in an AP story on Google News that asked, “Why can’t Obama close the deal? It’s a question Hillary Clinton and her surrogates raised throughout the last days of the caustic Pennsylvania primary contest.” A third theme, that of a continuing bloody primary struggle, was embedded in this headline in the April 24 Washington Post: “Continuing Battle Divides Democrats: Leaders to Seek End After Primaries to Avoid Further Damage.”

Another narrative that also surfaced after Pennsylvania was the extent to which race played a role in the vote. Citing such statistics as Clinton’s level of support (75%) among the 13% of white Pennsylvania voters who said race was an important factor, ABC News national correspondent Claire Shipman said some numbers do “suggest what nobody really wants to think—that race may be an issue.” The racial temperature heated up further when African-American Congressman James Clyburn, an uncommitted super delegate, gave the New York Times an April 24 interview. In it, he called Bill Clinton’s campaign conduct “bizarre” and said many blacks were convinced the Clintons were trying to “damage Obama to a point that he could never win.” 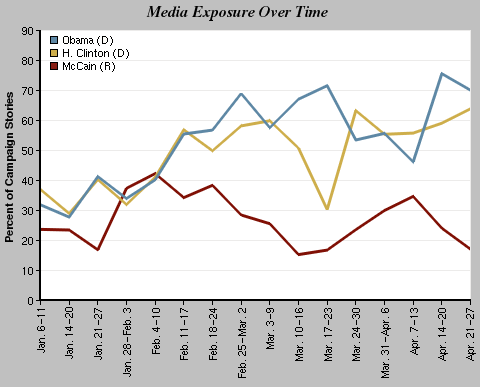 At the same time, Rev. Wright, whose inflammatory remarks about race and the U.S. have dogged the Obama campaign, raised his public profile dramatically last week—giving the PBS an interview before speaking to the NAACP and at the National Press Club. By April 24, the PBS excerpts had been widely disseminated. Assessing the reappearance of the pastor in political terms for the Obama campaign, the April 25 Washington Times went with the headline, “Wright response at the wrong time?”

Presumptive GOP nominee John McCain made some news of his own last week by blasting the response of the Bush administration to Hurricane Katrina. In an April 24 PBS NewsHour story on his tour of the still battered Ninth Ward in New Orleans, anchor Ray Suarez reported on McCain’s statement that had he been President , “he would have landed his plane immediately to survey the damage.” Even with that tough critique of President Bush, McCain found it hard to break through the din of Pennsylvania.

Last week, the drop-off between campaign coverage and the rest of the news menu was dramatic. The second biggest story, at only 4% of the newshole, was the troubled U.S. economy. The continued fallout from the raid on the Texas polygamist compound was next at 3%. Growing fears of a global food shortage driven by rising prices followed at 3% and a related subject—skyrocketing oil and gas prices—rounded out the top-five story list at 2% of the newshole.