Barack Obama attracted the most coverage 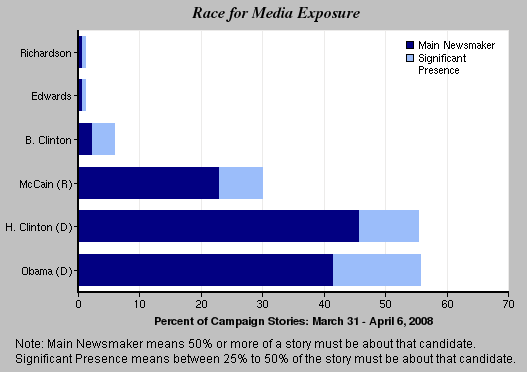 of any presidential hopeful last week, and John McCain’s biographical tour helped him climb back into the headlines. But it was Hillary Clinton who generated the clearest story line in the media last week in advance of the April 22 Pennsylvania primary.

The narrative was the debate over whether it might be time for Clinton to throw in the towel in the nomination fight. It was the single biggest campaign story line, accounting for 7% of all the campaign stories last week, and it was big enough that Clinton herself fought back by embracing one of Philly’s fictional favorites. The indomitable Rocky Balboa not only withstood the hardest blows of Ivan Drago and Clubber Lang, he managed to battle his way through five sequels to the 1976 Oscar-winning film.

“Let me tell you something, when it comes to finishing a fight, Rocky and I have a lot in common,” said Clinton. “I never quit.”

Clinton wasn’t the No. 1 campaign newsmaker last week. Overall, she was a significant or dominant factor in 55% of the campaign stories studied last week in PEJ’s Campaign Coverage Index, narrowly trailing Obama, at 56%. But much of that news for the former First Lady wasn’t good. Among the story topics that got picked up, March tallies showed Obama outraising her $40 million to $20 million. He also gained some key endorsements, including that of 9/11 Commission vice-chairman Lee Hamilton and ex-President Jimmy Carter, who offered (very) thinly veiled support. And Obama continued to hold a lead over Clinton in national polling while cutting into her advantage in Pennsylvania.

It wasn’t all good news for Obama, however. His Keystone State campaign included an ill-fated bowling exhibition in which he rolled a 37 in 7 frames—and average of 2.6 pins per ball. Despite that pitiful outcome, the bowling escapade fit the Obama story line last week, which focused on his decision to move away from high-tone set speeches in large settings in favor of doing more small-bore, personalized campaigning.

For both candidates, the coverage included some scandal hangover. The media fallout over Obama pastor Jeremiah Wright’s incendiary sermons—which accounted for 37% of campaign coverage the week of March 17-23—still got some coverage but was down to 5% last week. And while Clinton’s mistaken recollection about dodging sniper fire during a 1996 trip to Bosnia accounted for 14% of the coverage two weeks ago, the flap faded to 2%.

Meanwhile, presumptive GOP nominee McCain racked up his highest level of coverage since the week of Feb. 18-24. McCain was significant or dominant factor in 30% of the campaign stories studied last week.

One vehicle for generating that attention was the tour of significant places from McCain’s past, which was designed to re-introduce him to voters and focus attention on his heroic biography. 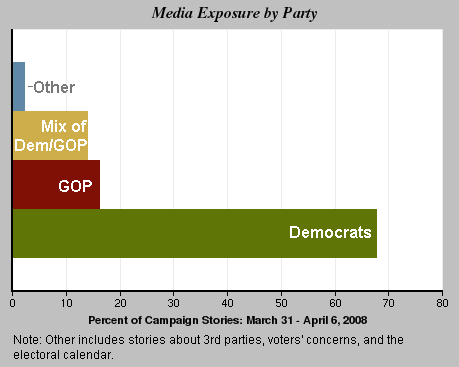 There’s been debate about whether the press’s inattention to McCain and fixation on the Clinton-Obama fight has been a boon or blow to the GOP likely nominee. On his April 1 MSNBC program, Dan Abrams made his feelings clear, labeling McCain “Teflon John” and declaring that a preoccupied media “continue to give McCain pretty much a free ride.”

Overall, the Presidential race was the top story, accounting for 32% of all the coverage measured by PEJ’s News Coverage Index for March 31-April 6. But with a break in the primary schedule and election coverage easing off somewhat in recent weeks, a disparity has emerged among media sectors. Last week, the campaign was the No. 2 story both on newspaper front pages (where it filled 13% of the newshole) and online (at 14%). Instead, the coverage now is really being driven by cable (62%) and radio (46%), where the talk show/talking head culture in both platforms is focused on chewing over whatever the latest campaign controversy may be.

For much of last week, Clinton was in “Rocky” mode, vowing to keep on despite being behind on the scorecards. In a March 31 Good Morning America story, Jake Tapper reported that the Clinton campaign had amassed almost $9 million in unpaid debts to vendors and was sparking fears among some party officials that her only path to victory involved “destroying Barack Obama.” Still, as Tapper noted, “Senator Clinton has a message for all those Democrats pushing her towards the exit. She ain’t goin’ anywhere.” The next day, MSNBC’s Abrams, in keeping with the pugilistic metaphors, acknowledged Clinton’s desire to fight on, but added, “It sure feels like the referee, Democratic Party chairman Howard Dean, wants to call the fight early.” 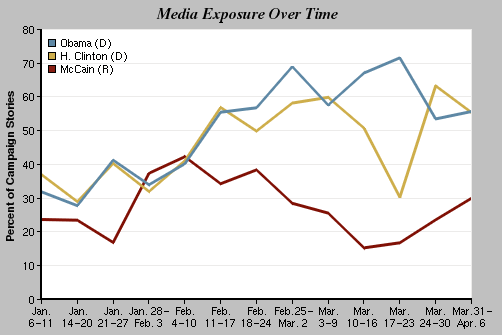 While no candidate wants a constant barrage of stories suggesting the end is near, Clinton’s very public defiance of calls for her withdrawal seem to work as a way of stirring her supporters and perhaps bolstering her own resolve. The Good Morning America story caught the crowd behind Clinton chanting “no, no, no” as she dismissed calls for the contest to end.

Near the end of the week, the Clintons did change the subject by going public on April 4 with their long-awaited tax filings. The fact that they had earned $109 million in eight years was both impressive and perhaps a little awkward for a candidate who has made the beleaguered blue-collar working-class the centerpiece of her campaign. An April 5 New York Times story seemed to allude to this when it reported on a Clinton speech in North Dakota attacking George Bush’s tax cuts for favoring the rich.

“My husband, much to my surprise and his, has made a lot of money since he left the White House, by doing what he loves doing most—talking to people,” the Times quoted Clinton as saying. “But we didn’t ask for George Bush’s tax cuts. We didn’t want them and we didn’t need them.”

The Obama media narrative was relatively uneventful last week, except perhaps, for the parade of gutter balls in Altoona. Airing the video on his March 31 Hardball show, MSNBC’s Chris Matthews provided the play-by-play, studying Obama’s delivery and declaring, “Look at this. This isn’t exactly the right form.”

A chunk of the coverage was devoted to the changes in style and rhetoric that Obama adopted in Pennsylvania, a state teeming with the older white working-class voters that he has trouble reaching. A New York Times story posted on MSNBC.com on April 1 reported that Obama “is grounding his lofty rhetoric in the more prosaic language of white-working-class discontent, adjusting it to the less welcoming terrain of Pennsylvania. His preferred communication now is the town-hall-style meeting.”

That theme was also featured in an April 3 Philadelphia Inquirer story that began by reporting that Obama had “sipped a Yuengling in Latrobe; fiddled with a Slinky in Johnstown…fed a calf in State College…and nibbled on cheese at Philadelphia’s Italian Market.” It was part of a six-day tour across the state credited with helping to cut Clinton’s lead there from about 16 points to single digits. But the story did mention that Obama visited a market and tried a Spanish ham that sold for $99.99 a pound, a delicacy no doubt beyond the reach of many voters.

John McCain tried to create his own story with his “Service to America” tour last week. But he wasn’t in total control of the narrative. ABC’s March 31 evening newscast made note of his visit to a Mississippi where he was a naval flight instructor, but anchor Charles Gibson called it a “carefully orchestrated campaign swing.” And the brief McCain piece came after a much longer look at the Democratic fight in Pennsylvania.

An April 2 story in the Arkansas Democrat Gazette on McCain’s strategy recounted his visit back to his old Alexandria Virginia boarding school where he was nicknamed, among other things, “Punk” and “McNasty.”

On his April 1 program, CNN’s Lou Dobbs, illustrated the difficulties McCain still faces in getting the public to focus on his candidacy. After a long discussion of the Obama-Clinton race, Dobbs introduced a segment on McCain’s campaign by declaring, “Senator McCain…Yes, the Republican is actually in this race as well.”

After the campaign, the No. 2 story, according to last week’s News Coverage Index, was the troubled U.S. economy at 9% of the newshole. Fueled by the Treasury’s Department proposal for a sweeping overhaul of regulatory powers and Federal Reserve Chairman Ben Bernanke’s use of the R-word (Recession), the economy was the No. 1 story online and in newspapers, at 14% of the newshole. That was followed by events on the ground in Iraq (5%), which dropped from 12% the previous week. The contested elections in Zimbabwe were next at 3%, while remembrances of Martin Luther King surrounding the 40th anniversary of his murder followed behind, also at 3%.