In the seemingly stalemated race for the Democratic nomination, 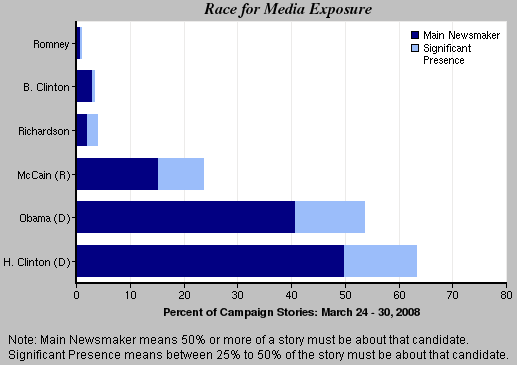 there seems to be a clear relationship recently between the level of coverage for a presidential candidate and the tone. And the recent campaign media narratives strongly suggest that, at the moment, bad news is big news.

Last week it was Hillary Clinton’s turn to be examined in the media’s stare. The fallout from her oft-repeated story about encountering sniper fire during a 1996 trip to Bosnia, and the later acknowledgement that she “misspoke,” helped make Clinton the leading campaign newsmaker of the week. As measured by PEJ’s Campaign Coverage Index March 24-30, she was a significant or dominant factor in 63% of the week’s campaign stories. Rival candidate Barack Obama trailed at 54%.

That marks a major turnaround from the previous week when 72% of the stories were significantly or predominantly about Obama, and Clinton lagged far behind at 30%. Then it was Obama on the hot seat as he delivered a high-stakes March 18 speech designed to minimize the political damaged cause by the widely circulated and inflammatory remarks of his pastor, Rev. Jeremiah Wright.

Obama was still dealing with the Wright flap last week, but it had subsided noticeably, and what there was more than matched by Clinton and the Bosnia dustup, which accounted for 14% of the week’s campaign stories.

Once again, the still-contested Democratic race dominated the media’s attention, generating about six times the number of stories as the Republicans. But much of the news was negative. And the subtext never far from the surface was the increasing bad blood between the Obama and Clinton camps. That included a Bill Clinton remark that Obama’s campaign interpreted as questioning his patriotism and James Carville’s comparison of Bill Richardson—who had endorsed Obama—to Judas Iscariot. As the week went on, Democrats’ mounting fears of a self-destructive primary battle led to some stories featuring calls for Clinton to leave the race.

On the others side of the aisle, John McCain, who picked up the endorsement of Nancy Reagan last week, saw his coverage move up to 24% from 17% the previous week. But that still amounted to less than half of Obama’s or Clinton’s coverage, something some observers see as a boon to the presumptive GOP nominee.

“Is John McCain getting a free ride because of the intense spotlight on the Obama-Clinton campaign?” asked Chris Matthews on his March 25 program. Perhaps, he added, McCain’s support for an unpopular Iraq war would be getting more attention “if the Democrats weren’t tearing each other apart.”

Last week, the 2008 campaign filled 34% of the overall newshole, as measured by PEJ’s News Coverage Index from March 24-30. Though still accounting more than one-third of all the news examined, that represents the second lowest weekly coverage level since the primary season began in January. Once again, cable television, which devoted 62% of its airtime to the campaign, decisively outstripped any other media sector in the intensity of coverage. 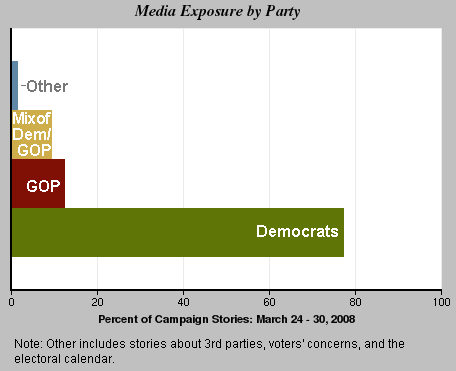 One turning point in last week’s media narrative came when Clinton admitted being wrong about her claims of Bosnia sniper fire, an account contradicted by video showing her landing without incident and being greeted by a child. The March 25 CBS Evening News highlighted Clinton’s problem by airing footage from several occasions when she talked of her dangerous arrival in Bosnia. Noting that the CBS video of the actual event was the most viewed item on YouTube in the past 24 hours, anchor Harry Smith asked this damning question: “In the end, doesn’t this really come down to a matter of ‘can you trust what she says?’”

That same day, AOL News posted an Associated Press story on the sniper snafu and included an online poll question asking people whether they thought Clinton exaggerated her experience a lot, a little, or not at all.

One of the reasons Rev. Wright stayed in the news last week was because Clinton broke her silence on the matter to declare that he would not have been her pastor. In a March 26 Good Morning America report, correspondent Jake Tapper noted that “Clinton went for the jugular [on Wright], for the first time personally injecting him into the race” after she had “been on the ropes” over the Bosnia story.

As the Wright issue continued to percolate, Obama again addressed their relationship in a March 28 appearance on ABC’s program, The View. Obama stated he would have left the church “had the reverend not retired and had he not acknowledged that what he had said had deeply offended people and were inappropriate…” The Wright saga, in all its incarnations, accounted for 11% of the campaign stories last week, down considerably from 37% the previous week. 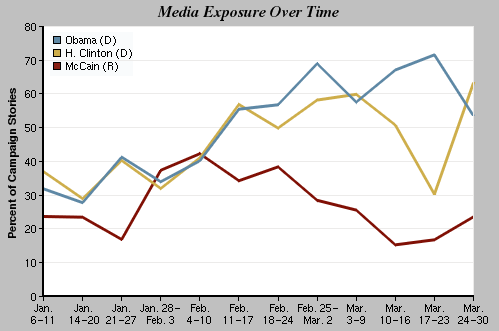 But tales of bitter Clinton-Obama infighting continued to make news. Carville and Richardson battled over Carville’s characterization of the New Mexico Governor as Judas. Bill Clinton’s statement that a McCain-Clinton general election would feature two people who “loved this country,” struck the Obama camp as an insult to his patriotism and triggered a rebuttal from Obama advisor Gen. Merrill McPeak comparing the former President with Joseph McCarthy.

On his March 24 Fox News Channel Show, Bill O’Reilly summed up the situation by saying, “Governor Richardson is Judas, Obama might not love the USA and President Clinton is Joe McCarthy. And all of that is Democrat against Democrat.”

Against that backdrop came a March 27 Boston Globe story reporting that, “More party leaders are saying that the increasingly personal crossfire between the Hillary Clinton and Barack Obama campaigns serves only to write the script for Republican ads in the fall and to give John McCain, the presumptive GOP nominee, a head start in framing his candidacy.”

Given some louder rumblings about pressuring Clinton to abandon the race, and after Democratic National Committee Chair Howard Dean called for a July 1 end to the nomination battle, the week ended with yet another twist in the story line—one that suggested the fight was far from over and possibly foreshadowing the days ahead.

“Clinton Vows To Stay in Race To Convention,” was the headline on the March 30 front-page story in The Washington Post.

While generating only about one-third as much coverage as the campaign, the situation inside Iraq filled 12% of the newshole last week, according to PEJ’s News Coverage Index. (That is three times more coverage than events in Iraq had received in any other week in 2008.) Between the grim milestone of 4,000 U.S. military deaths and the flare-up of the fighting around Basra, Iraq bloodshed virtually tied the campaign as the No. 1 story in the newspaper sector and filled 20% of the newshole online. The war was followed by the troubled U.S. economy (7%), relations with China (3%), which was driven by the Tibetan upheaval, and the Iraq policy debate (3%),