It was, to put it simply, the week of “the speech.” 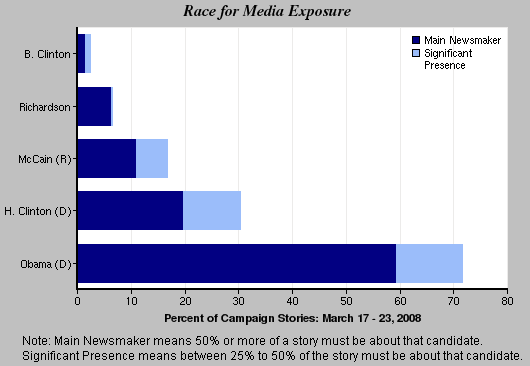 The 37-minute address on race delivered by Barack Obama March 18 at Philadelphia’s Constitution Center dominated last week’s campaign narrative in the press. While the subject was race relations in America, there were so many subtexts it was hard for the press to know where to begin. First, there was the broader context of political damage control. There was also the fate of the battle for the Democratic nomination. But perhaps the most intriguing element was watching the media culture try to deal with a speech that was so complex it defied the TV panel debate, the skills of the veteran political writer or the parameters of a 90-second nightly news segment.

The numbers alone tell much of the tale. First, Obama utterly dominated the media narrative. He was a significant or dominant figure in 72% of last week’s campaign coverage. That was more than twice as many stories as Hillary Clinton, at 30%. Not only was it Obama’s highest coverage level in 2008, it was Clinton’s lowest since mid-January, when both parties still had multi-candidate presidential fields. And that was despite last week’s much-anticipated National Archives release of thousands of pages of records of Clinton’s activities as First Lady.

Despite presumptive GOP nominee John McCain’s high-profile Mideast mission to burnish his national security credentials, that trip played second fiddle to the Wright controversy as well. McCain registered at only 17% of the campaign coverage as Democrats generated almost 12 times the media attention as Republicans did last week.

Obama was forced to give the address after almost a week of the media running video clips featuring racially inflammatory and anti-American rhetoric of the candidate’s long-time pastor, Rev. Jeremiah Wright.

To what extent did Obama get in front of the Wright controversy? To some degree, Obama was able to move Wright off center stage by injecting himself into the matter. For instance, Wright was a lead newsmaker in 7% of the campaign stories last week, far fewer than Obama.

But the two men were inextricably linked. More than a third (37%) of the week’s campaign stories focused on the Obama/Wright relationship and its fallout. By contrast, the dilemma over what to do with Florida’s and Michigan’s early-voting primary contests accounted for 11% of the week’s election stories.

But at least the subject had moved on some. The high-risk Philadelphia speech came after several days of what one network correspondent described as Obama “damage control” to try and counter political fallout from the Wright sermons. His mission, as enunciated by ABC’s Charles Gibson on his March 17 newscast, was to walk “the fine line…as he embraces his religion while trying to distance himself from the fiery pastor of his Chicago church.” Aside from those who saw it live on cable or watched or read excerpts, the speech was also viewed about 2.5 million times on YouTube in the first 72 hours after it was delivered, according to media reports. 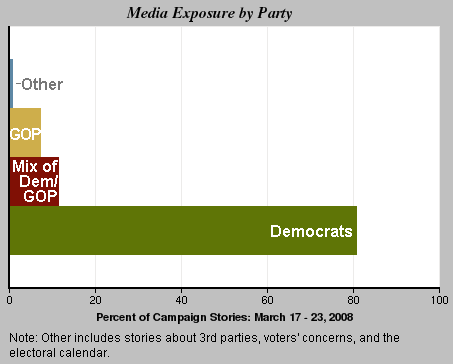 The controversy also elevated the campaign in the news again. Driven by the Wright/Obama drama, the presidential race had a coverage comeback last week, filling 39% of the newshole as measured by PEJ’s News Coverage Index from March 17-23. (The previous week, the campaign had dropped to 27% of the coverage studied, the 2008 low-water mark.)

One clear indicator of how much fodder the Wright controversy provided for the pundits and partisans was in the media sector breakdown of coverage. Campaign coverage filled 29% of the network newshole, 23% of the online newshole, and 16% of the front page newspaper space. But it accounted for 73% of the airtime on cable and 53% on radio, the two sectors that include a heavy diet of political talk shows.

As soon as Obama finished his March 18 speech—one delivered against the backdrop of eight American flags—the media shifted into reaction mode. Yet the speech was so intricate and challenging, it wasn’t clear they knew how to react. That night, for instance, NBC anchor Brian Williams called it “the most important speech of his presidential campaign,” followed by two commentators. MSNBC host Joe Scarborough said the speech “made history.” The Washington Post’s Jonathan Capehart called it a “very blunt, very honest, very open speech.” But neither was sure it would repair the political damage done by Wright’s divisive words. 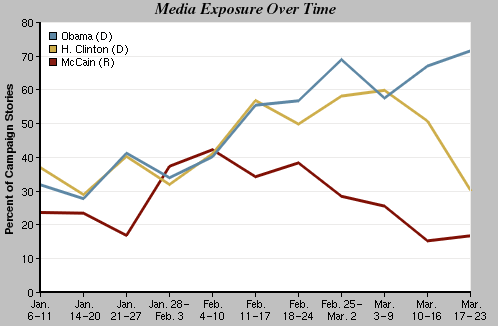 Other pundits tried to parse the speech on several levels—responding to the quality of the words and thoughts while also trying to gauge their political impact. Yet even the most nuanced weren’t sure how it would eventually play out. On the March 19 edition of ABC’s Good Morning America, George Stephanopoulos called it “sophisticated” and “eloquent,” before venturing that it “reassured” Obama’s liberal base and may have “helped” with super delegates, but would likely prove a “harder sell” with white working-class voters.

The next day, the Washington Post’s Howard Kurtz collected the media post-mortems across the ideological scale, concluding that “the reaction on the left and right sometimes made me wonder whether these pundits were watching the same speech. The only point of agreement I found is skepticism that it will help Obama with white, working-class voters, sometimes short-handed as Reagan Democrats.”

On March 21, the Boston Globe surveyed citizens in the upcoming primary states of Pennsylvania and Indiana and found mixed views. “He showed his character,” said one Indiana woman of Obama. “America needs to take its blinders off. The country is still prejudiced.” Meanwhile a Philadelphia bartender turned the TV off for Obama’s speech, dismayed that the candidate hadn’t broken more decisively from Wright. “If he said at the beginning, “I disagree, I’ll leave the congregation’…it would be over with and go away,” the man said.

As the week ended, there was one more turn in the story line when New Mexico Governor and former Democratic presidential hopeful Bill Richardson—despite a close relationship with Bill and Hillary Clinton—endorsed Obama on March 21.

A March 21 Associated Press story posted on Yahoo News! suggested how timely Richardson’s decision was for the Obama camp, coming as he “leads among delegates selected at primaries and caucuses but with national public opinion polling showing Sen. Hillary Rodham Clinton pulling ahead of him amid controversy over statements by his former pastor.”

In fact, daily national Gallup Polls showed Clinton moving out to a seven-point lead over Obama among Democrats earlier last week, with Obama then regaining a three-point lead over Clinton by the weekend. That led some pundits to conclude (or maybe simply guess) that the Wright affair had hurt Obama and the speech—and perhaps the Richardson endorsement—had repaired some of that damage. Others thought it would be some time before the full and real impact of the Wright affair, and the subsequent “speech,” would make itself known.

While the election story again dominated, coverage of the economy reached its second highest level in 2008, filling 16% of the newshole in a week that saw another Federal Reserve rate cut, a single-day 420-point rally on Wall Street and the buyout of troubled investment bank Bear Stearns. (The economy was the top story in the newspaper sector at 25%.) From there, it was a big falloff to the third-biggest story, China (5%), which was driven by the protests and violence in Tibet. That was followed by the Iraq policy debate (5%), in the news largely because of the fifth-anniversary of the war to oust Saddam Hussein. The deadly Midwest storms were next at 4% of the newshole.

First a Speech, then an Uprising, Dominate the News