After weeks of focusing on the prospect of a deadlocked 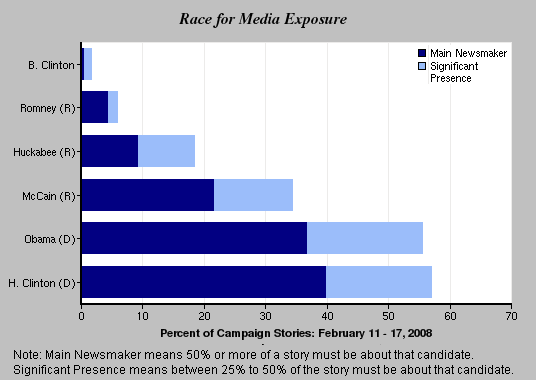 race with no end in sight, the media narrative for the Democratic presidential race shifted dramatically last week, anointing a definite frontrunner and an underdog.

In a week in which the Democratic candidates thoroughly dominated campaign coverage, Hillary Clinton barely edged Barack Obama in the competition for exposure. But in the period of Feb. 11-17—which included three resounding Clinton losses in Virginia, Maryland and Washington D.C.—the media raised serious questions about her campaign’s capabilities and her viability. (In some corners of the punditocracy unfriendly to Clinton, her political obit was being prepared.)

Conversely, Obama—who ran his post-Super Tuesday winning streak to eight states with the Feb. 12 “Potomac Primary” and established a delegate lead—rode a wave of positive coverage, depicting him with a real, if not decisive advantage. Obama was a significant or dominant factor in 55.5% of the week’s campaign coverage compared to 57% for Clinton—the highest level of coverage for both since the Campaign Coverage Index began five weeks ago. But when it came to the tone of that coverage, he was a big winner.

Here’s one symbolic illustration of those divergent narratives. The front-page Feb. 11 USA Today story began with the news that Clinton team, after a series of primary and caucus defeats, had replaced campaign manager Patti Solis Doyle. The next day, ABC’s Good Morning America reported that the famed wax museum, Madame Tussauds, had just unveiled a statue of Obama standing in the Oval Office of the White House. (A Clinton statue had been created a year ago. But in politics, timing and momentum are everything.)

While there’s been little drama on the GOP side since Super Tuesday, John McCain, the presumptive nominee, registered at 34% of the coverage last week. An endorsement from Mitt Romney and wins in Washington D.C., Maryland and Virginia, did not put a stop to stories questioning McCain’s appeal to conservatives. But he is now so far ahead in the race for delegates that remaining challenger Mike Huckabee faced growing questions about his motives for continuing. At 18%, Huckabee had a substantial week of coverage. But after being lauded as the surprise winner of the Feb. 5 Super Tuesday contests, he was depicted last week someone on an increasingly quixotic quest.

With the Republican outcome a formality, coverage overwhelming went the other way last week, with 60% of the campaign stories mostly about Democrats and only 24% primarily involving the GOP. Romney’s endorsement of McCain helped make the former Massachusetts Governor a significant or dominant newsmaker in 6% of that Republican coverage.

Even in a crowded news week, the 2008 campaign dominated the news agenda, filling 40% of the newshole from Feb. 11-17, as measured by PEJ’s News Coverage Index. Once again, cable television (at 62%) devoted the most attention to the story, with radio next at 46%.

At the outset of last week, the media focus was on a troubled Clinton candidacy. “It was a clean sweep this weekend for Barack Obama,” said correspondent Andrea Mitchell on NBC’s Today show, referring to Obama wins in Nebraska, Louisiana, Washington and Maine. “This while Hillary Clinton changes her campaign manager and hopes to stop Obama’s momentum in big primaries to come in March.” After Obama’s impressive showing on Feb. 12, the story was not simply that he won, but that he did so by making serious inroads into Clinton’s base.

“Memo to Hillary Rodham Clinton: Barack Obama is stealing your faithful,” was the opening paragraph in an AP story posted Feb. 13 on MSNBC.com that credited Obama with doing better among whites, women and the elderly—voters “who form the core of Clinton’s political base.”

The news didn’t improve for Clinton who also had to deal with speculation about the loss of some of her Superdelegates. In a Feb. 15 report on CBS’s newscast, Katie Couric noted that “a chill went through Hillary Clinton’s campaign today,” with news that Georgia Congressman John Lewis might be switching his support from Clinton to Obama. While explaining that Lewis’s intentions weren’t clear, correspondent Dean Reynolds said that the possible erosion of Superdelegates is “at the very least…a worrisome development for Senator Clinton at a time when she’s trying to fight back from a series of damaging defeats.”

If Clinton appeared to be teetering on the edge of disaster, Obama was savoring his press clips last week. An AP story posted on Yahoo.com on Feb. 11 illustrated just how well things were going. “Barack Obama could hardly have had a better weekend,” said the story, referring to his weekend wins ahead of the Potomac Primary. “For a cherry on top, he won a Grammy award Sunday, beating former president Bill Clinton and others for ‘best spoken word album,’ for the audio version of his book, ‘The Audacity of Hope.’” In one of many stories about Obama’s “momentum” in the campaign, former Clinton advisor James Carville told CNN that unless Clinton wins in Texas, Ohio and Pennsylvania, “then Senator Obama is gonna probably be the nominee. That’s a fact.”

On Feb. 14, CBS’ Early Show aired a piece examining the power of Obama’s appeal with voters. “With soaring rhetoric, Obama is moving his audiences not just politically, but emotionally,” declared correspondent Tracy Smith. “The stoic eloquence channels John F. Kennedy.” It was the kind of story that has some Clinton supporters complaining about a pro-Obama press bias.

For McCain, his battle to win over reluctant conservatives continues to be a main thread in a media narrative that has him as the nominee-in-waiting. On the Feb. 12 edition of CNN’s Situation Room, correspondent Dana Bash reported that in a meeting with other GOP Senators, McCain offered the message “that he hopes his colleagues on the Republican side are behind him. He hopes to unite the party behind him. But he knows he has a lot of work to do.’” But even as McCain faces that nagging issue, he benefited from the increasing perception in the media that the Huckabee campaign is now only a symbolic effort.

In a discussion on CBS’ “Early Show,” host Harry Smith asked his guest about what he called “this lingering Huckabee thing.” Whatever Smith’s intent, when a presidential campaign is described as a “lingering…thing,” it’s a sure sign the media see it on life support.

Next to the campaign, the biggest-story last week was domestic terrorism, (at 6% of the newshole), a subject driven largely by the dispute between the Congress and White House over a new surveillance bill. That was followed by continuing problems with the U.S. economy (6%), and the Northern Illinois University shooting rampage (5%) that left six dead, including the killer. Rounding out the top-five list last week was that rare sports story that makes the front pages. Roger Clemens’ defiant, dramatic and some might say dubious testimony before Congress helped baseball’s steroid scandal fill 5% of the newshole last week.