The media’s coverage of the campaign 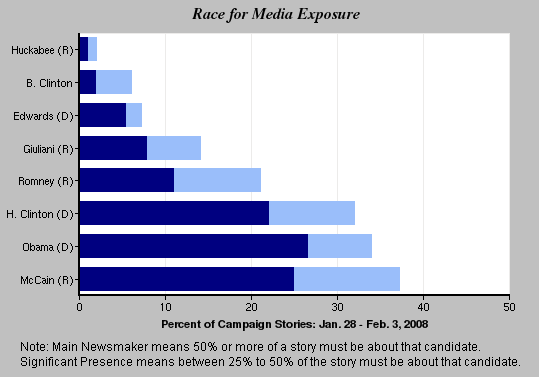 last week seemed to reflect a growing consensus that the Republican and Democratic nomination fights were moving along two distinctly different trajectories.

With Florida winner John McCain getting about 75% more coverage than Mitt Romney, and with Mike Huckabee almost invisible, the press appeared conspicuously close to turning McCain into the presumptive nominee last week. In that Jan. 28-Feb. 3 period, which ran from the day before the Florida primary to two days before Super Tuesday, McCain generated more coverage than any candidate. And that coverage suggested a media “tiering” of the race, with McCain a heavy favorite over several also-rans. McCain had not necessarily put Mitt Romney away, but the press nearly had.

On the Democratic side—where Barack Obama and Hillary Clinton were virtually equal in media attention for the third consecutive week—the tone and level of coverage anticipated a long and intense battle. The message here, which began two days after Obama’s victory in South Carolina, was that there would be no verdict soon. And for the second week in a row a non-candidate (this time, Massachusetts Senator Edward Kennedy) played an important role in the Democratic narrative.

Two candidates called it quits last week, and they also generated quite different coverage. Republican Rudy Giuliani, the early frontrunner whose candidacy expired in Florida, generated twice as much coverage as Democrat John Edwards, who was never able to crack the media’s “two company, three’s a crowd” view of the Democratic contest. But much of Giuliani’s coverage was a schadenfreude-saturated post-mortem attacking his candidacy.

These are some of the findings from Project for Excellence in Journalism’s fourth edition of the Campaign Coverage Index, a measure of which candidate is winning in the all-important race for media exposure. The Project will run the Index until nominees are selected in each party.

Last week was a big one for McCain. He beat Romney in Florida, and won the endorsements of Giuliani and California Governor Arnold Schwarzenegger. In the first three weeks of the CCI, the gap between McCain and Romney never exceeded five points. Last week, however, McCain was a significant or dominant newsmaker in 37% of the campaign stories compared with only 21% for Romney. Both totals were up from the previous week, but McCain’s more than doubled—from 17% to 37%.

Giuliani, at 14%, matched his coverage from the week before. But Huckabee, who had earned a respectable 14% of coverage as recently as the week of Jan. 19 South Carolina primary, was down to just 2% last week, even though he is still running.

The parties’ overall battle for coverage was close, with the Democrats featured in 46% of the stories compared to 42% for the GOP. 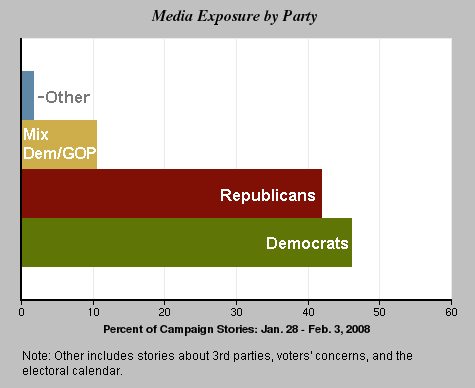 One story line was also answered in the coverage last week: would the press consider the Democratic vote in Florida important? The Clinton campaign hoped they would, and she talked about the significance of the turnout there to make that happen. The answer was the press generally did not, leading MSNBC talk host Dan Abrams—who often accuses the media of anti-Clinton bias—to ask “how can so many ignore the results in Florida?” The Republican Florida primary was much more important to the media than the Democrats’ contest where no delegates were at stake.

But if Florida was not a key part of the Democratic coverage last week, Clinton and Obama did attract major attention

For the week, Obama was a significant or dominant newsmaker in 34% of the campaign stories compared to 32% for Clinton. (Both candidates’ coverage dropped from the previous week when Obama nipped Clinton, 41% to 40%.) And Edwards was at 7% in his swan song week.

The wild card was Kennedy, who with his niece Caroline, delivered Obama a symbolically significant endorsement on Jan. 28. As a result, Kennedy was a dominant newsmaker (50% or more of the story) in 7% of the campaign stories last week.

During the week of the Democrats’ Jan. 26 South Carolina primary, the non-candidate newsmaker was Bill Clinton, whose aggressive campaign role made him a significant or dominant figure in 18% of the stories and generated numerous suggestions that he lower his profile. Last week he did, registering at only 6% on the Coverage Index.

The campaign also continued to overwhelm all other news in the national press. The story accounted for 51% of all the news measured by PEJ’s News Coverage Index in the week of Jan. 28-Feb. 3. That was the highest level for the campaign since that Index began in January 2007. The race for the White House consumed 49% of the network news airtime, 59% of the radio time, and 76% of the cable newshole. Since the beginning of the year, the campaign has swamped all other news, averaging 46% of the newshole per week. In all of 2007, only one story ever reached that level and that was the Virginia Tech massacre, which accounted for 51% of the coverage for just one week.

For McCain, the media narrative began with him locked in a tight race with Romney in Florida. The Jan. 29 New York Times described both candidates “trading attacks [and] aggressively courting voters across the Florida peninsula in a primary battle that could producer a clear front-runner…” The Florida win then cemented the idea of McCain as a frontrunner, if not a steamroller. A Jan. 30 FoxNews.com report on Google News described the Arizona Senator’s “wave of political momentum” in his race.

The next morning NBC’s Today show codified that momentum. “John McCain is very quickly consolidating Republican support,” correspondent David Gregory noted. “Mitt Romney’s only play left is to appear as the conservative alternative to John McCain, a job more difficult with Mike Huckabee still in the race…” By the time the weekend polls had hit, the press was portraying McCain on the cusp of victory. A Feb. 3 Washington Post story showed him up by 24 points over Romney in a national poll, a lead, the article concluded, that “gives him the opportunity to effectively wrap up the nomination with a strong showing Tuesday.”

In a week, the narrative had taken McCain from the Florida nail biter to the Super Tuesday Promised Land, a considerable journey.

As for Giuliani, his departure finally generated a fair amount of attention, just as his expected departure had a week earlier. (He had a lot more trouble generating attention before that). But the narrative was blunt and pretty universal.

“He was a terrible candidate,” Mark Shields put it on the Jan. 30 edition of PBS’ NewsHour. “The more he campaigned, the worse he did in every state…He didn’t seem very comfortable with people.”

As seems to be the case every week, Clinton and Obama were locked in the same one-on-one story line. The Kennedy endorsements, complete with the fiery rhetoric of the silver-maned Massachusetts Senator, generated plenty of coverage, with ABC’s Kate Snow speculating that “the Kennedy name could help in heavily Hispanic states, like New Mexico and Arizona.” Her ABC colleague David Wright went considerably farther, rhapsodizing that “today, the audacity of hope had its rendezvous with destiny.”

But the most eagerly awaited event was the Jan. 31 debate, the first chance for the African-American and female candidate to square off directly. When it was over, the media verdict was summed up by CNN’s Bill Schneider. Writing for CNN.com on Feb. 1, he described it as an encounter that settled little. “In all, it was an unhelpful debate,” Schneider wrote. “They minimized their differences. Last night’s showdown will rally Democrats…but won’t help them make a decision.”

“Sens. Hillary Rodham Clinton (N.Y.) and Barack Obama (Ill.) are running roughly even nationally as the battle for the Democratic nomination heads into Tuesday’s big round of primaries and caucuses,” the Feb. 3 Post story declared. “The Democratic contest is likely to keep going.”

In other news, for the third week in a row, the troubled U.S. economy was the second-biggest story behind the campaign, as measured by the News Coverage Index for Jan. 28-Feb. 3. But at 7% of the newshole, it was down significantly from 19% the previous week. That was followed by President Bush’s State of the Union address at 6%. (In contrast, last year’s State of the Union was at 13% and tied for top story of the week.)

Rounding out the top-five story list was violence in Kenya (2%) and the conflict in Afghanistan (also at 2%). Once again, with the primary season reaching its peak, there is little oxygen for other news.