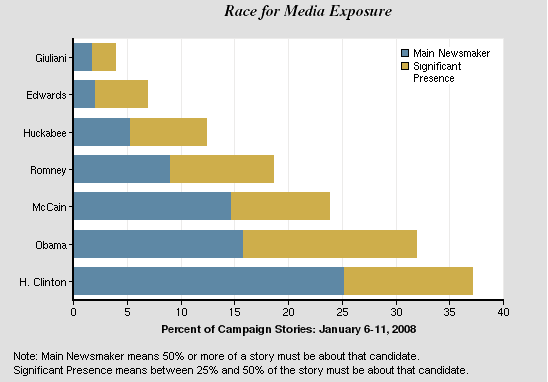 victory in New Hampshire helped make her the leading campaign newsmaker last week, but the resurrection in the Granite State of John McCain’s once-dead campaign did not translate into similar largesse of media attention, according to a new study of media campaign coverage.

Meanwhile, the meaning of third place was also fungible last week. Mike Huckabee, a distant third in the GOP race, got sizably more media attention than did John Edwards among the Democrats.

And New York Mayor Mike Bloomberg, who is not running, got nearly as much coverage for showing up at a conference in Oklahoma as Rudolph Giuliani did for finishing fourth among Republicans.

These are some of the findings in the Project for Excellence in Journalism’s inaugural Campaign Coverage Index, a measure of which candidate is winning in the all-important race for media exposure.

From January 6 through 11, two days before the New Hampshire primary, the primary day, and the three days following, 37% of all campaign stories were either primarily or significantly about Hillary Clinton. Barack Obama came next at 32%, followed by John McCain at 24% and Mitt Romney at 19%.

The fact that both Clinton and Obama generated substantially more coverage than any Republican may reflect the inexorable influence of media expectations in shaping coverage. Clinton’s stunning upset over a supposedly surging Obama defied the polls and pundit prognostications, while the polls accurately predicted McCain’s win over Mitt Romney.

The coverage of the third-place finishers in New Hampshire may also say less about results and more about the expectations game. Edwards—who finished second in Iowa and third in New Hampshire—was far behind in the race for media exposure at 7%. Huckabee—who won Iowa and finished a distant third in New Hampshire—ended up a significant factor or main newsmaker in 12% of the stories. That may reflect the media consensus that while Huckabee is still alive in a fluid GOP race, the Democratic fight has largely been winnowed down to a Clinton-Obama contest.

The suddenly more competitive Democratic race also attracted more media attention last week than the wide-open GOP race. All told, 43% of campaign stories were mostly about Democrats, while Republicans dominated 32%. Another 19% were about candidates in both parties.

That higher level of coverage of Democrats, however, also continues the trend of more attention to Democrats that PEJ has monitored for much of the campaign since January of 2007.

That focus on Clinton’s surprising win infused much of the media punditry following New Hampshire. But perhaps no media figure put it in edgier terms than Fox’s News’ Brit Hume, who on election night said, “People had written finis to the Clinton era. And guess what? They’re baaaack.”

The Campaign Coverage index, which will appear weekly until nominees are selected in each party, will be an addition to PEJ’s NCI report, which tracks what stories the media covered in the previous week. The new CCI offers a greater level of detail of the campaign coverage. That includes the percentage of stories in which a candidate played a significant role (as a subject of between 25% and 50% of the story) or a main newsmaker role (making up at least 50% of the story). The Index also identifies the key narratives in the reporting and the “Line of the Week,” a statement from a journalist or source that in our researchers’ estimation seems either to capture the story or is particularly colorful. PEJ’s News Coverage index will not disappear. It will come at the bottom of the CCI. 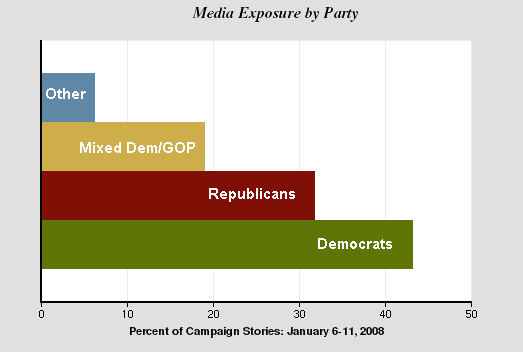 Interestingly, the differences in the amount of media coverage among the top contenders in both parties last week quite closely reflected the margins in the New Hampshire vote. Clinton, who defeated Obama by three percentage points outdistanced him in coverage by five points. On the GOP side, McCain, who bested Romney by 5 points in New Hampshire, outdid him in coverage by five points as well.

Coverage of the presidential race completely overshadowed every other news story last week. The campaign filled 49% of the overall newshole from Jan. 6-11, as measured by PEJ’s News Coverage Index. The topic filled more than half the newshole in three media sectors—53% of the airtime on radio, 54% of the time on network news, and a stunning 66% of the newshole on cable news. The next biggest story filled 4% of the newshole.

Clinton emerged not only as leading newsmaker last week, she had an even bigger edge when it came to the number of stories in which she was the dominant figure (making up at least 50% of the story). Clinton was the dominant or primary newsmaker in fully 25% of the stories, vs. 16% for Obama, 15% for McCain and 9% for Romney.

The Narratives: From Clinton’s Roller Coaster to McCain’s Saving Comeback

Clinton: The week of Jan. 6-11 represented a roller coaster ride for Clinton. On Jan. 7, she was given virtually no chance of beating Obama in New Hampshire. ABC’s Good Morning America rolled out a new poll showing him with a 10-point lead (39% to 29%) while co-host Diane Sawyer declared that, “Senator Clinton has to ramp it up as she has never done before…She’s pulling out everything in her arsenal.” The news was no cheerier on Election Day, when NBC anchor Brian Williams warned of a “shakeup in the Clinton campaign” and correspondent Andrea Mitchell said Clinton’s best hope seemed to be “avoid a big defeat…” The very future of her presidential bid seemed in some jeopardy.

Then the votes were counted and the pundits were stunned. Election night was full of mea culpa. The next morning on NPR, correspondent Mara Liasson was asked simply, “What happened?”

“I would say,” Liasson answered, “Hillary Clinton has earned the label ‘Comeback Kid’ even more than her husband.” By Jan. 10, some of the coverage had already come full circle. A Forbes.com piece posted on Google carried a headline after New Hampshire that read: “Clinton The Favorite Once Again.”

Obama: For Obama, one could see the reverse in the coverage’s trajectory. “There is talk and evidence of an Obama wave moving through this state on the eve of its primary,” declared ABC anchor Charles Gibson on Jan. 7. The first sentence of the Page One story in the Washington Post on primary day talked matter of factly of Obama “anticipating a victory.” Some quarters of the commentariat were already anointing Obama as the likely Democratic nominee (as Fox News Channel commentator and New York Times columnist William Kristol did). Two days later, concluding that the voters in Iowa and New Hampshire had “settled little,” the Jan. 10 front-page story in the Wall Street Journal called the race a jump ball, noting that there is "no clear front-runner in either party.”

McCain: For McCain, New Hampshire was depicted as pivotal. Expectations were such that a loss there might have been portrayed as a devastating failure. A Jan. 7 Associated Press story, which featured a tight poll slightly favoring McCain over Romney (34% to 30%), declared that the “stakes this week are especially high…. McCain has put all his focus on a New Hampshire victory that would repeat his success here eight years ago.” That evening, PBS’ Judy Woodruff offered a foreshadowing of his victory. “McCain is pulling crowds here he hasn’t seen in months,” she observed.

Despite the expectations, when the win came, McCain was treated along with Clinton as one of the “Comeback Kids.” “John McCain surges from his summer slump as ‘Comeback Kid’ for Republicans,” declared Harry Smith on the Jan. 9 edition of CBS’ Early Show as Chuck Berry’s “Johnny B. Goode” blared in the background.

Romney: After he was damaged by his loss to Huckabee in Iowa, the media portrayed New Hampshire as an important but not necessarily decisive test for Romney. He “needs a victory to prove his candidacy isn’t crippled after an Iowa drubbing,” concluded the Jan. 7 Associated Press story. And there was buzz from some journalists at the eleventh hour that he might even get it. When he then lost to McCain, the story quickly moved to Michigan, Romney’s home state, and the stakes in the media narrative got significantly higher. One could sense in the coverage Romney trying to fend off just those expectations. In a Jan. 11 Today interview with Romney. Meredith Vieira pointedly noted that “a lot of people are saying that Tuesday’s primary in Michigan could be make or break…” Romney responded by saying “I’m planning on winning in Michigan.” But when Vieira asked if it was now a must-win state for him, Romney said “I’d like to win, of course, and I’m sure I’ll come in first or second.”

Huckabee: For Huckabee, as it was for McCain in Iowa, the news of the week was about how third or fourth place can be spun as a good thing. Huckabee’s dramatic win in Iowa provided him with extensive coverage, but the expectations were never high for him in New Hampshire, a fact often attributed in the press to its much smaller population of evangelical Christians. Thus the media narrative was largely that Huckabee would not do particularly well, but would live to fight another day—most likely in South Carolina. This was a case of almost getting a pass. In a report filed from South Carolina on Jan. 9, CNN’s Dana Bash said the Huckabee campaign was optimistic that “he can and should do well here [because] just like inside Iowa, there is a large contingent of evangelicals, Christian conservatives…” Bash also noted that while Huckabee had avoided talking a lot about social issues in more libertarian New Hampshire, his pro-life views had again taken center stage.

Thus just as a Hillary victory in New Hampshire was all the more powerful because it was unexpected, a distant third place could prove harmless for Huckabee, much more so than it proved to be for Edwards.

While the campaign overwhelmingly dominated coverage last week, three of the remaining top five stories emanated from the troubled Middle East. President Bush’s ambitious two-pronged mission to the region to encourage progress in Israeli-Palestinian negotiations and rally regional allies against Iran, would, in other circumstances, have been a major story. Last week, it accounted for only 4% of the newshole as the second-biggest story of the week. (It did generate 12% of the online coverage.)

Growing concerns about the R-Word (recession) made the U.S. economy the third-biggest story at 3%. And the next two stories involved Mideast hotspots. The close call between Iranian speedboats and the U.S. Navy in the Straight of Hormuz made Iran the fourth-biggest story at 3%, while events on the ground in Iraq—dominated by news of a U.S. offensive against Al-Qaeda—also generated 3% of the coverage.