The study also found that despite the dangers involved in contacting sources, journalists in Iraq managed to bring in multiple voices to their coverage.

Slightly more than a quarter of the stories (27%) were a straight recitation of facts that basically did not call for comment or viewpoint from observers. Stories like the number of deaths that day, the departure of the last British troops from the country, or the announcement of the reburial of Saddam Hussein’s sons were all covered in this manner, for example.


Number of Stakeholders in Stories 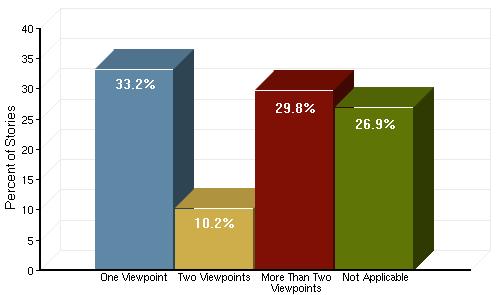 A report from April 23 Paul Zahn on CNN about the U.S. Military’s plan to build 12-foot security walls is an example. The report talked to an Iraqi man who was among 7,000 Iraqis demonstrating against the wall, a CNN Military Analyst, U.S. ambassador to Iraq, Ryan Crocker and Prime Minister Maliki.

That left a third of all the stories examined (33%) that contained only one or mostly one point of view. While that number may strike some as high, it is actually lower than the Project has found in some other studies. [1]

Looking at the total newshole (time and space as opposed to number of stories), the coverage is even more broadly sourced.

Just 5% of the newshole was straight factual accounts while roughly half (49%) offered views from at least three different stakeholders. Another 13% had two perspectives.

And one-third (33%) of the newshole was made up of stories that were either all or mostly all from one stakeholder group.

Where the range of stakeholders was not consistent was across media genre. Text-based genres of newspapers and websites offered much more depth of views than did the broadcast genres. First, the text-based genres had less straight factual reporting. There were no such stories in newspapers and a mere 3% (5 stories in all) online. Rather, 75% of newspaper stories (77% of newshole) involved stories with more than two viewpoints as did 67% of online coverage (74% of newshole).

Broadcast (network, cable and radio combined) on the other hand, aired more straight, just-the-facts reports. These made up 36% of broadcast stories and 9% of newshole. Just 15% (28% of newshole) contained three or more views and 38% of stories (47% of newshole) offered just one. Some of this difference likely has to do with the natural time limits associated with broadcast news. Producers have told PEJ in the past that because of these limits, they often do not cite all sources contacted for a report. [2]

And when there wasn’t a multiplicity of viewpoints, whose views were we hearing?

In the main, we were hearing from American sources. Of the stories with primarily one view or stakeholder, six out of ten of these were American.

More often than not, it was a U.S. military officer. More than a third (35%) of the stories with a single stakeholder relied on a military commander giving an official military view. Another 11% cited a soldier in the field.

After the U.S. military, two other source types dominated these single stakeholder stories: Journalist themselves, primarily correspondents in the field (12%) and someone from the Iraqi government (10%).

Again, these findings support the PEJ survey of journalists in Iraq. These journalists describe U.S military personnel as the easiest sources to get. Nearly nine in ten (86%) considered access to the military officers as easy or doable with some effort.

Footnotes 1. The level of stories with multiple points of view compares quite competitively with the level of multi-viewpoint reporting found when PEJ examined this issue for various media sectors in PEJ’s content analysis in the 2005 State of the News Media annual report, and compares favorably to what we found in cable news.

The Portrait from Iraq - How the Press Has Covered Events on the Ground About the Study A Picture of Violence and Chaos Continuing Violence Themes About Where the Country Was Headed Coverage over Time Changing Public Opinion November: A Surge for the Surge? The Question of Bias Events Inside Iraq, The News Is Still About Us
A Wide Range of Stakeholders
Methodology Topline