Finally, one question that has hovered over the coverage from the beginning of the war was whether journalists have been too negative in their assessments of the situation in Iraq. Early on, this was a common criticism among some in the Administration. Those criticisms have become less pronounced over time, but they have not disappeared.

“The new political-military strategy is beginning to show results, “Senator John McCain, who is campaigning for the Republican presidential nomination and supports the surge, wrote in the April 8, edition of the Washington Post. “But most Americans are not aware because much of the media are not reporting it or devote far more attention to car bombs and mortar attacks that reveal little about the strategic direction of the war …”1

“What the media are missing is how we will get out of Iraq and leave a stable Iraq behind,” said Col. Steve Boylan, spokesman for Army Gen. David Petraeus, commander of coalition forces.2

The journalists surveyed tend to disagree. Most (70%) of those surveyed believe their coverage overall has given an accurate picture of what is happening there. About one-in-six (15%) believe the coverage makes the situation look better than it is. Hardly any (3%) believe it focuses too much on the negative. 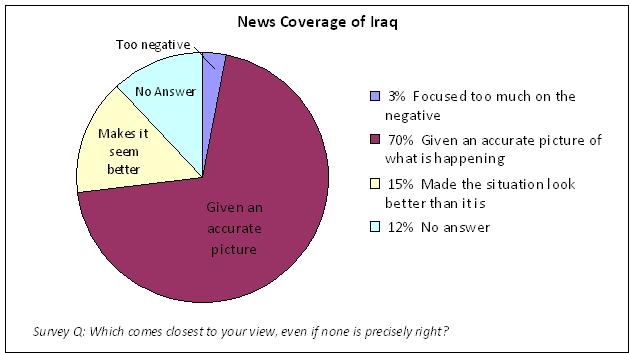 The public, while divided on the question, is far more likely than the journalists to view the coverage as too negative. A Pew public opinion survey in August found that more than a third of the public (37%) believed news reports were making the situation in Iraq seem worse that it really was. Roughly a third (34%) thought the press portrayed Iraq accurately. Just under a quarter (21%) believed the media made the situation seem better than reality.3

2. Sig Christenson, “A reporter speaks out about the Iraq war and news coverage,” Niemen Watchdog Report, August 6, 2007. Online at: http://www.niemanwatchdog.org/index.cfm?fuseaction=background.view&backgroundid=199

Next: Who They Are
← Prev Page
Page1Page2Page3Page4Page5Page6Page7You are reading page8Page9Page10Page11
Next Page →