The question of when networks project elections, and which network jumps first, is a matter closely watched in media circles. The news organization first off the mark can win viewers who want to know who won before they head off to bed. Yet if a broadcast network or cable news channel calls a race too soon, and has to pull it back, history shows that is an embarrassment, not a point of pride. 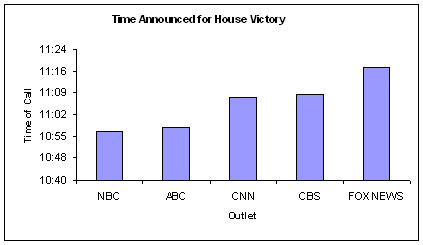 This year’s mid-term elections made the projection chase more difficult. Many of the races that would determine whether control of the House and Senate changed hands were close enough that the final numbers had not come in by the time the networks were handing off coverage to local affiliates at 11 p.m. Eastern Standard Time.

As the clock wound down, NBC and its cable sibling MSNBC moved first, at 10:57, just three minutes before signing off on the East Coast. What’s more, their projection of 231 Democratic seats to 204 Republican came with somewhat curious caveat, a “margin of error” as they put it, of plus or minus 10 seats. That meant the Democrats, by NBC’s count, could hold the House by as few as seven seats or as many as 47. Call it a cautious projection.

It is not unusual once one news organization moves for others to quickly follow. ABC’s projection came just one minute later. CNN was next, at 11:08 p.m., followed another minute later by CBS.

For the five TV news organizations, this was the best they were going to do on this election night. It was clear by then that forecasting the Senate was not going to be possible—at least before the East Coast went to bed. Some correspondents were already talking about a recount in Virginia. At least one analyst on Fox was making analogies to the Florida recount of 2000, when several networks called the presidency wrong, an evening that is not remembered as one of the finer nights in the history of TV election coverage.