They enjoy having so much information available, rather than feeling overloaded

87% say the Web helps them learn new things; 72% say it improves their ability to share

WASHINGTON (Dec. 8, 2014)—Rather than crushing them with too much information and making it hard to find useful material, most Americans say the internet and cell phones have brought benefits in learning, sharing, and diversifying the flow of information into their lives. 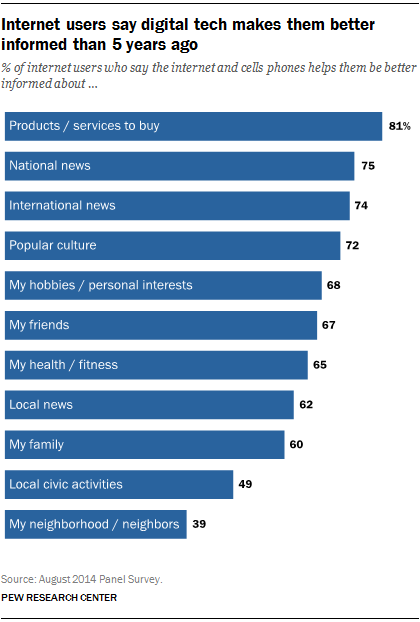 A new survey by the Pew Research Center finds that the vast majority of Americans believe their use of the web helps them learn new things, stay better informed on topics that matter to them, and increases their capacity to share ideas and creations with others.

These generally positive attitudes are buttressed by the view that people like having so much information at their fingertips, rather than feeling information overload. Moreover, this upbeat judgment extends to the broader culture. Most believe that average Americans and U.S. students are better informed than in the past.

The survey of 1,066 internet users shows that 87% of online adults say the internet and cell phones have improved their ability to learn new things, including 53% who say it has improved this “a lot.”

“We have asked this ‘information overload’ question since the beginning of our research in 2000 and have consistently found the same thing: Americans like lots of information choices and don’t feel particularly oppressed by the growing flows of material into their lives,” noted Lee Rainie, Director of Internet, Science, and Technology research at the Pew Research Center. “Even through all the tech change in the past generation, people say they are coping fine and relish the new options they have to get and share the information that matters to them.”

Online Americans especially highlight how the internet and cell phones have made them better informed about products and services available for sale, national and international news, and popular culture. Asked if their internet use affected their being better informed on these issues compared with five years ago:

Friends: 67% of online adults say they are better informed about friends than they were five years ago, and 60% feel they know more about family.

Civic and community life: Fewer internet users say these tools have made them better informed about … 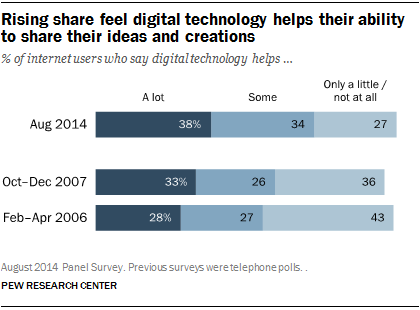 Perhaps surprisingly in both cases, internet users under age 30 are the least likely to believe the internet is making average Americans or today’s students better informed. Instead, they are more likely than their older counterparts to say the internet has had no real impact—19% of young adult internet users say so, compared with 9% of those ages 30 and older.

The analysis in this report is based on an online probability survey conducted September 12-18, 2014 among a sample of 1,066 adult internet users, 18 years of age or older. The survey was conducted in English by the GfK Group using KnowledgePanel, its nationally representative online research panel. Sampling error for the total sample of 1,066 respondents is plus or minus 3.3 percentage points at the 95% level of confidence. For more information on the GfK Privacy Panel, please see the Methods section at the end of this report.

For more information or to arrange an interview, please contact Dana Page at dpage@pewresearch.org or 202-419-3665

Full Report: Americans Feel Better Informed Thanks to the Internet

Americans Feel Better Informed Thanks to the Internet
African-Americans and the Internet
The Internet and the Iraq war
Internet Penetration and Impact
The Trump-Biden presidential contest
White Christians continue to favor Trump over Biden, but support has slipped
An examination of the 2016 electorate, based on validated voters
The Changing Racial and Ethnic Composition of the U.S. Electorate
How Trump compares with other recent presidents in appointing federal judges