This study examines online and offline political engagement and pays special attention to the role of social networking sites in people’s political activities.1 There are several major findings:

First, 48% of adults directly take part in a civic group or activity.

In this survey, the Pew Research Center’s Internet & American Life Project measured several broad categories of civic activity that Americans might engage in. The first finding is that half (48%) of American adults directly took part in a civic group or activity in the 12 months preceding our August 2012 survey. This includes anyone who did one or more of the following six activities:

Second, 39% of adults recently contacted a government official or spoke out in a public forum via offline methods. Third, 34% did those things via online methods.

In the second category of public engagement, we found that 39% of American adults have recently contacted a government official or spoken out in a public forum about an issue that is important to them via offline means. In the third category, we found that 34% have done so via online methods. This includes anyone who did one or more of the following activities that might take place in either online or offline spaces:

Fourth, 39% of adults do political or civic activities on social networking sites.

In the fourth category, 39% of American adults took part in some sort of political activity in the context of a social networking site such as Facebook or Twitter in the 12 months preceding our survey. This includes anyone who did one or more of the following eight activities listed in the table below: 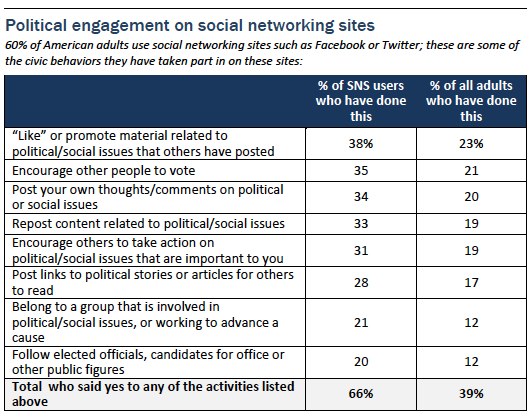 In total, nearly three-quarters (72%) of all American adults did at least one of the activities that we measured in those four broad categories of civic and political engagement.

Traditional political activities are most common among the well-educated and financially well-off, regardless of whether they take place online or offline. On social networking sites, income-related differences are more modest — but civic engagement in these spaces is still most prevalent among those with higher educational levels.

Those who live in higher income households and those with higher levels of education (specifically, those who have attended or graduated from college) are consistently more likely than those with lower income or education levels to take part in many of the online and offline civic behaviors we measured in this study. This gap is especially pronounced for the following specific activities:

On the other hand, when it comes to the 60% of American adults who use social networking sites such as Facebook or Twitter, political participation is more balanced between lower and higher income Americans. Among social networking site users, political participation is identical for those who live in the lowest earning households (annual household income of less than $10,000) and highest earning households (annual household income of $150,000 or more).

Higher income Americans are more likely to use social networking sites in the first place, so income-related differences are evident when the base measurement applies to all adults – not just SNS users. But even on an “all adults” basis, the gap in political participation between the lowest and highest income groups is generally smaller on social networking sites than it is for other types of political engagement.

At the same time, even as differences in social networking engagement are less pronounced with respect to income, the college-educated are significantly more likely than those with a high school education to take part in nearly every SNS-related behavior we measured in our survey. And in contrast to income (where SNS users in the lowest and highest categories were equally likely to use these sites for political reasons) these educational differences persist even when we account for different levels of adoption between those with lower and higher education levels.

In other words, even as the impact of income on political participation is more modest in the context of social networking sites, socio-economic distinctions related to education still play a prominent role in these spaces.

More broadly, those at the lower end of the socio-economic spectrum are generally less involved with the day-to-day outreach, chatter, and discussion around political issues — regardless of whether those discussions take place in physical or digital spaces. Compared with the well-educated and financially well-off, they are much less likely to receive political communications through a variety of channels, or to have conversations about political or social issues with others in either online or offline venues. Ultimately, political issues, political activity, and political discussion are less present in the lives of these Americans than they are for those at the upper end of the socio-economic scale.

Younger adults are just as likely as older adults to be engaged in many political activities, and are much more likely to be politically active on social networking sites.

Indeed, the youngest American adults are more likely to engage in political behaviors on social networking sites than in any other venue. And the typical (median) 18-29 year old took part in three of the eight SNS-oriented political behaviors measured in this survey. The general youth of the “political SNS user” group also helps to explain the balance between high- and low-income users when it comes to political activity in these spaces, since many of these younger adults are only beginning their careers and have not fully maximized their earning potential. 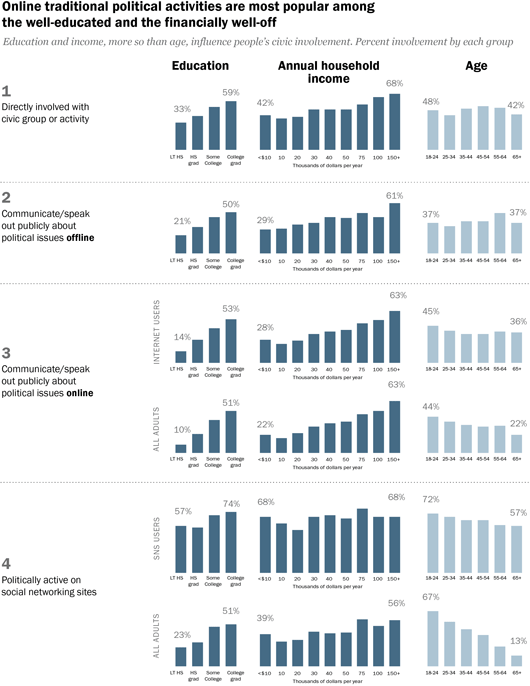 Click to view a larger version of the image.

The structure of political activity on social networking sites has grown in importance in recent years. The number of social networking site users has grown from 33% of the online population in 20083 to 69% of the online population in 2012. And as the overall SNS user population has grown, more of these users are engaging in one way or another with political or social issues on these sites, compared with 2008 when we asked a similar set of questions about this subject. Here are some of the key areas of growth:

We also asked directly about the impact of social networking site discussions on users’ political behaviors and found that:

In each instance, users were evenly split between those who found out about the issue in question from someone they know personally, and those who found out about it from someone they don’t know personally, such as an organization or public figure. Younger SNS users are especially likely to engage in deeper investigations of issues based on discussions within those sites, as are those with a college degree.

Adding these four categories together, some 83% of political SNS users also get involved in political or social issues in one way or another outside the bounds of social networking sites themselves.4

Despite the increased prominence of online platforms when it comes to Americans’ political activity, much of the day-to-day conversation around these issues takes place in traditional (offline) channels. On an “every day” level, Americans are three times as likely to discuss politics or public affairs with others through offline channels (in person, by phone call, or by letter) as they are through online channels. Even the most tech-savvy users — such as young adults, college graduates, or those with high incomes—discuss politics with greater frequency offline than online. 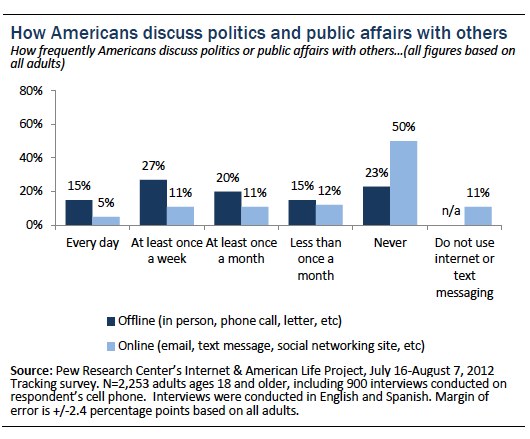 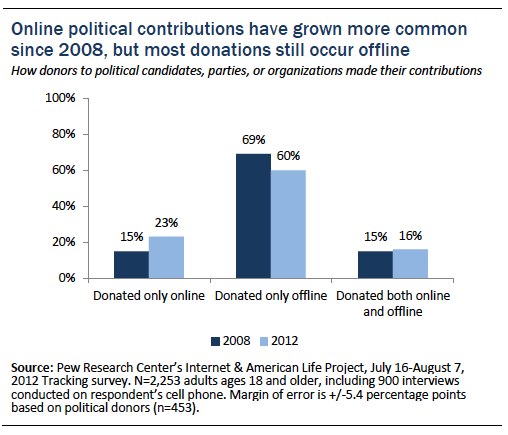 Mobilization and Outreach: Email and social network users are frequently contacted and asked to take part in civic activities within those online spaces.

Although online tools play a secondary role in Americans’ day-to-day political discussions with others, they have more prominence when it comes to outreach by groups or organizations looking to encourage political action (such as donating money, contacting a public official, or working for a candidate or cause). Email is particularly notable in this regard: 21% of email users regularly get asked on email to take some action around a political or social issue — that works out to 18% of all Americans who regularly receive mobilization messages via email. Social network users also tend to receive relatively frequent calls to action within the context of these sites, as 13% of SNS users (representing 8% of all adults) regularly receive outreach messages on these sites.

Taking all of these communications modes together, some 65% of Americans are contacted at least occasionally by groups or individuals asking them to take some sort of civic or political action, with 33% saying they are contacted for this reason on a regular basis (once a week or more frequently). As with many of the civic behaviors discussed here, these contacts are reported more frequently by those with relatively high income and education levels, and those who receive frequent political communications tend to be highly active in various online and offline venues. 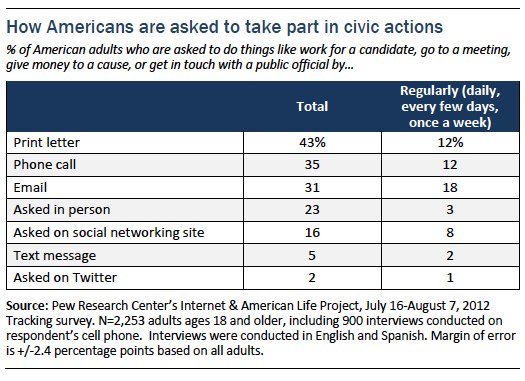 There are also some partisan differences among the different types of outreach. Conservatives and Republicans are more likely than liberals and Democrats to receive political “calls to action” in the mail, while liberals and Democrats are more likely than conservatives and Republicans to receive these messages on social networking sites.

Those who have been affected by the recent economic downturn are actively involved with political and social issues across a range of platforms.

Overall, some 56% of the population has experienced one or more of the following impacts in the preceding year as a result of the recent economic slowdown:

Members of this “economically affected” group tend to have relatively low incomes compared with those who have not experienced these impacts, but are also relatively young and well-educated as a group. Moreover, the economically affected are fairly active when it comes to expressing themselves about the issues of the day in various online and offline venues. Compared with the 44% of Americans who have not experienced any of these impacts:

Campaign donations are one of the few areas where the “affected” stand out from the rest of the population. Some 13% have made a campaign contribution in the year preceding our survey (compared with 20% of those who have not experienced any of these impacts).

This report is based on the findings of a survey on Americans’ use of the Internet. The results in this report are based on data from telephone interviews conducted by Princeton Survey Research Associates International from July 16 to August 7, 2012, among a sample of 2,253 adults, age 18 and older. Telephone interviews were conducted in English and Spanish by landline (1,353) and cell phone (900, including 469 without a landline phone). For results based on the total sample, one can say with 95% confidence that the error attributable to sampling is plus or minus 2.3 percentage points. For results based Internet users (n=1,873), the margin of sampling error is plus or minus 2.5 percentage points.

We would like to thank Sidney Verba, Kay Lehman Schlozman, and Henry Brady for generously contributing their time and expertise to the development of surveys of civic engagement in both 2008 and 2012.

Next: Part 1: Online and offline civic engagement in America
← Prev Page
You are reading page1Page2Page3Page4Page5
Next Page →