Social networking use among internet users ages 50 and older has nearly doubled—from 22% to 42% over the past year.

While social media use has grown dramatically across all age groups, older users have been especially enthusiastic over the past year about embracing new networking tools.  Although email continues to be the primary way that older users maintain contact with friends, families and colleagues, many users now rely on social network platforms to help manage their daily communications—sharing links, photos, videos, news and status updates with a growing network of contacts.

Young adult internet users ages 18-29 continue to be the heaviest users of social networking sites like Facebook and LinkedIn, with 86% saying they use the sites. However, over the past year, their growth paled in comparison with the gains made by older users. Between April 2009 and May 2010, internet users ages 50-64 who said they use a social networking site like MySpace, Facebook or LinkedIn grew 88% and those ages 65 and older grew 100% in their adoption of the sites, compared with a growth rate of 13% for those ages 18-29.

The use of Twitter and other services to share status updates has also grown among older users—most notably among those ages 50-64. While just 5% of users ages 50-64 had used Twitter or another status update service in 2009, 11% now say they use these tools. On a typical day, 6% of online adults ages 50-64 make Twitter a part of their routine, up from the 1% who did so in 2009.

Social media properties—including networking and status update sites—are newer additions to the daily digital diet of older adults. Yet, the “stickiness” of the sites is notable. To look at the data another way, among the pool of adults ages 50 and older who use social networking sites, 44% used them on the day prior to their being contacted for our survey.

The pool of Twitter and status update users ages 50 and older is too small to segment, but the behavior of this limited early adopter group does suggest a similar tendency towards regular use of the sites.

By comparison, less than half of online banking users ages 50 and older visited the sites on a typical day and less than one in five older users of online classified sites reported use of the sites “yesterday.”

Implications: Why social media might be catching on for older adults

However, even though older adults may be among the most resistant to broadband, there is evidence that once these users get a taste of high-speed access, they often come to rely on the internet as an everyday utility in their lives. While the rates of broadband adoption among the oldest users are low, the frequency of use among those who do have high-speed access is relatively close to the usage levels of younger users.

So why might social media be increasingly attractive to older adults?

First, our research shows that social networking users are much more likely to reconnect with people from their past, and these renewed connections can provide a powerful support network when people near retirement or embark on a new career.

There are two activities which stand out among people living with chronic disease: blogging and participating in online health discussions. When other demographic factors are held constant, having a chronic disease significantly increases an internet user’s likelihood to say they work on a blog or contribute to an online discussion, a listserv, or other forum that helps people with personal issues or health problems.

And finally, social media bridges generational gaps. While the results can sometimes be messy, these social spaces pool together users from very different parts of people’s lives and provide the opportunity to share skills across generational divides.

There are few other spaces—online or offline—where tweens, teens, sandwich generation members, grandparents, friends and neighbors regularly intersect and communicate across the same network. Photos, videos and updates shared on a daily basis can provide a valuable connection to faraway family and friends who are tied together in a variety of ways. The children and grandchildren of older adults are documenting many aspects of their lives through social media, and these are also becoming popular spaces for professional networking, continuing education, and political participation.

Various organizations that work with older adults—such as AARP, Older Adults Technology Services (OATS) and Project GOAL—have been actively promoting social media resources that are relevant to mature users. In March, the FCC’s National Broadband Plan specifically requested additional funding from Congress to invest in digital literacy training programs for older Americans. One idea proposed under the plan was to support a “National Digital Literacy Corps” that trains volunteers to teach digital skills to those who are least connected in their communities—including pairing tech-savvy digital natives with seniors. With 86% of internet users ages 18-29 using social networking sites and 60% doing so on a typical day, it is not hard to imagine that some of these young mentors would be eager to share their skills in profile management with older users. 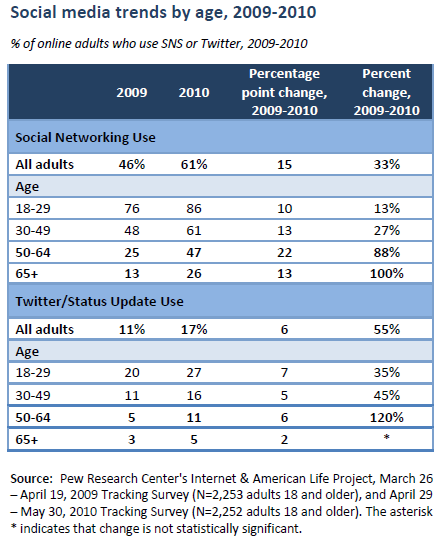