How Americans learn about community issues

Americans use a range of approaches to keep informed about what is happening in their communities and online activities have been added to the mix. Face-to-face encounters and phone calls remain the most frequent methods of interaction with neighbors. At the same time, internet tools are gaining ground in community-oriented communications.

In a poll conducted at the end of last year, we asked about online connections to communities and neighbors and found that in the twelve months preceding our survey:

These findings come from a national telephone survey conducted November 30 to December 27, 2009 among 2,258 Americans (including 565 reached on a cell phone). The margin of error for the full sample is plus or minus 2.4 percentage points. For results based internet users (n=1,676) the margin of sampling error is plus or minus 2.8 percentage points.

Who knows who in neighborhoods and how neighbors interact

Americans use a range of tools to interact with their neighbors and keep up with community events—from face-to-face discussions to local blogs and listservs. These specific approaches are discussed in more detail below.

Having face-to-face interactions with neighbors about community developments is tightly linked with factors such as age, socio-economic status and race. Latinos, 18-29 year olds, those without a high school diploma and those with a household income of less than $30,000 per year are among the groups that are least likely to speak to neighbors in person about community issues. These groups are also relatively unlikely to know most or all of their neighbors by name; there is a strong correlation between knowing one’s neighbors and having face-to-face interactions to discuss community issues. 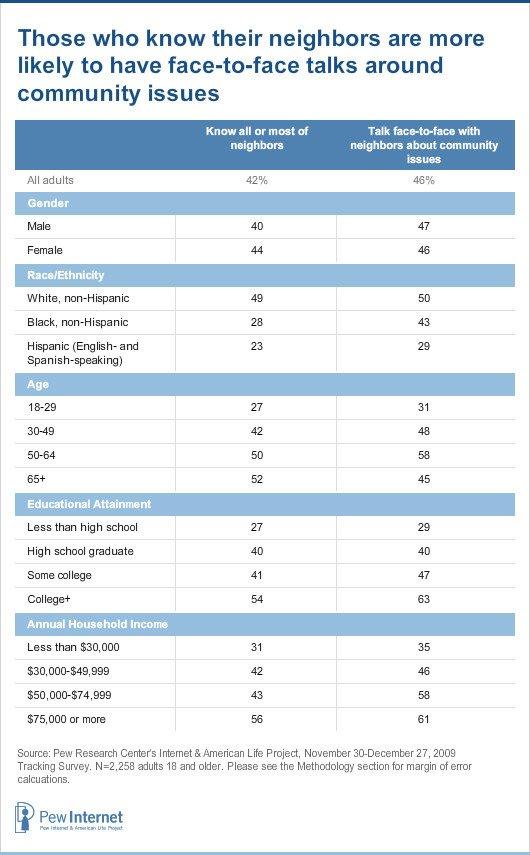 Parents (52%) are more likely than non-parents (43%) to meet with neighbors face-to-face to discuss community issues, and there are no differences on this question based on geographic location—urban, suburban and rural adults are equally likely to have these face-to-face discussions. Additionally, internet users are no less likely than non-users to discuss community issues with their neighbors (indeed, 50% of internet users have done so, compared with 35% of non-users).

Just over one in ten email users (13%, representing 9% of all adults) exchanged email with their neighbors about community issues in the twelve months preceding our survey.2 Neighbor-to-neighbor communications via email are popular with many of the same groups that use face-to-face and telephone interactions:

Compared with telephone and in-person communication, racial differences are somewhat less pronounced when it comes to using email to communicate about neighborhood issues. Among email users 15% of whites and 9% of both African-Americans and Hispanics shared email with neighbors about community issues in the preceding year, differences that are not statistically significant. Similarly, there are no significant differences on this question based on geographic location.

Fourteen percent (14%) of internet users – or 11% of all American adults –  read a blog dealing with community issues in the twelve months preceding our survey, making community blogs as common as email communications as a way to keep up with neighborhood events. In contrast to face-to-face, telephone and email interactions, neighborhood blogs are relatively popular with young adults: 16% of online 18-29 year olds read a blog dealing with community issues, similar to the rate for those ages 30-64 (15%) and significantly higher than internet users 65 and older (9% of whom have done so).

Community blogs are particularly popular among residents of urban areas, as 17% of wired urbanites read a blog dealing with community issues. This is significantly higher than the 11% online rural residents who read such blogs. Online whites (14%), blacks (18%) and Hispanics (13%) are equally likely to read community blogs, and there is relatively little variation on this question based on income and education. 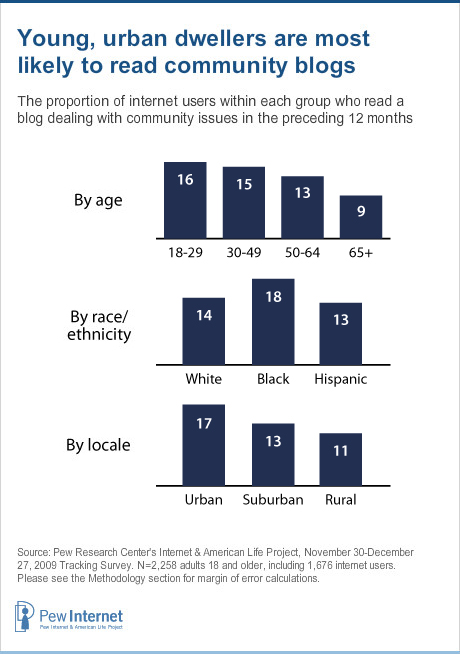 Nearly 70% of cell phone owners use their mobile devices to send text messages, yet texting is not currently a major tool for neighbor-to-neighbor interactions. Just 6% of these cell texters – or 4% of all American adults –  exchanged text messages with neighbors about community issues and events in the twelve months prior to our survey.

Among cell texters there are few major demographic differences on the use of text messaging for community purposes. Interestingly, 10% of African-Americans who use text messaging have texted with others in their neighborhood about community issues; this is among the highest rates of any demographic group, although it is not measurably different from the 6% of white texters who do so.

Nearly one in ten social network users (8%) joined an online group focused on community issues in the preceding twelve months—that works out to 5% of all internet users and 4% of all American adults. Social network users ages 18-29 (9%) and 30-49 (10%) are equally likely to join such groups, while those ages 50 and older (5%) are relatively unlikely to do so. Other than age, there is little variation within the social networking cohort when it comes to using these services to keep up with community events.

Among adults who use Twitter or other status update services, 14% use these sites to follow their neighbors—that works out to 3% of all internet users and 2% of all American adults. There are few demographic differences when it comes to following neighbors on status update services, although for many subgroups the sample size is too small to make detailed comparisons.

In addition to asking about communications practices, we also asked internet users whether they belong to a group email list, listserv or online discussion forum for their neighborhood. Seven percent (7%) of online adults – or 5% of all American adults –  said that they do belong to such a list or forum, a figure that is largely unchanged from the 5% of internet users who responded affirmatively when we last asked this question in July 2008.

Online groups and email lists are especially popular with college graduates and high income-earners. Among internet users, 13% of college graduates belong to this type of online forum (compared with 6% of those with some college experience and 3% of those with a high school degree or less); similarly, 15% of internet users with an annual household income of $75,000 or more belong to an email list or discussion forum, compared with just 2% of those with a household income of $50,000 or less.

Unlike the other ways of keeping up with community events we have discussed thus far, women are more likely than men to belong to online neighborhood groups—9% of online women are part of such a group, compared with 5% of men. There is also some variation around race and ethnicity: among internet users whites (8%) are more likely than Latinos (3%) to belong to such groups (8% of online African-Americans belong to a community forum or email list).

Participation in these groups is also more prominent in urban and suburban areas than in rural parts of the country. Among internet users 10% of urban residents, 7% of suburbanites and just 2% of rural dwellers belong to a neighborhood list. 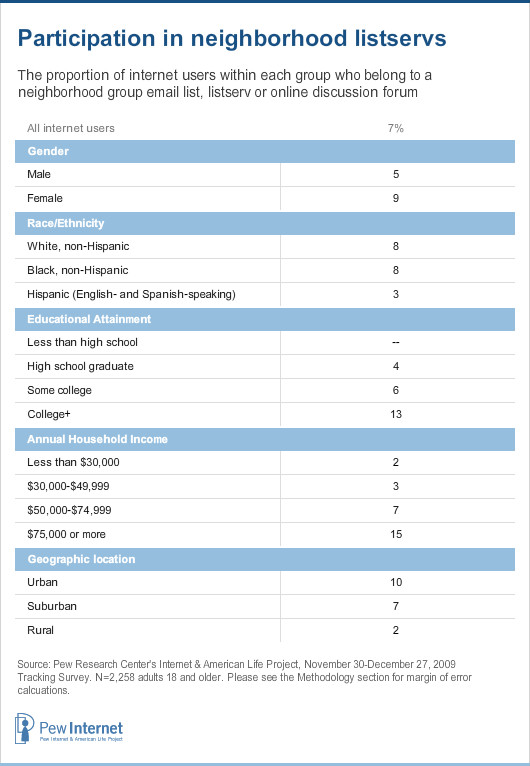 When it comes to learning about what’s happening in a community, the tools people use are associated with the people they know 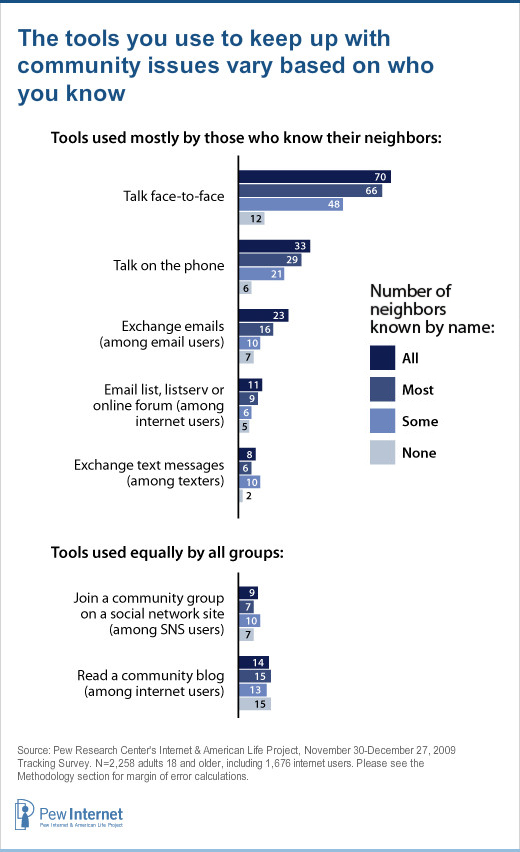 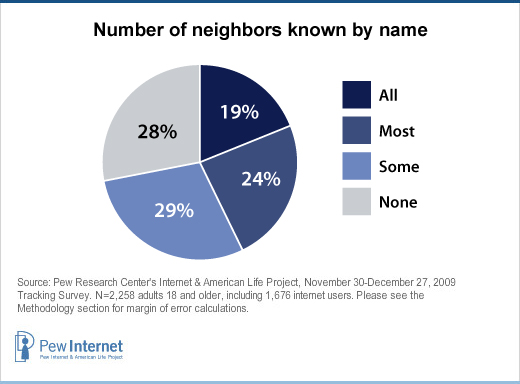 It is also notable that relatively large number of young adults and minority Americans use tools such as community blogs, social networking sites and text messaging to keep up with neighborhood events–especially since these groups are generally less likely than whites and older adults to talk about community issues via the telephone or face-to-face interactions.

Next: Part 2: Local information alerts
← Prev Page
You are reading page1Page2Page3
Next Page →