Over half of American adults play video games, and four out of five young adults play. Among adults, computers are the most popular gaming device, but among young adults gaming consoles are preferred. Virtual worlds only draw a small crowd.

Independent of all other factors, younger adults are considerably more likely than older adults to play games, and the likelihood that an adult is a video gamer decreases significantly with age. Fully 81% of respondents 18-29 years old play games, while only 23% of respondents 65 years old and older report playing games.

Overall, men (55%) are slightly more likely than women (50%), and urbanites (56%) are a bit more likely than rural-dwellers (47%) to play any kind of digital game. There is no significant difference in game playing across income groups or between suburbanites and adults from other locales.

A person’s education level is another predictor of video game play. Some 57% of respondents with at least some college education play games, significantly more than high school graduates (51%) and those who have less than a high school education (40%). Current students who are 18 or older are also avid players. Notably, 76% of students (82% of full-time and 69% of part-time students) report playing games, compared with 49% of non-students. 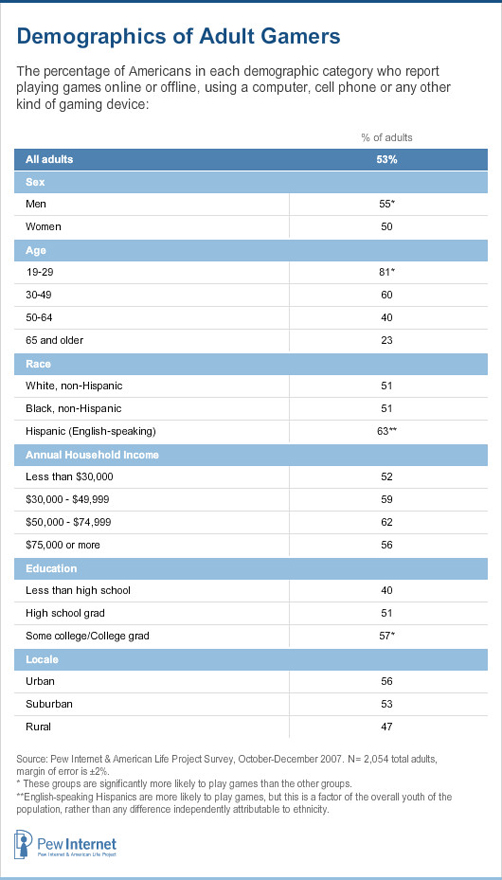 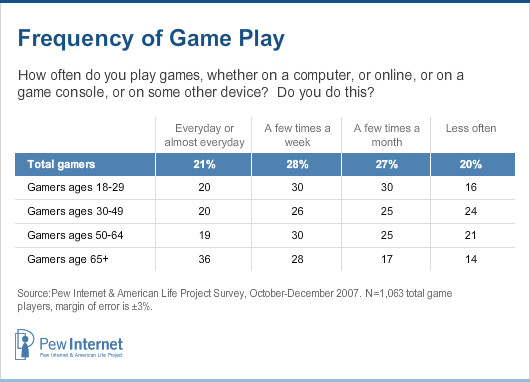 Almost half (49%) of all adult gamers reported playing games at least a few times a week.

Computers are the most popular equipment for video game play; consoles are the favorite gaming hardware among the youngest players.

Of the devices that can be used to play video games, computers are the most popular. Fully 38% of adults report playing games on desktop or laptop computers. This percentage compares with 28% who play on game consoles like an Xbox, PlayStation or Wii; 18% who play on a cell phone, Blackberry or other handheld organizer; and 13% who play on portable gaming devices like a PSP, DS or Gameboy. 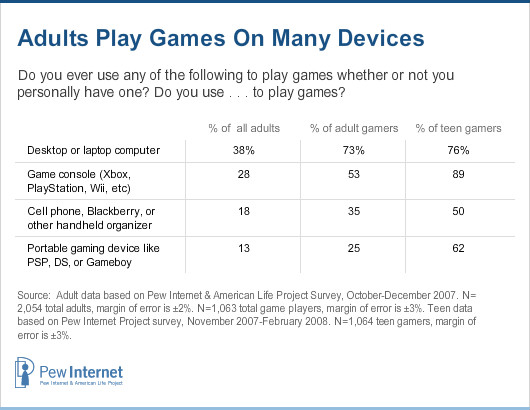 Like teens, a majority of young adults play games on consoles, while older gamers prefer computers. 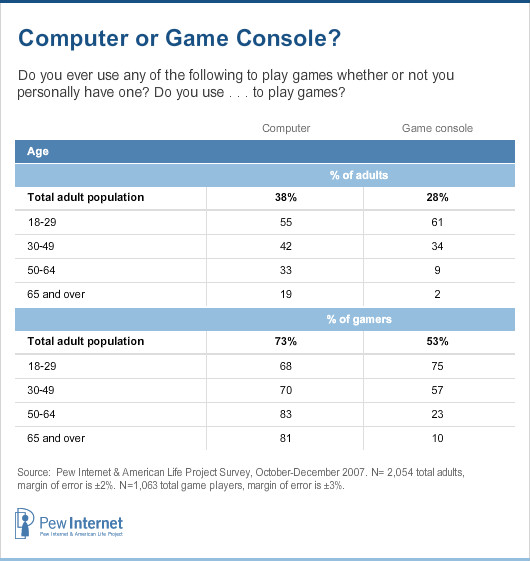 If an older person is going to play games, he or she will most likely use a computer. Some 19% of seniors 65 and older play games on computers, while only 2% use each of the other devices listed. Similarly, Americans ages 50-64 are much more likely to use computers than to use gaming consoles, cell phones (6%) or portable gaming devices (5%).

When looking specifically at gamers, these age-based preferences are even more distinct. Nearly three out of four gamers (73%) use computers to play, while just over half (53%) use game consoles. Gamers 50 and older are significantly more likely than younger age groups to use computers. Middle-aged gamers, 30-49 years old, prefer to play on computers, but a significantly large percentage also plays on consoles. Young adult gamers are the only age group to prefer playing on game consoles; three-fourths (75%) of 18-29-year-old gamers play on consoles.

Men are significantly more likely than women to play games on gaming consoles: 35% of adult men say they play games on a console compared with 21% of women. Men and women are statistically equally likely to use all other gaming devices, including computers, cell phones, handheld organizers and portable gaming devices. 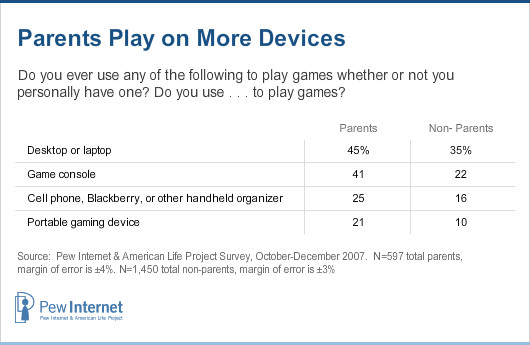 Online games have a modest place in the world of adult gaming.

Respondents who report playing games online tend to play more often than gamers who do not play games online. The majority (59%) of online gamers play at least a few times a week, significantly more than the 41% of strictly offline gamers who play that often. Those who play massive multiplayer online games (MMOGs),5 such as World of Warcraft, are even more likely to play frequently, as 89% play at least a few times a week.6 Nearly half (49%) of MMOG players play everyday or almost everyday, while just one in four online gamers (26%) and 17% of offline gamers play as often.

Virtual worlds and MMOGs have yet to catch on.

A total 6% of adults say they have created an avatar, or online representation of themselves often used for participation in virtual worlds and in some online games and social networks.

Slightly more game players, however, say that they have played MMOGs. Still, only 9% of gamers play these types of online games. Again, young adults are significantly more likely than average adults to play MMOGs, as 14% of 18-29-year-old gamers report playing these types of games. Teens are even more likely to play MMOGs, with 21% of teen gamers reporting MMOG play.

Next: About the Pew Research Center’s Internet & American Life Project
← Prev Page
You are reading page1Page2Page3Page4
Next Page →

Adults and Video Games
Over half of American adults play video games, and four out of five young adults play. Among adults, computers are the most popular gaming device, but among young adults gaming consoles are preferred. Virtual worlds only draw a small crowd.Older adult gamers play games more frequentlyComputers are the most popular equipment for video game play; consoles are the favorite gaming hardware among the youngest players.Like teens, a majority of young adults play games on consoles, while older gamers prefer computers.Certain demographic groups – men, minorities and parents – use some devices more.Online games have a modest place in the world of adult gaming.Virtual worlds and MMOGs have yet to catch on.
About the Pew Research Center’s Internet & American Life Project Questions and Data Methodology