American families are using a wide range of communication media to keep in contact with each other. Married couples with minor children stand out because they have higher rates of internet and cell phone usage, computer ownership and broadband adoption than other household configurations.

For today’s married-with-children households, ownership of multiple gadgets and communication tools is a standard feature of family life:

Although some commentators have expressed fears that technology pulls families apart, this survey finds that couples use their phones to connect and coordinate their lives, especially if they have children at home. American spouses often go their separate ways during the day, but remain connected by cell phones and to some extent by internet communications. When they return home, they often have shared moments of exploration and entertainment on the internet.

This new connectedness via cell phone and screen-sharing is correlated with some benefits for family life. For example, those with the most technology are more likely to share moments with family members while they are online and to exchange some kinds of family communications such as checking in with other family members and coordinating activities.

At the same time, this is a different kind of connectedness from the past because those who have the most technology are more likely to live in dual-income households and also more likely to report that they are working longer hours, in part because of their use of the internet. Those with multiple communication devices are somewhat less likely to eat dinner with other household members and somewhat less likely to report high levels of satisfaction with their family and leisure time than are families with lower levels of technology ownership.

The cell phone affords extra contact, especially for couples who want to touch base and need to coordinate their busy lives.

There has been a major swing to cell phone use among American couples; more use a cell phone to be in touch daily than a traditional landline phone. Some 47% of married couples contact each other once a day or more using a cell phone, and 35% do so using a landline phone. Couples use communication technologies such as the internet and cell phones primarily to say hello and chat and to coordinate schedules and daily routines when they are physically separated. Cell phones also seem to increase the frequency of certain kinds of communications between couples. Compared with less tech-heavy households, married couples in which both partners go online or use a cell phone contact each other more frequently than couples who have less technology.

Parent-child communications, particularly on a daily basis, are similarly dominated by the telephone: 42% of parents contact their child/children daily using a cell phone, and 35% do so using a landline telephone.

The internet enables shared “Hey, look at this!” experiences.

Although families often have the means to retreat to their technological “neutral corners” and engage in screen time in isolation, many go online with others. Some 52% of internet users who live with a spouse and one or more children go online with another person at least a few times a week. Another 34% of such families have shared screen moments at least occasionally.

Additionally, families that own large quantities of televisions and computers are no less likely to share screen time with other family members than those families that have lower levels of technology ownership.

A majority of adults say technology allows their family life today to be as close, or closer, than their families were when they grew up.

While new communication technologies have increased the amount of time some people spend at the office or working from home, few people see them as having a negative impact on family closeness.

People say that new communication tools help them stay connected with friends and family, although their use has blurred traditional lines between “work” and “home.”

Overall, respondents in this survey see much upside and little downside in the way new communication technologies, such as the internet and cell phones, have impacted the quality of their communications with others.

Furthermore, 33% of internet users say that the internet has improved their connections to friends “a lot,” and 23% say it has increased the quality of their communication with family members by a similar amount. They say these improvements are particularly useful for keeping in touch with extended family members who may live many miles away. Young people in particular take advantage of the social side of the internet: 21% of wired 18-29 year olds say the internet has greatly improved their ability to meet new people, and 49% say it has improved their connections to friends a lot.

Many people spend less time watching television thanks to the internet.

As people spend more time working, they are less satisfied with the amount of time they can spend on their hobbies or relaxing. 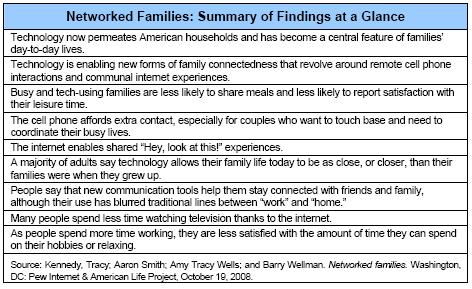