83% of online Americans have used the internet to pursue their hobbies; The size of the daily online hobbyist population has increased substantially in the past five years.

Sara Greenleaf had taken up genealogy after she inherited her grandmother’s family history files. Thanks to the internet, instead of spending time in dusty archives, she has been able to gather evidence and make connections from her desktop, particularly since she has the good luck of unusual ancestral names. One day, while preparing a scrapbook on her Welsh ancestors, she typed her great-grandfather’s name, Gouverneur Cadwalader, into a search engine and found a cameo portrait of her great-great-great-grandmother on a website based in New Zealand.1 She happened to be named Maria Charlotte Gouverneur Cadwalader.

Greenleaf is one of the respondents to a survey posted on the Pew Internet Project website that collected stories about how the internet has had an impact on people’s hobbies and her experience is far from unique. The internet has become a hobbyist’s playground. A telephone survey conducted in February-March 2007 found that fully 83% of online Americans say they have used the internet to seek information about their hobbies and 29% do so on a typical day. Looking for information about hobbies is among the most popular online activities, on par with shopping, surfing the web for fun, and getting news.

The internet’s effect on hobbies can range from being an integral research tool for a genealogist, like Greenleaf, to being a connection and communication tool for collectors, to being the very source of a hobby’s existence, as in the case of online gaming. Regardless of the internet’s role in the hobby, its impact is clear. 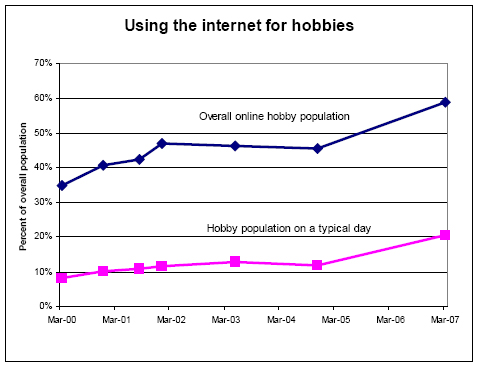 The 2007 survey data also marks a major increase from November 2004, the most recent time before February that we asked about hobbies. In that prior survey, 77% of internet users said they had used the internet to search for information about a hobby and 20% of internet users did so on a typical day.

Who uses the internet for hobbies

Men, internet users under age 50, and those with home broadband connections are among the most likely groups to pursue their hobbies online.

Connection speed matters, too. Broadband continues to spread into people’s homes,2 deepening their reliance on the internet in many ways, including the pursuit of hobbies. Fully 89% of respondents with a broadband connection at home report using the internet to find information about hobbies. However, it is important to note that eight in ten home dial-up users (78%) go online for information about their hobbies – further evidence of this activity’s wide appeal. 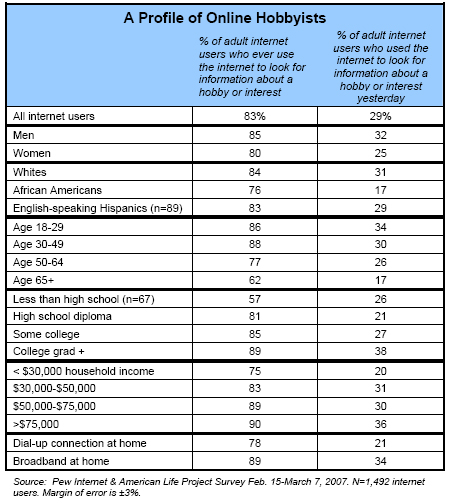 Demographic differences are more pronounced among those who said they went online for hobby information “yesterday” – that is, the day before they were contacted for this survey. On a typical day, one-third of online men, one-third of internet users in their 20s, and 38% of college-educated internet users pursue hobbies online.

Variety is the spice of online life

Through a survey posted on our website, the Pew Internet Project collected stories about how the internet had an impact on people’s hobbies. Here are some examples:

Online hobby research can inspire a person to travel, through activities like historical tourism, or inspire new experiences at home, like cooking or gardening. The internet can provide detailed information about even the most obscure hobby and can connect hobbyists of every stripe. Taxidermists can find just the right glass eye to complete a stuffed owl. Collectors can scour far-away troves to find that one quilt, stamp, comic book, or baseball card they desire.

The internet has also led to the creation of entirely new hobbies, as in the case of Geocaching – a hide-and-seek type of game using an interactive website and GPS technology.3 Keeping a multimedia diary in the form of a blog is another uniquely online pursuit.4

This growing use of the internet for hobby information tracks a trend we have seen in other surveys.

In a survey completed in March 2005, we asked all Americans if they had started a new hobby or became more involved with a hobby within the previous two years. Some 27% of internet users said they had and, of those, 28% said the internet played a crucial or important role as they delved into the hobby. Online men and those under age 30 were the most likely to report a major internet impact on their hobby. We got a similar result in a survey in February 2002.

The Pew Internet Project is a nonprofit initiative of the Pew Research Center and is funded by The Pew Charitable Trusts to examine the social impact of the internet. The project is non-partisan and does not advocate policy outcomes: https://www.pewresearch.org/internet/

Hobbyists Online
83% of online Americans have used the internet to pursue their hobbies; The size of the daily online hobbyist population has increased substantially in the past five years.
Questions and Data