The number of Americans using the internet as their main source of political news doubled since the last mid-term election.

The number of Americans who got most of their information about the 2006 campaign on the internet doubled from the most recent mid-term election in 2002 and rivaled the number from the 2004 presidential election year.

In all, 15% of all American adults say the internet was the primary source for campaign news during the election, up from 7% in the mid-term election of 2002 and close to the 18% of Americans who said they relied on the internet during the presidential campaign cycle in 2004. 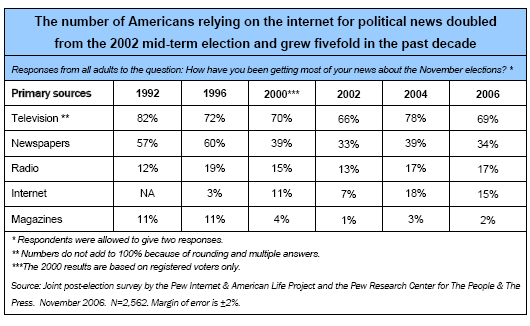 31% of Americans used the internet during the 2006 campaign to get political news and information and discuss the races through email.

The growing importance of the internet in political life is tied at least in part to the spread of broadband connections in American homes. From November 2002 to November 2006, the share of adult Americans with high-speed connections at home grew from 17% to 45%. These “always on” internet connections draw people to online news of any kind, political news included.

While television and newspapers still dominate political communication for the majority of Americans, there is now a group of citizens who use the internet more than newspapers. They are relatively young – under 36 years old – and they have broadband connections at home. Some 35% of those in that cohort say the internet was their main source of political news during the 2006 campaign, compared with 18% who cite newspapers. For older broadband users, the internet still seems to be a supplemental source of political information and activity.

For the first time in our politics and the internet surveys we asked respondents whether they had created and shared political content and found:

In all, 23% of campaign internet users (or 11% of internet users and 7% of the entire U.S. population) had done at least one of those things. That translates into about 14 million people who were using the “read-write Web” to contribute to political discussion and activity.

For most, the internet’s value lies in its convenience. But many also cite its virtues as a source of information beyond that which is available in other media.

Republicans and Democrats were equally likely to rely on the internet – but there were partisan trends in usage of other political news sources.

Republican and Democratic voters were equally likely to say that the internet was their main source of election news (17% among each group). Seen a somewhat different way, the internet news audience for the 2006 race was no different in its vote preferences than the public as a whole.

In contrast, there were notable differences between Republican and Democratic voters in their preferences for other news sources. For instance, Democratic voters were more likely than Republicans to cite newspapers and certain broadcast and cable news operations such as CBS, ABC and CNN as their main sources of news, while Republicans were more likely to favor the Fox cable TV News and radio. 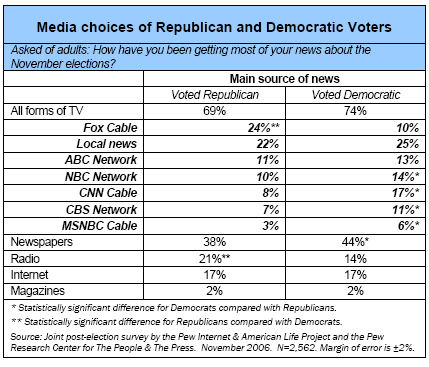 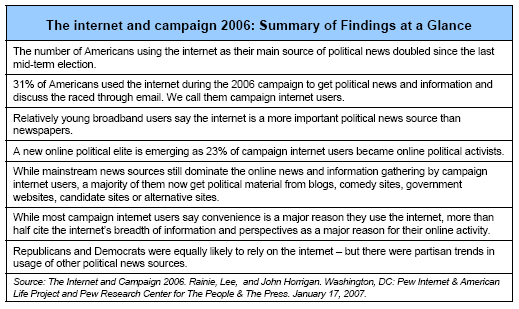 Election 2006 Online
Acknowledgments Part 1. The Media Landscape for Politics in 2006 Part 2. The Role of the Internet in the 2006 Election Cycle Part 3. Republicans, Democrats and the Internet Methodology