26 million Americans were logging onto for news or information about the campaign on a typical day in August, the highest such figure recorded by the Pew Internet Project

On a typical day in August, 26 million Americans were using the internet for news or information about politics and the upcoming mid-term elections. That corresponds to 19% of adult internet users, or 13% of all Americans over the age of 18.

This is a high-point in the number of internet users turning to cyberspace on the average day for political news or information, exceeding the 21 million figure registered in a Pew Internet Project survey during the November 2004 general election campaign.1

Comparing August 2006 figures to a similar point in the 2002 mid-term election cycle is particularly revealing. In July 2002, approximately 11 million Americans, or 13% of online users, said they got some news or information about politics and the campaign from the internet on the average day. The August 2006 number is nearly two-and-a-half times larger than the mid-summer 2002 figure.

Comparing use of the internet for political news
during mid-term elections, 2002 and 2006 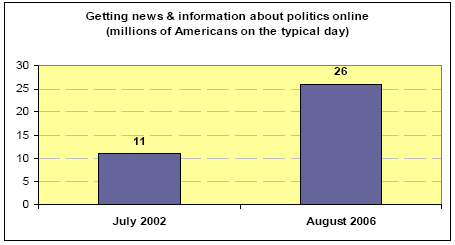 The rising use of the internet to get political information is notable for two reasons. First, the telephone survey that captured the finding was conducted in August, usually a month of relative quiet in the political world. Second, mid-term elections campaigns usually draw much less public interest than those that take place in presidential election years.

Any number of reasons could be behind the increase in people turning to the internet for news about politics and the mid-term election campaign. More attractive internet content about politics – from established news organizations, campaigns, independent media, and interested citizens – may have drawn more users to the Web for this information.

Changing internet adoption patterns since 2002 also has something to do with the growth in the number of people turning to the internet for political news. More people are online today than in 2002. In July 2002, 59% Americans identified themselves as internet users, a figure that rose to 68% in August 2006. The means of access changed as well. Just 12% of adult Americans had high-speed internet connections at home in July 2002, less than a third of the figure in our August 2006 survey, when 41% of U.S. adults said they had broadband internet connections at home. Having a home broadband connection tends to draw users to the internet for their information needs. Absent the increase in home broadband penetration that occurred between 2002 and 2006, we estimate that use of the internet for news and information about politics would be approximately 30% lower than our August 2006 figures show.2

Different levels of interest in the campaign in 2006 compared to 2002 are probably not much of a factor behind the increase. In June 2006, 38% of registered voters said they were more enthusiastic than usual about voting this year, slightly lower than the 41% of registered voters who said this in June 2002.3

These results come from a nationally-representative telephone survey by the Pew Internet & American Life Project from August 1 – August 31 of 3,001 adults. The portion of the survey that covered political activity online was administered to 1,021 internet users. The margin of error on the internet sample is plus or minus 3.5 percentage points.