The Next Ten Years

A broad-ranging survey of technology leaders, scholars, industry officials, and interested members of the public finds that most experts expect attacks on the network infrastructure in the coming decade. Some argue that serious assaults on the internet infrastructure will become a regular part of life.

In September 2004, the Pew Internet Project sent an email invitation to a list of respected technology experts and social analysts, asking them to complete a 24-question survey about the future of the internet. We also asked the initial group of experts to forward the invitation to colleagues and friends who might provide interesting perspectives. Some 1,286 people responded to the online survey between September 20 and November 1, 2004. About half are internet pioneers and were online before 1993. Roughly a third of the experts are affiliated with an academic institution and another third work for a company or consulting firm. The rest are divided between non-profit organizations, publications, and the government.

This survey finds there is a strong across-the-board consensus that the internet will become so important to users in the coming decade that the network itself will become an inviting target for attack. By a nearly 3-1 margin, the experts in this survey expressed worry about the vulnerability of the internet and the likelihood of an attack on the underlying infrastructure within the next ten years.

Some 66% agreed with the following prediction: At least one devastating attack will occur in the next 10 years on the networked information infrastructure or the country’s power grid. As one expert wrote, “A simple scan of the growing number and growing sophistication of the viral critters already populating our networks is ample evidence of the capacity and motivation to disrupt.” Eleven percent disagreed with the prediction and 7% challenged it, including some who argued that they did not expect any attack to be serious enough to involve loss of life or a very long outage.

The internet will be more deeply integrated in our physical environments and high-speed connections will proliferate – with mixed results.

There was little disagreement among experts that broadband adoption will grow and that broadband speeds will improve. Nor was there much doubt that vastly more people and objects would be linked online in the next decade. Experts envision benefits ranging from the ease and convenience of accessing information to changed workplace arrangements and relationships. At the same time, a majority of experts agreed that the level of surveillance by governments and businesses will grow.

A full table of predictions and experts’ reactions is on page vi of this report. Some of the highlights:

Finally, the experts were relatively unconvinced about two suggested impacts of the internet related to democratic politics and processes:

In the emerging era of the blog, experts believe the internet will bring yet more dramatic change to the news and publishing worlds. They predict the least amount of change to religion.

Here are examples of experts’ reflections:

(A full table of their assessment of institutional change is on page v of this report.)

Experts are both in awe and in frustration about the state of the internet. They celebrate search technology, peer-to-peer networks, and blogs; they bemoan institutions that have been slow to change.

We asked the experts to tell us what dimensions of online life in the past decade have caught them by surprise. Similarly, we asked about the changes they thought would occur in the last decade, but have not really materialized. Their narrative answers could be summarized this way:

These survey results and written commentary from experts add to a growing database of predictions and analysis from trendsetters about the impact of the internet.

At the invitation of the Pew Internet & American Life Project, Elon University assistant professor Janna Quitney Anderson formed a research class in the spring semester of 2003 to search for comments and predictions about the internet during the time when the World Wide Web and browsers emerged, between 1990 and 1995. The idea was to replicate the fascinating work of Ithiel de Sola Pool in his 1983 book Forecasting the Telephone: A Retrospective Technology Assessment. Elon students looked in government documents, technology newsletters, conference proceedings, trade newsletters and the business press. Eventually, more than 1,000 people were logged in the predictions database and more than 4,000 predictions were amassed. The fruits of that work are available at: http://www.elon.edu/predictions/ and they are also the basis for a forthcoming book by Anderson called Imagining the Internet.

The material from this survey is being added to the database. We hope the database will provide a resource for researchers and students to assess the evolution of the internet. Further, we invite readers of this report to enter their own predictions at that site. 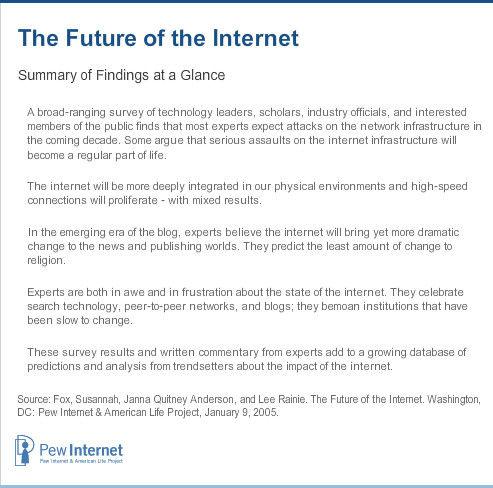 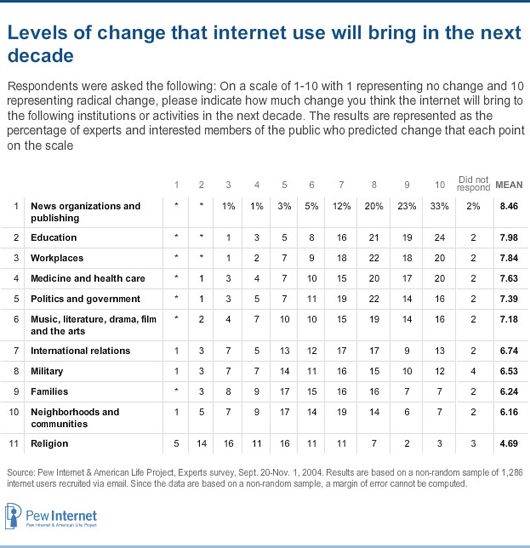 A table summarizing the results of a wide-ranging survey in which technology leaders, scholars, industry officials, and interested members of the public assess the future of the internet.

Emerging TechnologyFuture of the Internet