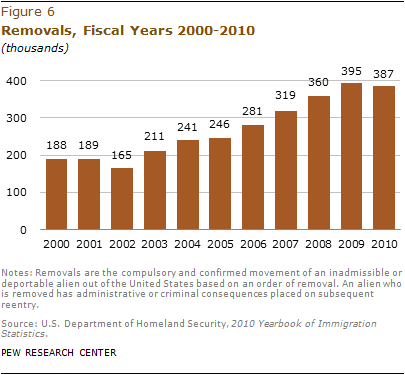 In recent years, deportations of immigrants have reached record levels—nearly 400,000 a year during the Obama years, according to the Department of Homeland Security (2011a). This is 30% more than the 300,000 deported annually on average during the second term of the Bush administration. And it is nearly twice as many as the 200,000 deportations that occurred annually on average during Bush’s first term.

The U.S. Department of Homeland Security uses the term “removal” rather than “deportation”4 to describe the actions of its Immigration and Customs Enforcement (ICE) and Customs and Border Protection (CBP) divisions to expel a foreign national from the U.S. Each expulsion is based on an “order of removal” issued by an immigration court or by the Department of Homeland Security.5 Reasons for an order of removal are either inadmissibility or the deportability of a foreign immigrant.

Country of Origin of Deportees 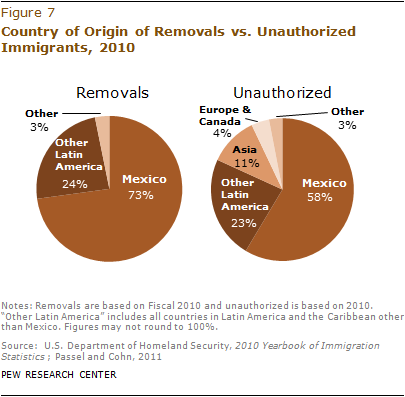 In 2010, deportees of Hispanic origin made up 97% of all deportees (U.S. Department of Homeland Security, 2011a). Mexican immigrants alone accounted for nearly three-fourths (73%) of deportees in fiscal 2010. An additional 24% were from countries in Latin America other than Mexico, including Guatemala (8%), Honduras (6%) and El Salvador (5%).

According to Pew Hispanic Center estimates, Hispanics make up 81% of the nation’s 11.2 million unauthorized immigrants (Passel and Cohn, 2011)—a share 16 percentage points lower than that among all deportees. Most of this differential arises from the disproportionate deportation of Mexican immigrants. Among the nation’s unauthorized immigrants, 58% are from Mexico, 15 percentage points lower than their share among all deportees.

The overall increase in deportations during the Obama administration has been fueled in part by an intensified focus on deporting immigrants convicted of a crime. The number of criminal deportees rose from 105,000 in 2008 to 169,000 in 2010—an increase of 61%. As a share of all deportees, convicted criminals comprised 44% in 2010, up from 29% in 2008 (U.S. Department of Homeland Security, 2011a). 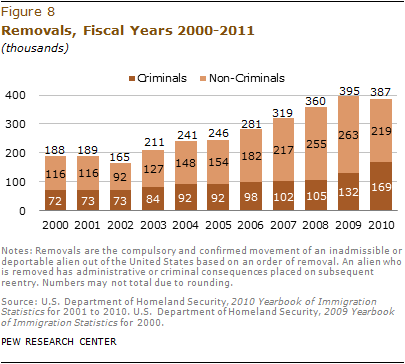 The rising number of criminal deportees has been bolstered by programs administered by Immigration and Customs Enforcement to identify and apprehend deportable criminal convicts. These programs, such as the Criminal Alien Program (CAP), Secure Communities and 287(g), are administered in partnership with state and local law enforcement authorities. 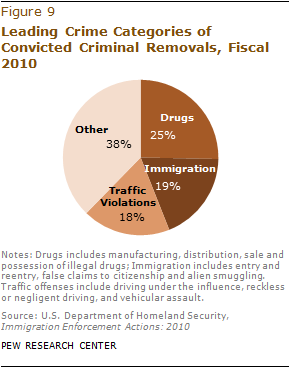 Criminal deportees have been found guilty of a wide range of offenses. In 2010, one-fourth (25%) of such deportees were convicted of drug-related offenses, 19% of immigration offenses and 18% of criminal traffic violations such as DUI, reckless driving or vehicular assault. Together, these three offense categories made up the majority of all criminal deportations (62%). 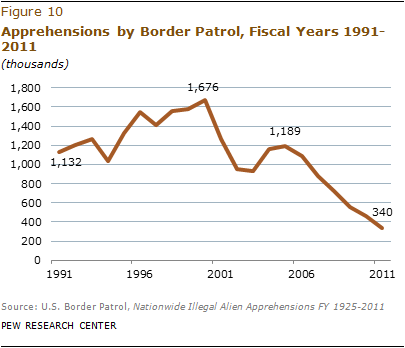 Border apprehensions have fallen significantly in recent years, according to the U.S. Border Patrol (2011). In 2005, the Border Patrol reported nearly 1.2 million apprehensions of unauthorized border crossers. In 2011, that had fallen to 340,000—a drop of more than 70%. This decrease appears to be the result of a sharp reduction in the inflows of unauthorized immigrants since the middle of the last decade (Passel and Cohn, 2010).

Besides greater enforcement by ICE, it is possible that some of the statistical increase in deportations in recent years is the result of administrative changes in the way that unauthorized immigrants apprehended at the border are processed. After being caught by the Border Patrol, an unauthorized immigrant can be processed either as a “voluntary return” or a “removal.” For many years, most illegal border crossers were quickly processed and returned to Mexico—and thus never counted as deportees. However, in recent years a growing share of persons apprehended at the border have been issued an official order of removal6 and thus been counted as deportees in official statistics.

Next: III. Awareness and Views of Immigrant Deportations
← Prev Page
Page1You are reading page2Page3Page4Page5Page6Page7Page8Page9
Next Page →