For more than a decade, the Census Bureau has been developing an alternative measure of poverty that is intended to better reflect the costs of basic living expenses as well as the resources people have to pay them. The bureau has just released results for 2010 from the alternative metric—called the Supplemental Poverty Measure (SPM)—that uses a wider range of factors than the official federal measure to determine poverty status. 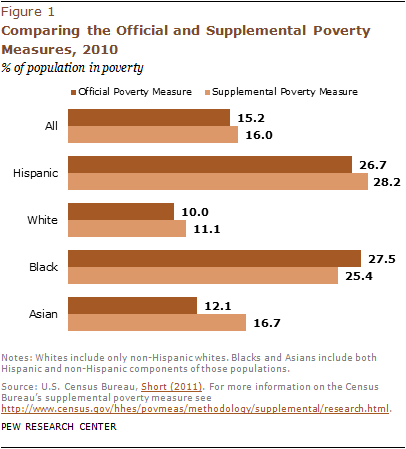 The additional data used in the alternative measure include medical expenses, tax credits, non-cash government benefits (such as food stamps, housing subsidies and school lunch programs) and cost-of-living adjustments for different geographic areas. The alternative measure is not intended to replace the official poverty measure, at least for now. For the foreseeable future, the Census Bureau will report two sets of numbers.

When the alternative measure is used, a greater share of Hispanics in 2010 lived in poverty than any other group. By contrast, when using the official poverty rate, a greater share of blacks in 2010 lived in poverty than Hispanics or any other group. Even so, no matter which measure is used, Hispanics make up nearly three-in-ten of the nation’s poor—28.6% under the official poverty measure and 28.7% under the SPM.

The nation’s youngest and oldest age groups also show notable differences in their poverty rates depending on whether the official measure or the SPM is used. For children younger than 18 in 2010, the SPM poverty rate was lower than the official poverty rate—18.2% versus 22.5%.4 For the elderly, by contrast, the SPM poverty rate was higher than the official poverty rate—15.9% versus 9.0%. One explanation of the difference for children is that the SPM, but not the official measure, accounts for the in-kind benefits of government programs that target families with children, according to the Census Bureau. One explanation of the higher poverty rates for the elderly shown in the SPM, according to the bureau’s analysis, is that the alternative measure incorporates out-of-pocket spending on health care costs.

The SPM, which was developed by the Census Bureau and Bureau of Labor Statistics5, will not replace the official measure of poverty that has been used since the 1960s. The federal government’s official poverty measure defines thresholds based on the cost of a basket of food, adjusted for householder age, family size and composition. These costs are compared with before-tax cash income (including Social Security payments and cash welfare grants) to determine poverty status.

The alternative poverty measure, by contrast, starts with the cost of a basket of food, clothing, shelter and utilities, and adjusts it based on a wider range of family types and housing costs in different areas. The SPM also accounts for a larger range of financial resources, adding the value of non-cash benefits such as food stamps and subsidies for school lunches, housing costs and energy bills, while subtracting expenses such as taxes, child care costs and out-of-pocket spending for medical bills.

Childhood Poverty Among Hispanics Sets Record, Leads Nation
U.S. Foreign-Born Population: How Much Change from 2009 to 2010?
How Many Hispanics? Comparing Census Counts and Census Estimates
A Demographic Portrait of Puerto Ricans
Latinos and the 2010 Census: The Foreign Born Are More Positive
Defining generations: Where Millennials end and Generation Z begins
Growing Share of Americans Say They Plan To Get a COVID-19 Vaccine – or Already Have
Quiz: Are you a Core Conservative? A Solid Liberal? Or somewhere in between?
Most Americans Support Tough Stance Toward China on Human Rights, Economic Issues
In their own words: What Americans think about China