It is well known that the nation’s young adult population is increasingly Hispanic. In October 2010, one-third of 18- to 24-year-olds were either Hispanic or black. These minority groups have below-average high school completion rates. As minorities have become a greater share of young adults, some may reason that average educational attainment would decline as a result. Perhaps, but this has not occurred in regard to high school completion. In October 2010, 85% of all 18- to 24-year-olds had completed high school (via diploma or GED), the highest level ever recorded.

One direct factor bolstering college enrollment is that a greater share of youths than ever in the past 43 years are eligible to pursue college degrees. 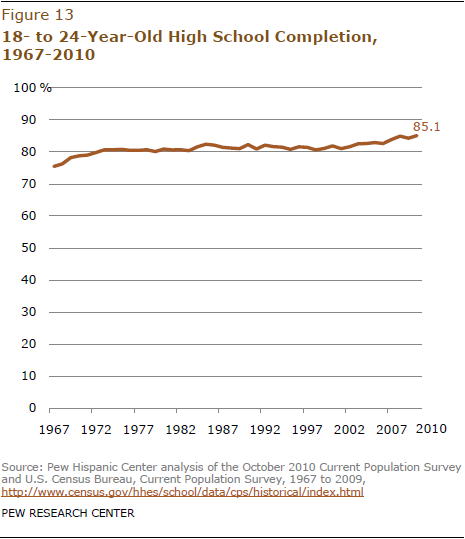 Related to youths’ decisions to both finish high school and enroll in college is labor market opportunity. For some youth, work may be an alternative to schooling. Although the Great Recession officially ended in June 2009, employment opportunities continue to be depressed for young adults in many areas of the country. The share of 20- to 24-year-olds who are employed hit bottom at 60.0% in the first quarter of 2010. By the fourth quarter of 2010, it had risen to only 60.3% and hence some young adults may be pursuing college because they cannot find work. 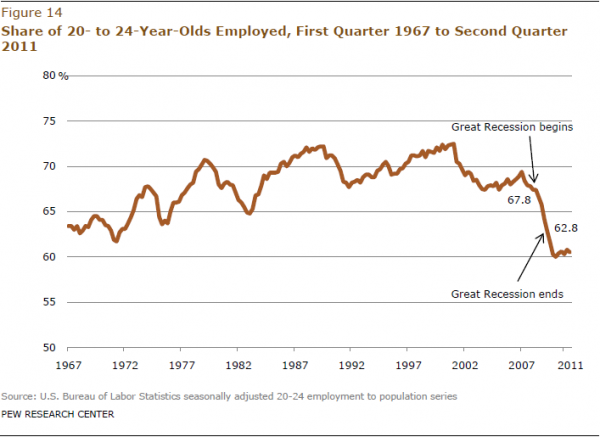 Returns to College in the Labor Market

A possible long-run factor that may be boosting young adults’ propensity to pursue college is the increased value of a college education in the labor market. In the face of rising college tuitions and increased student borrowing, students and their families may be assessing whether pursuing college is worth it (Pew Research Center, Social & Demographic Trends, 2011). And it is true that the nation is producing more college graduates than ever before. Similar to the enrollment trends documented in this report, the share of 25- to 29-year-olds who have completed at least a bachelor’s degree (nearly a third) reached its highest level ever in 2010 (National Center for Education Statistics, 2011a).

In spite of the rising supply of college-educated workers, employers continue to pay the typical young worker with a college degree about 50% more than the typical young worker whose educational attainment was a high school diploma. There was a major run-up in the earnings return to college during the 1980s, and the college premium has stabilized around 50% since the early 1990s. Some analyses even suggest that the earnings return to college has modestly increased since the early 1990s (Goldin and Katz, 2009). So, at least in terms of the typical pay of college graduates versus high school graduates, a college education has not lost its luster. 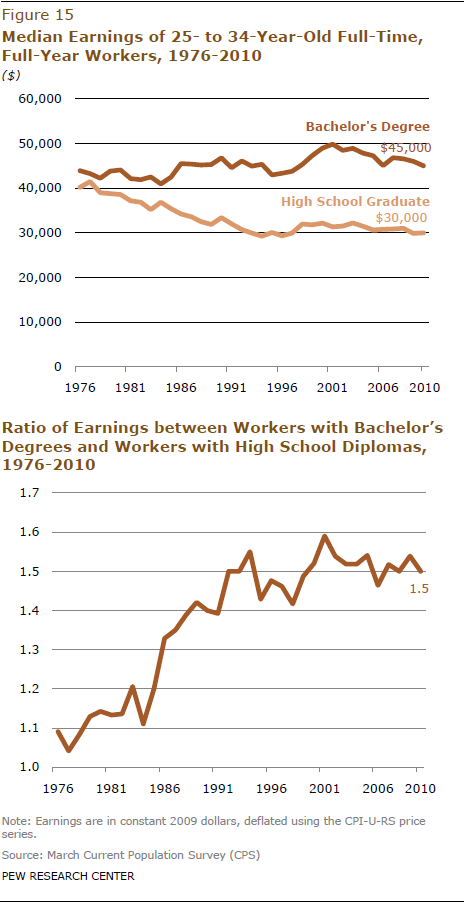