A foreclosed home is a visible symbol of today’s housing crisis. The number of homes in the United States with at least one foreclosure filing increased from 717,522 in 2006 (0.6% of all housing units) to 2,330,483 in 2008 (1.8% of all housing units). Latest reports from RealtyTrac® show that the number of properties entering foreclosure continued to increase through the first quarter of 2009.37 With no signs of an end to the recession, it is likely that foreclosure activity will stay at a high level into the near future.

This section focuses on the geography of foreclosures—how the rate differs across U.S. counties—and the role of demography in explaining those differences. A specific question of interest is whether the increased presence of minority or immigrant residents in a county is associated with a relatively high foreclosure rate. The question arises because several states with higher than average foreclosure rates, such as California, Nevada, Arizona and Florida, are also home to large numbers of Latinos and immigrants.

Unfortunately, the available data do not identify the race, ethnicity or nativity of owners whose homes are foreclosed upon. Thus, it is not possible to know directly whether a county’s high foreclosure rate correlates to a high share of residents with above-average risks of foreclosure. Of course, foreclosure rates also depend on economic factors, such as unemployment, home price depreciation, housing affordability and the prevalence of higher-priced lending. The goal of the analysis is to discern the nature of the relationship between foreclosures and demographic factors independent of the influence of economic factors.

The analysis finds that higher shares of immigrant residents in counties are associated with higher rates of foreclosure. Local economic conditions, including unemployment rates, are also an important determinant of foreclosures. Home prices that fall, or that rise slower, are also estimated to raise foreclosure rates. Other key factors include local housing costs and a greater incidence of higher-priced lending to blacks and Hispanics.

Data from a number of sources are compiled to address the principal question of this section. Foreclosure rates by county were provided by RealtyTrac®. Demographic data for counties were derived from the Census Bureau’s three-year file of the American Community Survey (ACS). This file combines ACS data from 2005, 2006 and 2007 and was used to determine the race, ethnicity, nativity and homeownership status of householders at the county level.38

With regard to economic data, local area unemployment statistics are from the Bureau of Labor Statistics (BLS) and home prices are from the Federal Housing Finance Agency (FHFA).39 Home Mortgage Disclosure Act (HMDA) data are the source of information on higher-priced lending and loan-to-income ratios in U.S. counties.

The foreclosure crisis has distinct epicenters in the U.S. The foreclosure rate equals or exceeds the national rate in fewer than 10% of the nation’s counties: 270 of 3,141 counties had a foreclosure rate of 1.8% or higher in 2008. The vast majority of those counties—207 of 270—are located in a handful of states (Map 1). California and its neighbors to the east (Arizona and Nevada) and the manufacturing belt (Ohio, Michigan, Indiana and Illinois) comprise two hot spots. Other states with high foreclosure rates are Florida, Georgia, Virginia and Colorado.

In contrast, most of the nation’s counties experienced few foreclosures in 2008. In 2,164 counties, the foreclosure rate was 0.5% or less (Table 10). That total includes 382 counties in which no properties entered into foreclosure proceedings in 2008. 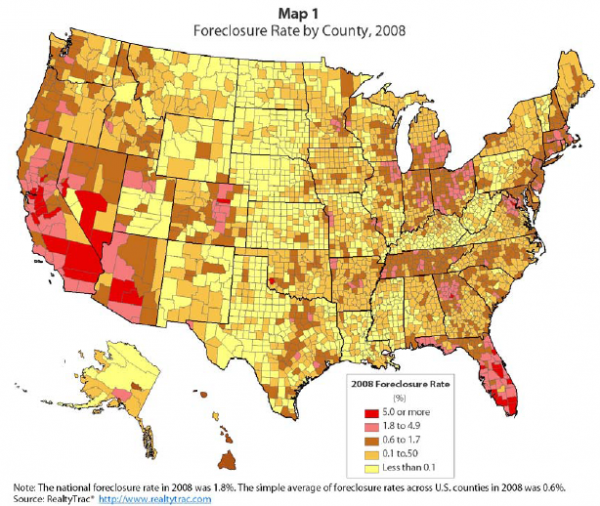 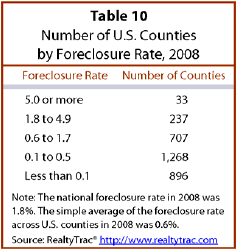 The foreclosure rate in a county may be high for any number of reasons. A weak economy may raise unemployment, making it harder for some to make mortgage payments. Falling home prices may turn home equity negative, giving homeowners an incentive to default on their loan. Other owners may simply fail to keep up with payments because high home prices or the terms of their loan pushed their debt into unsustainable levels.41

The minority or immigrant status of homeowners in a county may also determine the risk of loan default and foreclosure. The income and employment status of those households may be more volatile than average (Freeman and Rodgers, 2005; Council of Economic Advisers, 1999). Minority and immigrant households are also known to have only a fraction of the assets owned by white households, leaving them more vulnerable to economic shock (Kochhar, 2004). Participation in financial markets is also more limited among immigrants than among the general population (Osili and Paulson, 2006). Therefore, the demographic makeup of a county may be related to foreclosure risk independent of general economic conditions.

But there are large differences across areas on most measures. The unemployment rate in 2008 was as low as 1.2% in Slope County, N.D., and as high as 22.9% in Imperial County, Calif. The share of foreign-born residents in a county’s population varies from less than 0.5% in places such as Jackson County, Ohio, to 60.7% in Miami-Dade County, Fla. Similarly, the share of Latinos in county populations ranges from less than 1% in places including Kennebec County, Maine, to 93.0% in Webb County, Texas.

Moreover, several states with large numbers of Hispanics and immigrants or states that are new destinations for these groups are home to numerous counties with relatively high foreclosure rates. California, Florida, Arizona, Nevada and New Jersey are prominent in this regard. These five states accounted for 47.2% of the U.S. Hispanic population in 2007, compared with 24.1% of the overall population. Also, the vast majority of counties in these states—157 of 178—had foreclosure rates higher than 0.6%, the simple average of the rate across all U.S. counties.

This study uses a multivariate regression model43 to determine how the variation in foreclosure rates across counties in 2008 is associated with each of the following factors: the share of the population in the county that is minority or foreign born; the homeownership rate in the county among minority and immigrant populations; the county unemployment rate in 2008; the change in home prices from 2005 to 2007; the average home purchase loan-to-income ratio in the county in 2006 (a measure of housing affordability); and the share of home purchase loans to Latinos, blacks and whites that were higher priced in 2006.44 The analysis encompasses about 1,000 counties for which data on all variables were available.45 The limiting factor was the availability of data on home prices.

Tables A1 to A4 in Appendix A show how those factors appear in the 33 counties whose foreclosure rate in 2008 exceeded 5%. The concentration of immigrants and Latinos in these counties is generally above average. For example, 22.9% of the householder population in Clark County, Nev., is foreign born (Hispanic and non-Hispanic), compared with 4.7% in the average county and 13.2% in the nation. The homeownership rate among immigrants and Latinos is also above average in these counties. Thus, if default risk is elevated in minority and immigrant populations in these counties, it transmits with greater force into the foreclosure rate.

The unemployment rate in the 33 counties is also relatively high. The rate in four California counties—Merced, Yuba, Stanislaus and San Joaquin—exceeded 10% in 2008. The change in home prices from 2005 to 2007 was negative in the majority of counties in the table, including in the 12 California counties. Housing affordability was an issue, as the loan-to-income ratio was 3.0 or greater in 19 counties.

Similarly, higher-priced lending to Latinos and blacks was more prevalent in these counties than average.
The regression analysis finds a statistically significant relationship between the foreclosure rate in a county and the following demographic and economic attributes: the immigrant share of the population; the immigrant homeownership rate; the native-born Hispanic homeownership rate; the unemployment rate; the change in home prices; the average loan-to-income ratio; the percent of home purchase loans to Hispanics that are higher priced; and the percent of home purchase loans to blacks that are higher priced.46

Table 11 shows how a specific change in a county characteristic is related to the foreclosure rate. The first column of data in Table 11 is the simple average of a variable across U.S. counties. For example, the simple average of the unemployment rate in U.S. counties in 2008 is 5.7%.47 The second column of data contains mean values for the same variables in a hypothetical county. The unemployment rate in the hypothetical county is assumed to be 6.7%, or 1 percentage point higher than the rate in a typical county. Similarly, the loan-to-income ratio in the hypothetical county is assumed to be 3.2 instead of the typical ratio of 2.2, and so on for the other variables.

The final column of data in Table 11 shows the change in the foreclosure rate associated with the assumed change in a demographic or economic attribute. The notable findings are as follows:

The statistical model contributes to an understanding of why foreclosure rates are high in several counties. Tables 12 and 13 compare two counties—Miami-Dade, Fla., and Sacramento, Calif.—with the average U.S. county. The foreclosure rates in those two counties were high—5.2% in Miami-Dade and 6.0% in Sacramento—compared with 0.6% in the average county. The analysis in these tables, which repeats the exercise from Table 11, shows that different factors contributed to the high rates of foreclosures in Miami-Dade and Sacramento. 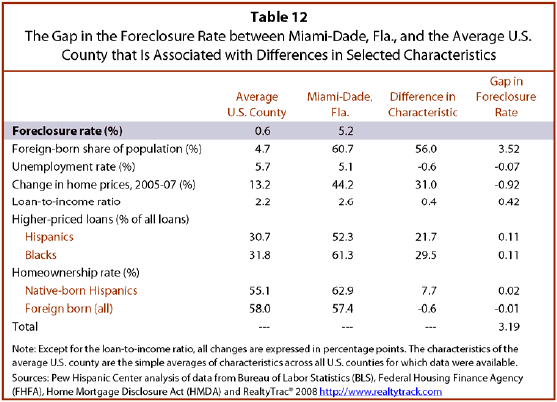 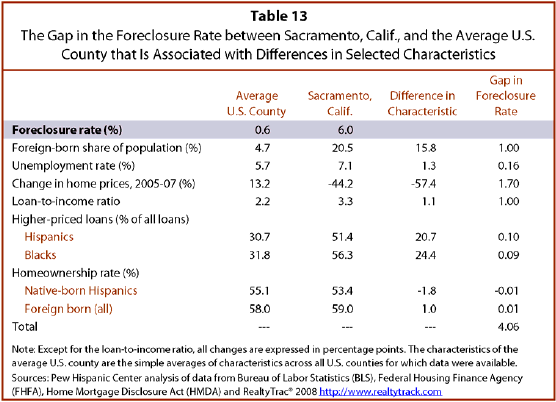 Overall, the statistical model points to some, but not all, of the reasons that foreclosure rates in some counties may be higher than in others. Some indicators in the model may not necessarily send the perfect signal. For example, a local economic shock may cause some people to lose their jobs and place their properties in foreclosure. But if they choose to leave the county, the unemployment rate in the county, measured only among current residents, may not increase. Thus, the measured unemployment rate will fail to reflect the underlying economic reason for foreclosures in that county.

Another factor in the model—higher-priced lending activity in 2006—may not yet have had its fullest impact. Research shows that it takes about five years into the term of subprime loans for foreclosure activity to near a peak (Schloemer, Li, Ernst and Keest, 2006). For example, the true cost of many subprime loans is not felt until initially low teaser rates expire some years into their terms.

However, it is also possible that the presence of immigrants serves merely as a stand-in for underlying circumstances not otherwise captured in the data. In recent years, the construction boom attracted immigrants in large numbers into new settlements in the U.S. (Kochhar, Suro and Tafoya, 2005; Frey, Berube, Singer and Wilson, 2009) Many of these areas, such as those surrounding Las Vegas and Atlanta are now witnessing sharp reversals in construction and high rates of foreclosures. The increased presence of immigrants in an area may simply signal the effects of a boom-and-bust cycle that has raised foreclosure rates for all residents there. Thus, it is not possible to affirm that immigration levels in and of themselves raise foreclosure rates.49

Next: Appendix A: Data Tables
← Prev Page
Page1Page2Page3Page4You are reading page5Page6Page7
Next Page →

The Wealth of Hispanic Households: 1996 to 2002
Latino Jobs Growth Driven by U.S. Born