The growth in subprime lending in recent years is considered responsible for both raising homeownership rates among minorities and contributing to the wave of foreclosure since 2005. Loans originating in the subprime market are intended for high-risk borrowers who typically have poor credit histories, low incomes and savings, or other financial limitations. Thus, subprime loans can make homeownership possible for applicants who might not qualify for mainstream loans (Bostic and Lee, 2008; Gramlich, 2007).

However, subprime loans are also susceptible to higher rates of default. Many high-risk or low-income borrowers are eventually unable to maintain payments on loans that carry higher interest rates. Several studies have demonstrated that subprime loans experience higher rates of foreclosure and that the risk of foreclosure remains elevated several years into the term of the loan (Schloemer, Li, Ernst and Keest, 2006).

This section spotlights major trends in mortgage lending in 2006 and 2007, the latest years for which data are available. The analysis is based on data gathered under the provisions of the Home Mortgage Disclosure Act (HMDA). The HMDA data encompass about 80% of lending activity in the U.S. for home purchase and refinancing.22

The HMDA data identify a set of products known as higher-priced loans because they carry an annual percentage rate (APR) above a specific threshold.23 The determination is made by comparing the APR on a loan with the rate on a U.S. Treasury security of comparable maturity. The threshold varies by the type of loan. A first-lien loan is considered higher priced if the interest on it exceeds the rate on the comparable Treasury security by 3 percentage points or more. The threshold for a second-lien loan is 5 percentage points.

The focus of this section is on home purchase loans only; refinance loans are excluded. Moreover, the analysis is confined to first-lien conventional home purchase loans for one- to four-family homes intended for owner occupancy.24 Examples of specific types of loans not included in the analysis are loans for purchase of manufactured homes and loans for home improvement. Thus, the data presented in this section are not meant to represent the universe of home mortgage loans.

The decline in loan applications and originations was greater among minorities than among whites.26 Applications from Hispanics fell 38.2% from 2006 to 2007, and applications from blacks decreased 34.4%. This most likely reflects the fact that the drop in lending in 2007 was more severe in the subprime market and that Hispanics and blacks are disproportionately served in that market compared with their share of applicants (see Table 5 and Figure 14 below).

A striking aspect of the changes in 2007 is that, among minorities, lending activity dropped most for high-income homebuyers (Table 2). Among Hispanics, loans originated to the highest income homebuyers decreased at a faster rate (49.3%) from 2006 to 2007 than did loans to the lowest income buyers (21.2%).27 Unfortunately, the HMDA data do not contain enough detail on loan and borrower characteristics to determine the reasons behind this trend. 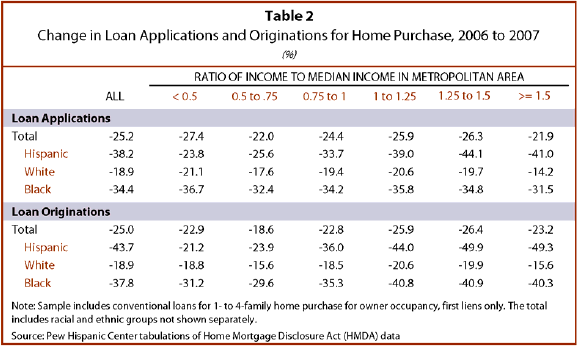 Loans Originated and Their Size, by Race and Ethnicity, 2007 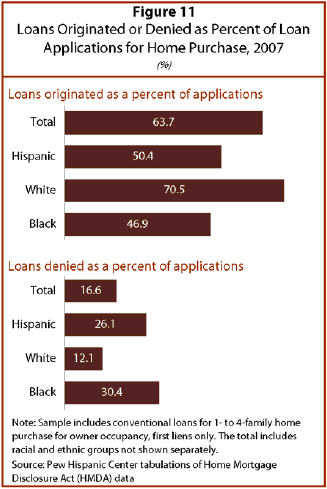 The income of Hispanic and black applicants does not seem to affect the likelihood of denial. In 2007, the denial rate for Hispanics in the highest income groups was 27.7%, about the same as the rate for Hispanics in the lowest income group (29.0%). Similarly, black applicants, regardless of income, faced a denial rate of about 30% (Table 3). Meanwhile, the denial rate for high-income whites (10.8%) was only about half as much as the rate for low-income whites (19.7%). Thus, based on denial rates, the disparity in lending between minority and white households in 2007 increased with income. 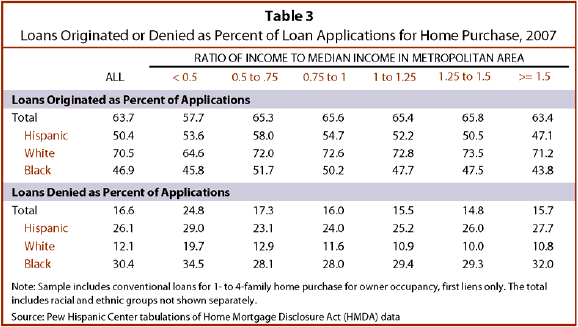 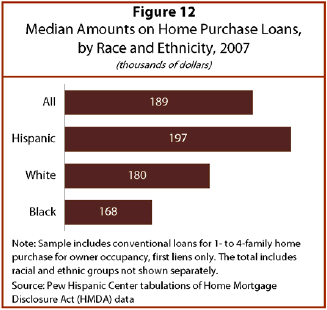 Notwithstanding higher denial rates, home loans made to Hispanics in 2007 were for larger amounts than loans made to whites. The median loan to Hispanics was $197,000 compared with $180,000 to whites and $168,000 to blacks (Figure 12). Within most income categories, however, there is little difference in the amounts loaned to Hispanics and blacks. Both minority groups in each income category received larger loans than did whites in that category (Table 4).31

Geography helps to explain why Hispanic homebuyers borrow more on average than whites do. California, Texas, Florida, Arizona, Illinois, New York and New Jersey accounted for 70.7% of loans that originated to Hispanics in 2007, compared with 32.9% for whites. With the exception of Texas and Arizona, these states either are uniformly higher priced (such as California) or have higher-priced pockets (such as Chicago).32 Thus, the greater concentration of Latinos in higher-priced areas makes it more likely that they will borrow greater sums. 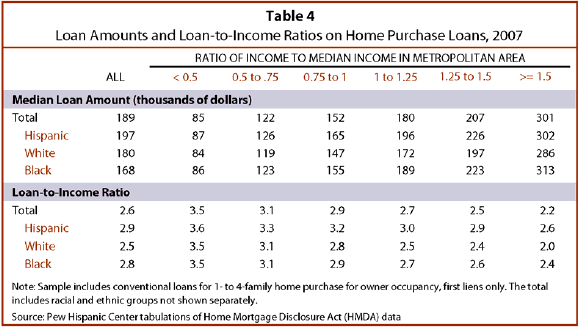 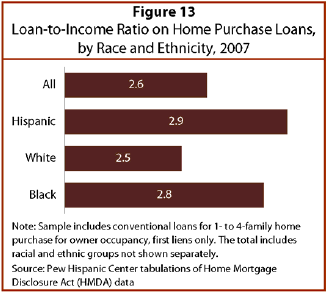 Another likely explanation is that minority households have fewer resources of their own to commit to a home purchase.33 That is also one of the reasons Latino and black households are more likely to seek loans in the subprime market that require low down payment.

The result is that Hispanics and blacks who want to buy homes face greater financial exposure than whites (Figure 13). The 2007 loan-to-income ratio among Hispanics (2.9) and blacks (2.8) was higher than among whites (2.5). This was true even within individual income groups (Table 4). In fact, the loan-to-income ratio of high-income Latinos (2.6) was 30.0% higher than that of high-income whites (2.0). 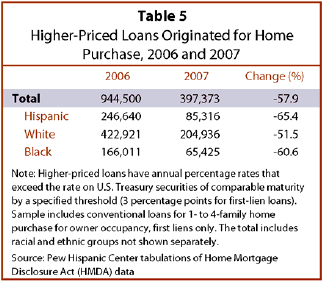 As a result, the share of higher-priced loans in overall lending also fell sharply—from 25.3% in 2006 to 14.2% in 2007 (Figure 14). A potential benefit of this development is that it probably will reduce the future risk of default in the mortgage market. 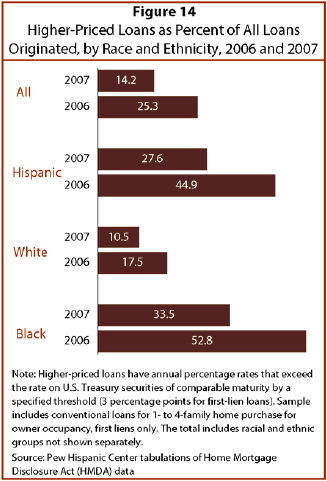 The declining share of higher-priced lending is evident for all racial and ethnic groups. In 2007, 27.6% of all loans originated to Hispanics were higher priced, as were 33.5% of loans to blacks and 10.5% of loans to whites. For each group the share of higher-priced lending was greater in 2006—44.9% for Hispanics, 52.8% for blacks and 17.5% for whites. 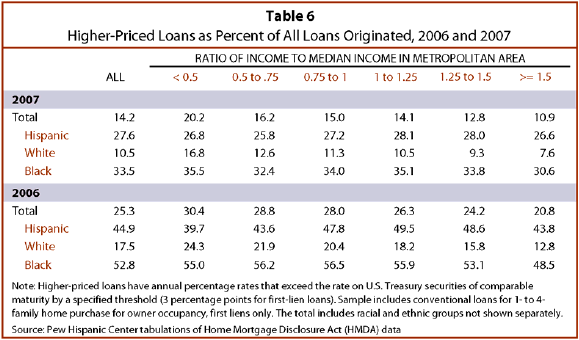 The Cost of Higher-Priced Loans

Next: V. Foreclosures in the U.S. in 2008
← Prev Page
Page1Page2Page3You are reading page4Page5Page6Page7
Next Page →