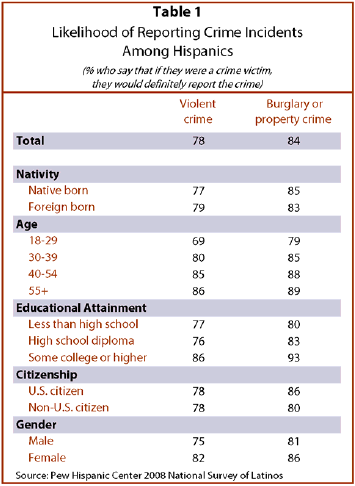 Personal crime victimization rates among Hispanics in 2006 (28.4 per 1,000 individuals) were higher than the rates for whites (23.9 per 1,000) and lower than the rates for blacks (32.9 per 1,000 individuals), according to the Bureau of Justice Statistics’ National Crime Victimization Survey (NCVS). While Hispanics were more likely than whites to state on the NCVS that they were a victim of a personal crime in 2006, they were less likely (41.6%) to say they reported the incident to the police than white (48.3%) or black (55.0%) victims. Victimization and police reporting rates for whites and blacks include the Hispanic portions of those populations.

In 2006 there were 6.3 million personal crimes and 19 million property crimes in the United States, according to the NCVS. Overall, the national personal crime rate per 1,000 individuals ages 12 or older was 25.4, and the national property crime rate per 1,000 households was 160.5.The NCVS, an annual survey of more than 70,000 U.S. households, is the most comprehensive survey of criminal victimization available. Respondents are asked about all criminal incidents in that calendar year, including those not reported to the police, in which they were a victim.

When asked if they would report a burglary or property crime to the police if they were a victim of that crime, more than eight-in-ten (84%) Hispanics say they definitely would. A greater share of Latinos ages 30 and older, compared with Latinos ages 18 to 29, say they would definitely report a burglary or property crime—87% versus 79%. Latinos with at least some college education are more likely than those with less than a high school diploma to say they would report such a crime—93% versus 80%. 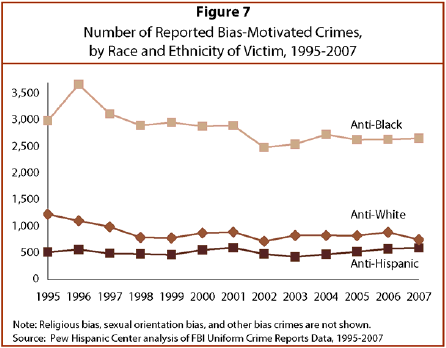 Next: IV. Contact with the Criminal Justice System
← Prev Page
Page1Page2You are reading page3Page4Page5
Next Page →

Hispanics and the Criminal Justice System
2008 National Survey of Latinos: Hispanic Voter Attitudes
Between Two Worlds: How Young Latinos Come of Age in America
Latinos and Education: Explaining the Attainment Gap
Public Libraries and Hispanics
So far, Trump has granted clemency less frequently than any president in modern history
How people around the world see the U.S. and Donald Trump in 10 charts
Quiz: Where do you fit in the political typology?
In past elections, U.S. trailed most developed countries in voter turnout
5 facts about the QAnon conspiracy theories