The Import of School Racial/Ethnic Diversity

The extent of interracial and interethnic contact in American schools has been a landmark educational and social policy issue for decades. Broadly, at least three reasons have been advanced for why enhanced interracial and interethnic contact might be beneficial (Clotfelter, 2004). First, schools differ in their levels of resources and the quality of their teachers. They vary in the size of their student bodies, pupil-to-teacher ratios, per-pupil spending and curriculum offerings, as well as the training, turnover and experience of their instructional staff. When students of different racial/ethnic background do not attend the same schools, the potential exists that they also may not attend the same type of schools, i.e., schools of similar quality and level of resources. Though enhanced interracial interaction is not the only remedy to address differences in school quality, racial differences in school quality (at least at the school level, though not necessarily at the classroom level due to academic tracking policies) cannot exist if schools are racially balanced. Second, aside from differential access to school quality, the racial composition of schools may matter in and of itself. That is, there may exist “peer effects,” or minority students’ learning may benefit from having high-achieving peers. This is not asserting that minority students per se are low-achieving students because of their race/ethnicity. Rather it acknowledges that minority status is correlated with lower measured achievement (perhaps because of lower levels of parental education, lower academic expectations and other factors), and high test-scoring peers (who, on average, are white) may directly enhance student learning. In short, classmates may matter. Some evidence suggests that racial imbalances in peers have significant effects on minority student achievement (Hanushek and Rivkin, 2006; Harris, 2006). Third, in regard to the general principle of the desirability of racial/ethnic mixing in public schools, public opinion surveys reveal that adults by large margins support having America’s racial/ethnic mix represented in the student bodies of public schools (Elam, Rose and Gallup, 1996). 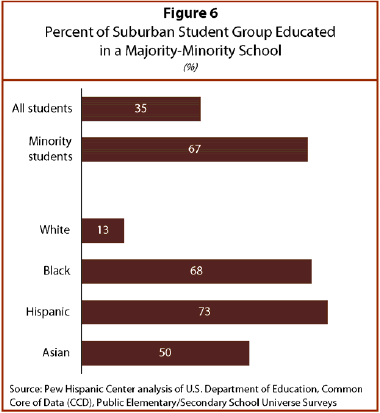 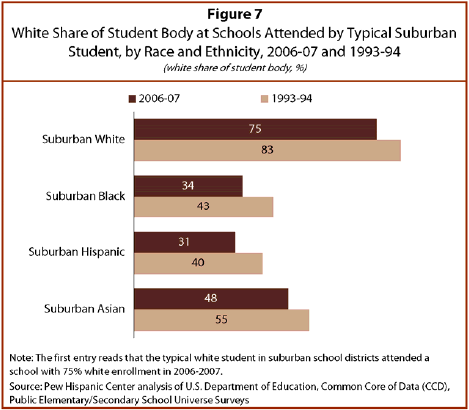 Though minority students have less exposure to white students in 2006-07 than in 1993-94 (Figure 7) does not necessarily mean that they are increasingly isolated in suburban schools. That is, suburban minorities need not necessarily be attending schools with students of the same race/ethnicity as themselves. Aggregate enrollment figures indicate substantial growth of suburban Hispanic students and, at the school level, suburban students of any racial/ethnic identity increasingly tend to have Hispanic classmates. Suburban black student isolation has only slightly increased. In 2006-07, the typical suburban black student attended a school that was 44% black, up from 43% black in 1993-94 (Figure 8). Suburban Asian students have experienced a small decline in isolation. In 2006-07, the typical suburban Asian student attended a school that was 23% Asian, down from 24% Asian in 1993-94. Suburban Hispanic student isolation has significantly increased. In 2006-07, the typical suburban Hispanic student attended a school that was 49% Hispanic, an increase from 42% Hispanic in 1993-94. 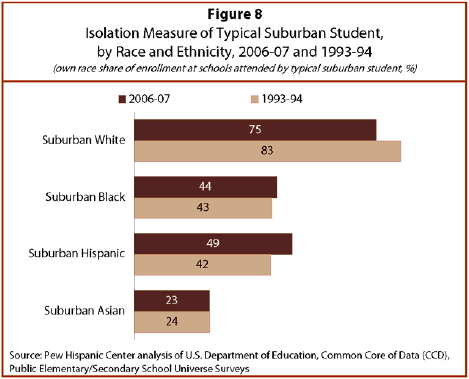 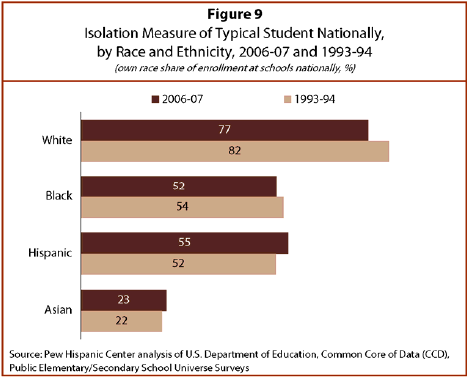 One of the most commonly used measures of school segregation is the dissimilarity index, which measures the evenness of the spread of students across schools in a school district. It ranges from 0 (complete integration) to 1 (complete segregation). Specifically, the index is the fraction of students in a group that would have to change schools for all schools in a district to have the same percent of that group as the school district overall. The index is usually calculated for areas that have at least a minimum population threshold. Table 7 reports an average of the dissimilarity index across school districts. Each school district needed to have at least 1,000 students of the particular group to be included in the average. 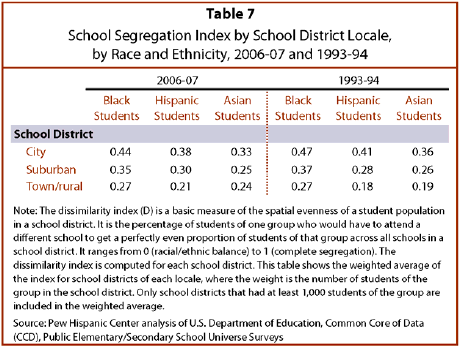 Although the isolation measure and dissimilarity index are capturing different dimensions of school segregation,3 they generally present a consistent trend for understanding recent changes in the composition of suburban schooling. Suburban Hispanic students are increasingly less evenly spread across the schools of many suburban school districts, and suburban Hispanic students increasingly have less potential contact with non-Hispanic students. For Asian and black suburban students, there has not been a large change in their exposure to students of other race/ethnicities or in their dispersion across suburban school districts. Like all suburban students, Asian and black students have less opportunity to interact with white students. 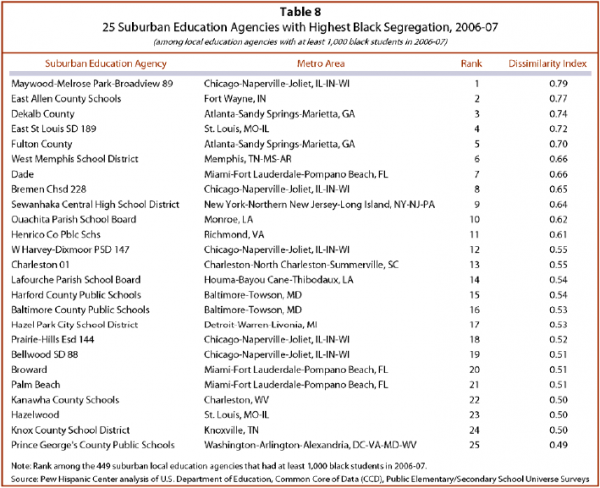 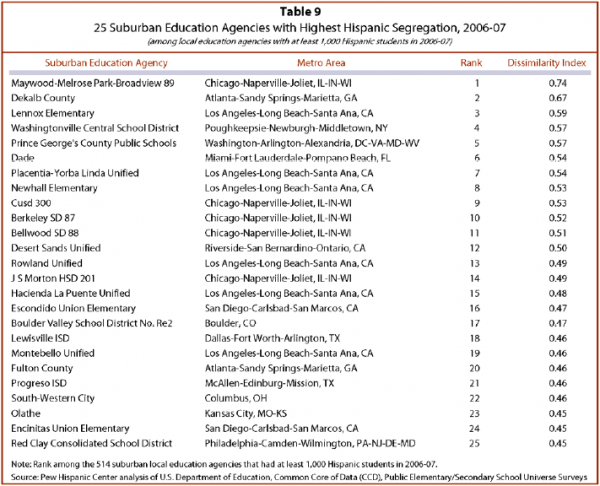 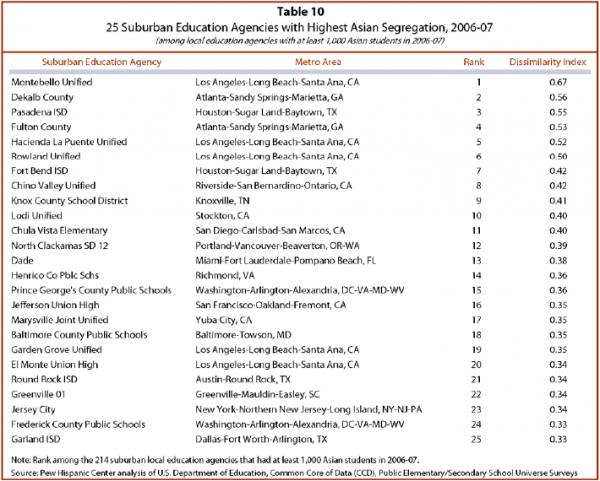 The Prince George’s County public school system outside Washington, D.C., is a large suburban school district that has relatively high measured levels of segregation of each of its black, Hispanic and Asian student populations.

Next: Appendix A: Data Source
← Prev Page
Page1Page2Page3Page4You are reading page5Page6Page7
Next Page →