The distribution of offenders’ crimes was substantially different for Latinos who held U.S. citizenship and those who did not. In 2007, more than half (56%) of Hispanic offenders with U.S. citizenship were sentenced for drug offenses, 14% for immigration offenses and 30% for all other offenses. In contrast, more than six-in-ten (61%) non-citizen Latino offenders were sentenced for immigration offenses, 30% for drug offenses and 9% for violent, property, white collar and fraud, firearms and other offenses.

Beginning in 1995, the Immigration and Naturalization Service (INS) implemented an initiative called Operation Gatekeeper, which was designed to increase border security. Since that time, the number of immigration offenders in federal courts has increased from less than 10% of all cases prior to 1996 to 24% in 2007 (USSC, 2004). 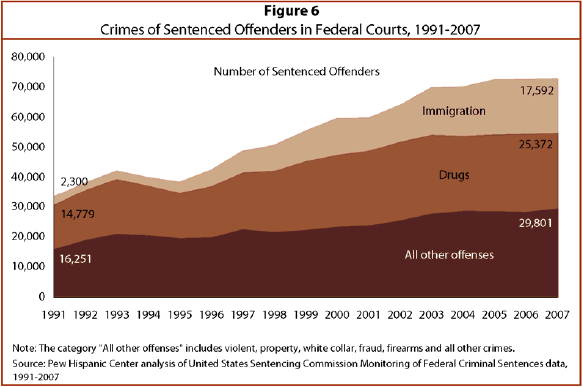