Nationwide, aggregated exit poll results from 16 Super Tuesday Democratic primaries show that 63% of Latinos voted for Clinton and 35% voted for Obama. Clinton’s biggest margin of victory among Latinos was in her home state of New YorkNationwide, York, where she drew 73% of the Hispanic vote. She won 68% of the vote in Puerto Rico, 67% of the Latino vote in California and 66% in Texas. She won 59% in Florida, a state where neither candidate actively campaigned because of an intra-party dispute over the timing of the primary.

Obama narrowly won the Latino vote in his home state of Illinois on Super Tuesday—50% to Clinton’s 49%. 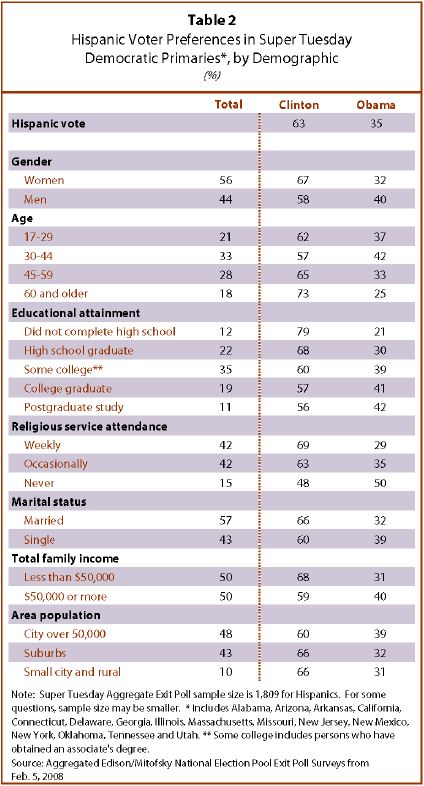 Clinton’s support has come from virtually all demographic components of the Hispanic Democratic primary electorate. One finding that stands out from the aggregated Super Tuesday exit polls is that Latinos ages 17 to 29 were as likely as Latinos overall to vote for Clinton—63% versus 62%. In Texas, support for Clinton among young Latinos was lower than on Super Tuesday, though Clinton did win among young Latino voters there (51% versus 48% for Obama). And, as noted above, Latinos ages 17 to 29 comprised 21% of all Latinos voting in primaries on Super Tuesday.

Hispanic women also favored Clinton on Super Tuesday—67% versus 32% for Obama, with women making up 56% of the Hispanic electorate that day.

Clinton’s support among Latino women was similar across age groups. Young Latino men ages 17 to 29, however, split their vote evenly between Clinton and Obama. 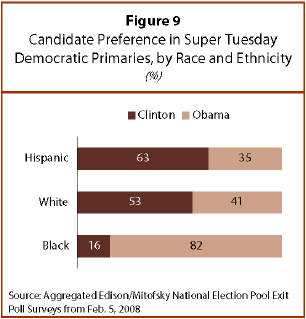 The economy has been foremost in the minds of many voters this primary election season, more so among Hispanic and black voters than among whites. Yet, the importance of the economy appears to have meant something different to Hispanic voters than to white voters. Among Hispanics who said that their family is getting ahead financially, Clinton was the preferred candidate. By contrast, white voters who said they were getting ahead financially favored Obama. 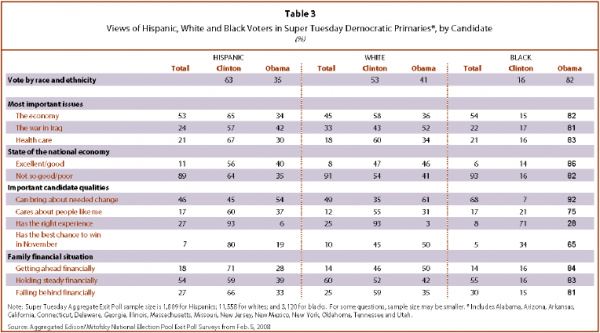 The candidate quality that was most important to all three groups in deciding their vote was the ability to “bring about needed change.” But this mattered less to Latinos (46%) and whites (49%) than it did to blacks (68%). Also, Latino voters who favor change supported Obama by a smaller margin than did black and white “change” voters. Of those Latinos who said change was the candidate quality that mattered most, 54% voted for Obama and 45% voted for Clinton. Obama won the white “change” vote by a bigger margin—61% to Clinton’s 35%. Among black “change” voters, Obama won 92% of the votes to Clinton’s 7%. 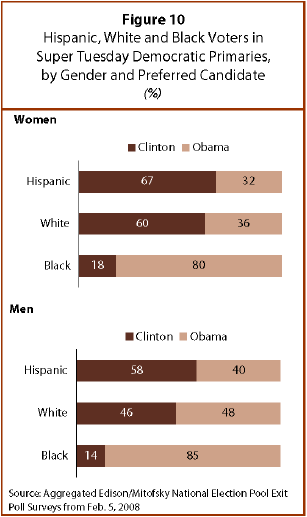 For Obama, young voters overall have been a key base of support, but, as noted above, this base was smaller among Latinos than other groups on Super Tuesday. Young Latinos, ages 17 to 29, were less likely to vote for Obama on Super Tuesday than were young white and black voters—37% of Latinos versus 57% of whites and 84% of blacks.

Race and gender are two issues that were in the forefront of some voters’ minds on Super Tuesday, with gender appearing to have affected voting more than race.