Latinos are generally upbeat when they evaluate their personal quality of life. They tilt toward the negative when they assess recent changes in the overall situation of Hispanics in the United States, but they are broadly optimistic that Latino children will grow up to have a better standard of living than they themselves have now. Latinos who are the most attached to the U.S.—by virtue of being native born, English dominant in their language usage or citizens—are generally the most satisfied with their lives and the most positive about the situation of all Latinos, while those who are less attached, and those with lower socioeconomic status, tend to be less upbeat. An exception to this pattern occurs in regard to perceptions of future prospects for Latino children: on this question, optimism prevails across all subgroups. 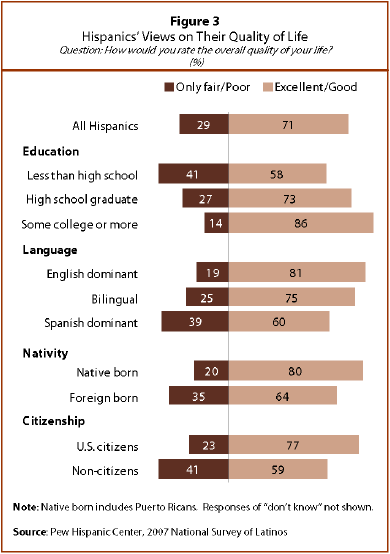 When queried about the quality of their own life, seven-in-ten Latinos report that it is either excellent (26%) or good (45%), while about three-in-ten say it is only fair (27%) or poor (2%). Though these numbers are somewhat lower than the quality of life ratings among the general population,5 they paint a broadly positive portrait of Latino life satisfaction.

Attachment to U.S. society is also positively associated with quality of life assessments. Some 80% of native-born Latinos rate their life quality as excellent or good, compared with 64% of the foreign born. The same holds true for citizenship—77% of citizens (including the native born) report that their life quality is good or excellent, compared with 59% of non-citizens. Correspondingly, respondents who are English dominant or bilingual are significantly more likely than their Spanish-dominant counterparts to report a good or excellent quality of life. About eight-in-ten English-dominant or bilingual respondents say that their lives are excellent or good, compared with six-in-ten Spanish-dominant respondents. 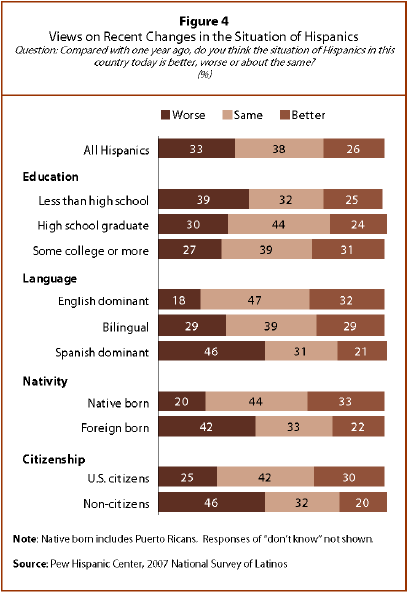 While Latinos provide generally positive evaluations of their personal quality of life, their responses are more varied regarding the situation of U.S. Latinos as a whole. Their assessments are slightly more negative than positive when asked about changes in the circumstances of U.S. Latinos over the past year, but their expectations about the future for Latino children reveal a widespread optimism.

Generally, respondents with higher socioeconomic status look upon the past year more favorably than those at the lower end of the spectrum. Respondents with some college education are more likely to report that the situation of Latinos improved over the past year (31%). Conversely, almost four-in-ten (39%) of those lacking a high school diploma feel that the situation of Latinos has worsened over the past year. The same pattern appears with regard to income. About 35% of respondents earning $50,000 a year or less report that conditions have worsened, compared with just 22% of those earning more than $50,000 a year. 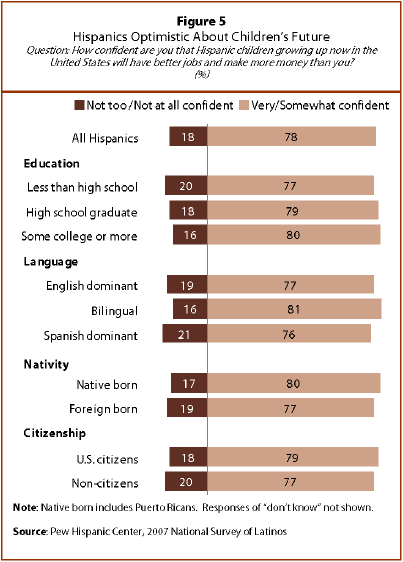 While views about the recent past are mixed, Latinos are resolutely optimistic about the future. Seventy-eight percent report that they are somewhat or very confident that Latino children growing up now in the United States will “have better jobs and make more money” than they themselves. A much smaller proportion of respondents—18%—report that they are either not too confident, or not at all confident, about the future prospects for Latino children.

This sense of optimism is pervasive, regardless of a respondent’s present circumstances. High school dropouts, high school graduates and people with college experience are equally likely to expect that Latino children will surpass their own achievements. The same is true across income levels: approximately eight-in-ten respondents, regardless of their own annual income, are very or somewhat confident that their children will have better jobs than they do and will make more money.

Next: IV. The Immigration Debate
← Prev Page
Page1Page2You are reading page3Page4Page5Page6Page7
Next Page →

2007 National Survey of Latinos: As Illegal Immigration Issue Heats Up, Hispanics Feel a Chill II. By the Numbers: Trends in Enforcement
III. Quality of Life for Latinos
Personal Quality of LifeGroup Evaluations—Present and Future
IV. The Immigration Debate V. Views About Immigrants IV. Perceptions of Discrimination Appendix A: Survey Methodology