Even as Latino immigrants remain connected to relatives and friends in their country of origin, they develop attachments to the U.S. The results of this study clearly demonstrate that this is not an either/or proposition. Immigrants who maintain ties to their countries of origin also cultivate attitudes that show they are putting down psychological roots in the U.S. Immigrants who have been in this country for many years are more likely to express attachment to the U.S. than are recent arrivals. 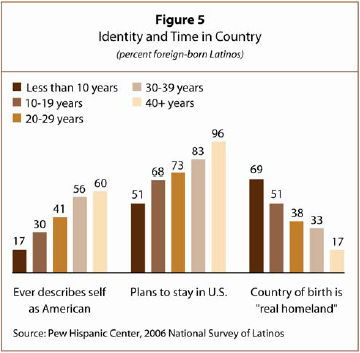 As demonstrated above, longer residence here is associated with lower levels of some cross-border activities—telephoning and remittance sending in particular. But the shift is not absolute. Just as significant shares of long-term immigrants engage in cross-border activities, many also maintain a sense of identification with their native land even after many years in the U.S. Moreover, this is not a uniform process, as different measures show differing results in the extent to which immigrants associate themselves with the U.S. Overall, the survey results reveal a dynamic process that often produces a mix of identities and attachments.

Perhaps the simplest measure of attachment to the U.S. involves how long an immigrant plans to stay in the country. Two-thirds of Latino immigrants say they plan to live here for good. While many newcomers often arrive uncertain about settlement prospects, just over half of immigrants who have been in the U.S. for fewer than 10 years say they plan to stay for good. Expectations for settlement rise consistently with years spent in the U.S. (Figure 5). Among the most established residents (in the U.S. for 30 years or more), the great majority intend to stay for good, even though many maintain home country connections through telephone calls, travel and remittances.

Another measure of attachment that shows a considerable shift involves the focus of immigrants’ political concerns. Six-in-ten immigrants (60%) say they are more concerned about politics and government in the U.S. than in their country of origin. Recent arrivals and long-term residents differ little in this respect—in contrast to their responses to many other matters. Likewise, citizens are barely distinguishable from non-citizens in the extent to which their political preoccupations are focused on the U.S. 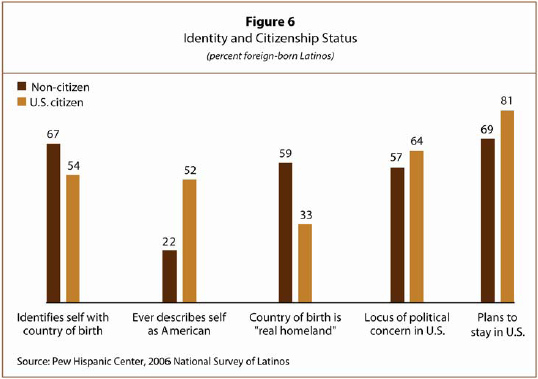 A slower shift is evident in immigrants’ sense of homeland, and this measure of attachment responds to different influences. Overall, half (49%) say they consider the country where they were born to be their “real homeland,” while 38% cite the U.S. As time spent in the U.S. increases, however, the proportion answering “the country in which I was born” steadily drops. While seven-in-ten (69%) of those with fewer than 10 years in the U.S. say their “real homeland” is their country of birth, that proportion falls to a third or less among those who have lived in this country for 30 years or more (Figure 5).

Latino immigrants who have become U.S. citizens respond very differently than non-citizens in how they identify their homeland. Among non-citizens, 59% say their “real homeland” is their country of birth, compared with 33% of citizens (Figure 6). A substantial commitment to the U.S. is inherent in the act of becoming a citizen, and so it is logical that a majority of immigrants who have naturalized have shifted their sense of “homeland.” The fact that a third of naturalized citizens continue to look to the country of their birth is further evidence that maintaining connections to a native land is not necessarily the dominant factor in determining attitudes and behaviors among immigrants.

The survey explored personal identity by asking respondents about the terms they use to identify themselves, offering three options: country of origin (e.g., Mexican or Cuban); the pan-ethnic terms (Latino or Hispanic); or “Americans.” Respondents were asked whether they ever used any of those terms to identify themselves and, of those terms, which one they generally used first. The results show that immigrants avail themselves of all three, to varying degrees and in varying ways, depending on length of residence in the U.S.

Rather, for most immigrants, the core identity is linked to the country of birth. Virtually all respondents (94%) describe themselves as nationals of their native land, and that proportion remains stable regardless of years in the U.S. When given a choice, most (62%) also describe themselves as home country nationals first. While that proportion declines with years spent in the U.S., home country identity predominates even among long-term immigrants.

Use of the terms “Hispanic” or “Latino” is more prevalent than the term “American,” but the pan-ethnic labels are less common than identification with country of origin. Almost three-in-ten (29%) say the first term they use to describe themselves is “Latino” or “Hispanic.” In contrast to the use of “American,” this form of self-identification changes little over time.

In sum, responses to questions about nationality identity and attachments again underline the fact that home country and host country options coexist among many immigrants and may indeed be mutually compatible. On the one hand, most immigrants say that their lives and futures are to be found in the U.S. And, apparently realizing that conditions in the U.S. will determine their futures, most say their political preoccupations are mainly focused in their adopted country. On the other hand, most don’t feel fully American, naming their country of their birth as their homeland and identifying themselves in terms of that nationality. This core identity with a native land appears very resistant to change among people who were born in another country and in most cases lived there until they were young adults.

When it comes to children’s well-being, Hispanic immigrants are generally optimistic about life in the U.S., but when they compare the U.S. to their native lands, views are much more mixed. The ambivalence evident in these findings is once again indicative of the ways in which immigrants balance emotional ties to two nations.

There is a good deal of consensus on these matters. Among both citizens and non-citizens, large majorities are positive about future prospects for Latino children. Widespread optimism is found among newcomers and long-established residents alike.

The U.S. is overwhelmingly favored, however, when it comes to political traditions. More than 10 times as many Latino immigrants say that the traditions are better in the U.S. than in their country of origin (55% versus 5%). Meanwhile, nearly a third (32%) judge the two countries as the same.

As with the measures of optimism regarding children’s future, there is little difference between the views of immigrants who have become U.S. citizens and those who have not. Further, responses do not vary greatly according to the amount of time a respondent has been in the U.S.

These responses again point to the multidimensional relationship immigrants have with the U.S. and their home country and the extent to which they maintain attachments to both. When survey questions refer to personal well-being of Latino children growing up in the U.S., clear majorities of immigrants see an optimistic future. But when the questions compel them to compare the two societies, immigrants are much more reluctant to give their home countries an unfavorable rating except when it comes to political traditions. Instead, their evaluations of moral values and racial/ethnic relations are divided.

As with national identity, these responses suggest that immigrants are looking for a middle way, trying to find a solution that will reconcile their new U.S. lives and their continuing attachments to the places where they grew up and where so many of their relatives and friends still live.

Between Here and There: How Attached Are Latino Immigrants to Their Native Country?
U.S. Unauthorized Immigrant Total Dips to Lowest Level in a Decade
More Mexicans Leaving Than Coming to the U.S.
Overall Number of U.S. Unauthorized Immigrants Holds Steady Since 2009
Rise in U.S. Immigrants From El Salvador, Guatemala and Honduras Outpaces Growth From Elsewhere
So far, Trump has granted clemency less frequently than any president in modern history
How people around the world see the U.S. and Donald Trump in 10 charts
Quiz: Where do you fit in the political typology?
In past elections, U.S. trailed most developed countries in voter turnout
5 facts about the QAnon conspiracy theories