Remittances, or the money sent by immigrants to relatives in their country of origin, are a topic of great interest because of the size of the financial flow. According to the Bank of Mexico, in 2006 Mexicans alone received $23 billion in family remittances, almost all of it dispatched from the U.S.

Just over half of the Latino immigrant population sends remittances. This activity is most common among new arrivals and least so among those of long tenure here. However, a large minority of long-settled immigrants continue to send money to relatives in their native lands.

Among the most recent arrivals—those with 10 or fewer years in the U.S.—63% send remittances. That proportion declines to 48% among those with 20 to 29 years of residence. Among those who have lived in the U.S. for 30 years or more, 33% continue to send money to relatives in their country of origin.

While remittance activity is common among all nationalities, there is a good deal of variation (Figure 4). Cubans are a little more than half as likely as Salvadorans to send remittances (39% versus 70%), but again U.S. law restricts this form of transnational activity by Cubans. 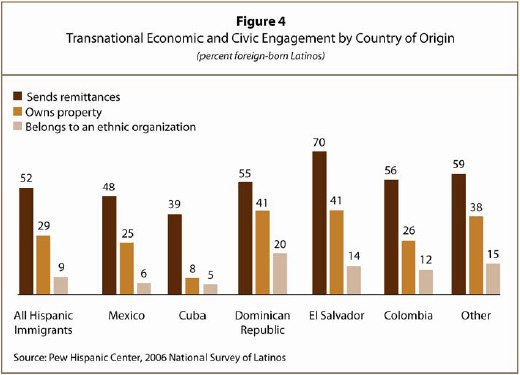 Ownership of property in the home country is common among Hispanic immigrants, with Cubans the expected exception. Property ownership also varies greatly by years of residence.

Among the most recent arrivals, 39% report owning property in their country of origin. By contrast, only 4% of long-established immigrants do so. Consistent with their high level of remittances, Salvadorans report a high level of property ownership (41%), with Dominicans at a similar level (Figure 4).

While most Latino immigrants actively maintain ties to family and friends, they are much less likely to be involved in any type of civic activity in the U.S. that is directly linked to their country of origin.

Overall, only 9% report belonging to a civic organization, social club or sports team of people from their native land. This kind of activity is sharply lower among those with many years of residence. About 12% of recent arrivals are involved, but that share decreases to 5% among those living in the U.S. for 20 to 29 years.

Activity levels also vary from one nationality to another. One-in-five Dominicans say they have some engagement with an immigrant civic or social organization, again displaying their high level of connectedness with their native land. By contrast, only 6% of Mexicans are similarly involved.