Latino evangelicals are twice as likely to be Republicans as are Latino Catholics. That is a far greater difference than exists among whites. Moreover, Hispanic conservatives who are Catholic favor the Democrats, while white conservatives consider themselves Republican regardless of religious tradition. To make the political portrait of Hispanics even more complex, national origin also plays a role. For some — Cubans and Puerto Ricans — political preferences are heavily influenced by ancestry, with religion playing less of a role.

Democrats have enjoyed a steady two-to-one advantage in party identification among Latinos nationwide for nearly a decade. However, in actual voting, Republicans have periodically narrowed that advantage. In the 2000 and 2004 presidential races and in the 2006 midterm elections, for example, Latino voting for the Republican Party has ranged from 30% to 40% on a national basis. In individual races, a number of Republican candidates in a variety of states have surpassed the 40% mark in Latino support.1

Those developments have led many commentators to label Hispanics as swing voters. At the very least, the results of recent elections show volatility at the margins of Latino voting patterns. The results of this study show that religion is an important factor in shaping Hispanic partisan preferences.

Party Identification: To determine political affiliation, respondents were asked: “In politics today, do you consider yourself a Republican, a Democrat, an independent or something else?”

Ideology: To determine political leaning, respondents were asked: “In general, would you describe your political views as very conservative, conservative, moderate, liberal or very liberal?”

Eligible Voters: All survey respondents were at least 18 years old. Those who responded positively when asked if they are a U.S. citizen were deemed eligible voters.

Registered Voters: Respondents who said they were U.S. citizens and that they are absolutely certain they are registered to vote were deemed registered voters.

This chapter examines party identification among Latinos as well as their views on how effective the two major parties are on several major issues. The analysis is made across several variables, including religious tradition, ideology, country of origin and frequency of church attendance. It also explores registration rates and views of President Bush, again across religious traditions and in relation to other factors.

Comparisons with non-Hispanics are based on data from the Pew 2006 U.S. Religion Survey, using the overall U.S. population and focusing on registered voters to assure full comparability. The rest of the analysis is based on data for Latinos who are eligible to vote; that sample is larger and allows for more detailed tabulations.

Measures of party identification in the U.S. population as a whole vary slightly over time, even though voting may shift between candidates of one party or another from one election to the next. Previous Pew surveys have shown that this pattern is also evident among Latinos, where the Democratic Party has steadily held a two-to-one advantage in polls going back nearly a decade.2 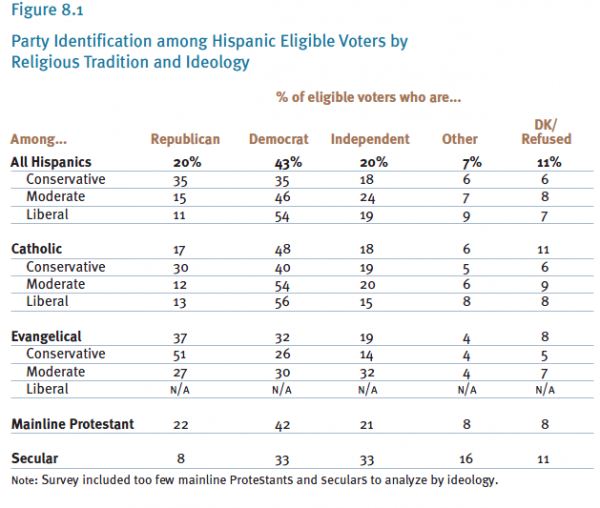 In this study, 43% of Hispanic eligible voters say they consider themselves Democrats, while 20% identify as Republicans and another 20% identify as independents. However, these partisan preferences vary according to religious tradition.

Party identification among Latino evangelicals is more narrowly divided and slightly favors the Republican Party. Among Hispanic eligible voters who are evangelicals, 37% say they consider themselves Republicans and 32% say Democrats. In the other religious traditions, the Democratic Party prevails among eligible voters — 42% vs. 22% among mainline Protestants, and 33% vs. 8% among secular Latinos.

A comparison with the Pew 2006 U.S. Religion Survey, using the same party identification measure, reveals a somewhat different interaction between partisan preferences and religious traditions among non- Hispanics. To make the most accurate comparisons across ethnic groups in the two surveys, the analysis uses data for registered voters. African-Americans represent a distinctive case because they favor the Democratic Party by overwhelming margins, regardless of religious tradition. Even among evangelicals, blacks split in favor of the Democrats by a 60-point margin. Consequently, this analysis focuses on contrasts between Hispanics and whites, two groups where party identification differs more widely by religious tradition.

While Latino Catholics heavily favor the Democratic Party over the Republican Party among registered voters (55% vs. 18%), the partisan split goes the other way — though much more narrowly — among white Catholics (32% for Democrats vs. 39% for Republicans).

Comparing the relative pattern in identification for the Democratic Party shows that the same is true for affiliation with the Catholic Church. Among Latino registered voters, the share identifying as Democrats is oneand- a-half times higher for Catholics (55%) than for evangelicals (36%). Among white registered voters, on the other hand, identification as a Democrat is about a quarter higher among Catholics (32%) than among evangelicals (25%). Here, too, religious affiliation is associated with a greater difference in party identification among Latinos than among whites.

Among Latino Catholics who have converted to evangelicalism, the partisan split is more similar to that of other members of their new religion than to the faith they left. While Democrats enjoy a significant advantage among Catholics, that is not the case among these former Catholics. In their case, the party preference is nearly an even split (35% for Republicans vs. 33% for Democrats).

Party preference by country of origin

Cubans are the only Latino group where the Republican Party does significantly better than the Democratic Party (49% vs. 24%) among eligible voters. Dominicans (50%) and Puerto Ricans (48%) are the most heavily Democratic while Latinos of Mexican descent — by far the largest country-of-origin group — also favor the Democrats (43% vs. 19%). In some but not all cases, these partisan alignments by country of origin are more significant than are associations by religious tradition. 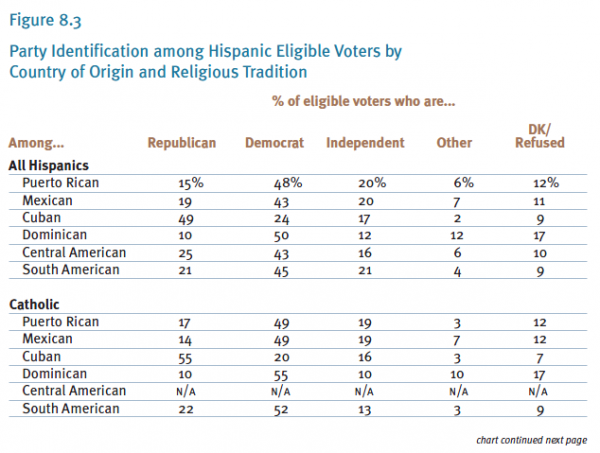 On the other hand, partisan preferences among Latino citizens of Mexican descent differ significantly according to religious tradition. Democrats have a sizable advantage among Mexican Catholics (49% vs. 14%). However, among Mexican evangelicals the partisan split goes the other way (47% for Republicans and 24% for Democrats).

Latino evangelicals are a striking exception to this pattern of Democratic dominance on issues. On five of the seven issues, Latino evangelicals give similar ratings to both political parties. Meanwhile, the Republican Party is judged best suited to improve morality in the country, although the margin over the Democratic Party is relatively small (42% vs. 36%). And, 43% of these eligible voters favor the Democrats on the environment, compared to 33% who pick the Republicans. 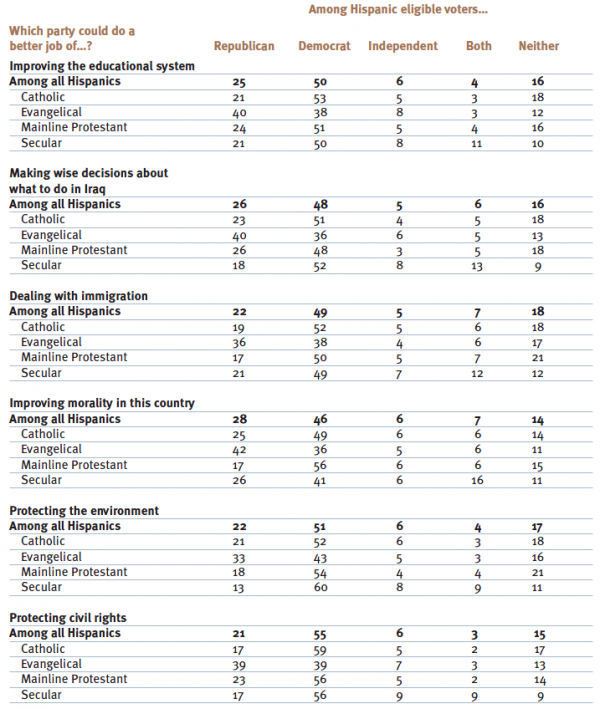 The patterns of partisan loyalty among Latino eligible voters of various religious traditions are mirrored in attitudes toward President George W. Bush. Catholics disapproved of the president’s performance by more than a two-to-one margin (62% vs. 27%), and the president’s ratings were only slightly better among mainline Protestants.

On the other hand, a majority of evangelical Latino eligible voters endorsed the job President Bush is doing (50% vs. 38%). The president did even better among evangelical voters who identify their ideology as conservative, with 63% approving of his performance. These findings are from a survey taken between Aug. 10 and Oct. 4, 2006, and the president’s approval ratings have been subject to change since then. 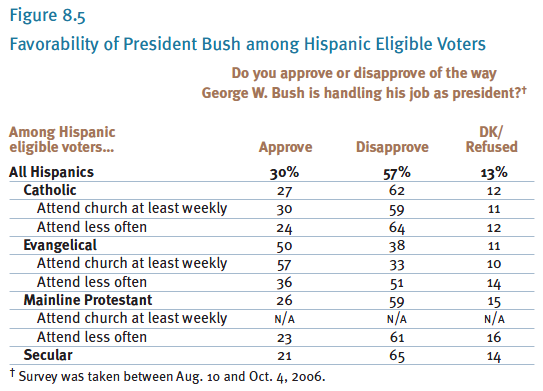 The difference is less pronounced for Latino Catholics. Those who attend church less often tend to be only slightly more disapproving of the president than those who are frequent churchgoers (64% vs. 59%). 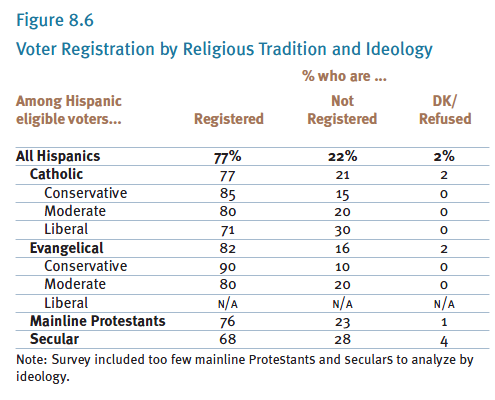