Among those eligible to naturalize, Mexicans constitute 3.0 million of the 8.5 million total, more than any one country or region. Because of their large representation among legal immigrants and their low naturalization rates, Mexicans also dominated this group in 1995. The next largest groups are immigrants from Asia and from Central American/Caribbean countries, each totaling 1.6 million (see Appendix Table 3).

Among those soon to be eligible to become citizens, the distribution by country and region generally is similar to that of the eligible population. Again, Mexico is an exception: Mexicans make up 23% of those who soon will be eligible, a lower share than among the currently eligible population. The low Mexican naturalization rate means they make up a disproportionately high share of eligible non-citizens.

Regardless of where they come from, adult immigrants are more likely to become citizens if they speak English well. According to 2000 Census data, 52% of eligible immigrants with limited English proficiency had naturalized.2 By contrast, 67% who said they were proficient at English had become citizens.

Among the naturalized population, those with limited English proficiency are a minority—less than 40%. But among Mexican-born U.S. citizens, 58% do not speak English well. Among immigrants who are eligible to naturalize or who soon will be, most have limited English skills. 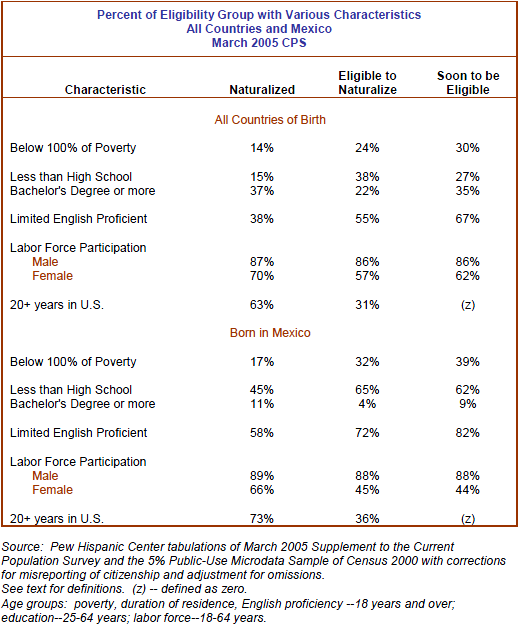 Education also raises the likelihood that an immigrant will become a citizen. Of eligible immigrants ages 25–64 with a college education, most have become citizens. Most migrants in that age group who did not complete high school have not naturalized.

Among naturalized citizens, 53% are female. Females also are a slight majority among those eligible and soon to be.

Immigrants with low incomes are less likely to become citizens than those with higher ones. Among naturalized Americans, 14% have family incomes below the poverty line and 35% have high incomes (at least four times the poverty level). Among those eligible to naturalize, a quarter (24%) are poor and 22% have high family incomes. Among those soon to be eligible, 30% are poor and 18% have high incomes.

Another way to compare the naturalized and eligible populations is to look at those with low incomes, defined as up to double the poverty level. Low-income immigrants make up a minority of those who have recently naturalized (38%). They are 52% of the population that is currently eligible to naturalize and 58% of those who will soon be eligible.